Documenting Äiwoo, the language of the Reef Islands 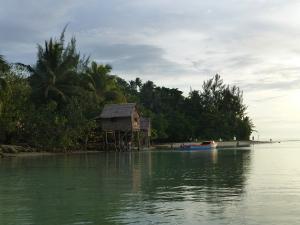 The collection consists of audio and video materials in the Oceanic language Äiwoo. The materials were recorded in September-October 2015 in eight villages in the Reef Islands: Otelo, Nyimââ, Laato and Nyiväle on Lomlom island, and Tuwo, Malubu, Tängä and Malapu on Fenua Loa (Ngäsinuwe) island. The materials focus on traditional life and culture in the Reef Islands and cover topics such as fishing, gardening, house building, food preparation, basket weaving, tattooing, politeness and avoidance, traditional medicine, childbirth, burial practices, marriage practices, maturation ceremonies for children and traditional village governance. There are also some traditional myths and morality tales (‘kastom stories’) as well as stories of personal experiences.

The data was collected by Åshild Næss, linguist and principal investigator, with the assistance of native speaker Luke Gitakulu who appears as an interviewer in many of the recordings. In addition to video and audio materials, the collection includes a freely downloadable dictionary prepared as part of the project and published by Asia-Pacific Linguistics (https://openresearch-repository.anu.edu.au/handle/1885/112469)

The speakers of Äiwoo live on the Main Reef Islands as well as in settlements on nearby Santa Cruz island, and in Solomon Islands’ capital Honiara. Archaeological and linguistic evidence suggests that they are descendants of one of the earliest migrations out of the Bismarck Archipelago, where Proto Oceanic was spoken, between 3,000 and 3,500 years ago. The Reef Islands are low-lying coral islets, and fishing and subsistence horticulture are the main ways of making a living. The Äiwoo speakers have long been in contact with speakers of Vaeakau-Taumako, a Polynesian Outlier language spoken in the small Outer Reef islands and in the Duff Islands (Taumako) some 100 km to the northeast. Traditionally, trading voyages in large sailing canoes tied the islands of the area, and their multiplicitry of languages, together; but these voyages were discouraged by the British colonial administration in the early 1900s, and today such canoes are no longer being built. These days the main language of communication between language groups is Solomon Islands Pijin, the English-based creole that functions as a lingua franca throughout Solomon Islands. The majority of Äiwoo speakers also speak Pijin, and code-switching is very frequent. Nevertheless, Äiwoo is still in daily use throughout the community. Perhaps the most immediate threat to the Äiwoo language is the rise of sea levels as a result of climate change, a process the effect of which is already being felt in the islands. The islands are already small, and the erosion of the shoreline and subsequent loss of land resources places additional pressure on the land. This is likely to force more people to move away from the islands, to Santa Cruz and Honiara, where they are more likely to live in mixed-language communities and use Pijin at the expense of their native Äiwoo.

Äiwoo is spoken by around 7-8,000 people in the Reef Islands in Solomon Islands’ remote Temotu province, as well as in settlements on nearby Santa Cruz and in Solomon Islands’ capital Honiara. In linguistic literature, the language is also referred to as Reefs or Ayiwo; the speakers themselves usually refer to it as nââude ‘our language’.

Äiwoo belongs to the Reefs-Santa Cruz language group, which in turn is classified as belonging to the Temotu first-order subgroup of Oceanic. It shows a number of what appears to be archaic Oceanic or even pre-Oceanic features in its grammar; most strikingly the so-called symmetrical voice system, a system of clause organisation which is common in Western Oceanic, but which according to established reconstructions is supposed to have been lost in Proto Oceanic. The clause patterns in Äiwoo’s closest relatives, the languages of nearby Santa Cruz island, are rather different, suggesting that a closer study of Äiwoo may give important contributions to our understanding of the linguistic history of this area.

While Äiwoo is a relatively large language for the region, the incursion of Solomon Islands Pijin is leading to increasing domain loss and high rates of code-switching. Documenting traditional terms and practices will help strengthen and maintain the language in the fact of these ongoing sociolinguistic changes.

The collection includes materials from most of the main villages in the Reefs and has contributions from 73 speakers, the youngest of whom was aged 16 and the oldest 93 at the time of recording. As well as dicsussions and monologues on various aspects of Reef Islands life and culture it includes a few videos demonstrating particular procedures such as cooking and basket weaving, recordings of short ceremonies including a maturation rite for a young child and a gift-exchange ceremony as part of the procedures leading up to a marriage, and some short songs and dances.

Linguistic materials from Äiwoo can also be found in the PARADISEC archive. Most of the materials in the SAW2S002 series, collected by Stephen Wurm, is from Äiwoo, and consist mostly of transitional narratives (custom stories) recorded and transcribed mainly by a single speaker: http://www.paradisec.org.au/fieldnotes/SAW2/SAW2S002.htm. A set of recordings made by Åshild Næss in 2004-2005 are available at http://catalog.paradisec.org.au/collections/AN1. These recordings are mainly from Nenubo and Tuwo villages and include mostly custom stories.

The collection totals just over 13 hours of recordings, the majority of which is both audio and video; six recordings totalling around 25 minutes are audio-only because contributors did not wish to be video-recorded, or in one case because of problems with equipment. A total of 42 recordings totalling 6 hours 17 minutes are accompanied by EAF files with transcriptions and interlinear analysis.

The majority of the recordings concern various aspects of life in the Reef Islands, with a focus on traditional culture such as marriage customs, mat and basket weaving, childbirth, naming customs, burial customs, fishing techniques, tattooing, land rights, gardening, food preparation and preservation, etc. There is also

The data in this collection was collected in 2015 during two roundtrips to villages in the Reefs: 4-14 September (Otelo, Nyimââ, Laato, Nyiväle) and 25 September- 3 October (Tuwo, Malubu, Tängä, Malapu). All recordings were made by Åshild Næss, the principal investigator; Luke Gitakulu acted as interviewer during the first data collection trip. Between the two data collection trips and after the second trip, transcription and translation was carried out with the help of Philip Paikai, Geoffrey Vili and Patrick Gudena. Additional transcription and translation was done in 2016-2017 by Edmund Langu.

The dictionary that forms part of the collection builds on work carried out in 2004-2005 in collaboration with Patrick Bwakolo, Patrick Gudena, Brown Nupani and Geoffrey Vili and funded by the Research Council of Norway. During the ELDP-funded project in 2015, a draft prepared on the basis of this earlier work was expanded and checked with Walter Labaki, Patrick Gudena and Geoffrey Vili.

Users of any part of the collection should acknowledge Åshild Næss as the data collector and researcher. Users should also acknowledge the Endangered Languages Documentation Programme as the funder of the project. Individual speakers whose words and/or images are used should be acknowledged by name. Any other contributor who has collected, transcribed or translated the data or was involved in any other way should be acknowledged by name. All information on contributors is available in the metadata.