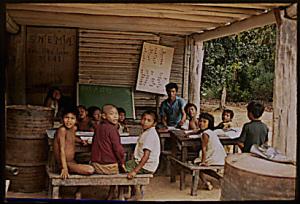 Deposit page image for the collection “Documentation of Chácobo-Pacahuara, southern Panoan languages of the northern Bolivian Amazon”. Click on image to access collection.

The project documents the Chácobo-Pacahuara languages, the only extant southern Panoan languages, spoken in the northern Bolivian Amazon in the department of Beni. Currently Chácobo and Pacahuara are considered dialects, but recent research has made this issue unclear. Estimates of the number of contemporary speakers vary between 800 and 1200. The vitality of the language is strong in remote areas, however, the interaction with surrounding regional economies has intensified resulting in a generation of children who are not learning the language in certain areas. Documentation of the language is thus urgent. The outcome of this project is around 50 hours of video and audio recordings, 10 hours of which are transcribed and translated in ELAN, and annotated in FLEX. It is the result of 3 field trips, totalling 18 months in the field. The main output is an extensive documentary corpus and a fairly comprehensive reference grammar of the language.

The ethno-history of the Chácobo people is known primarily through the work of the Argentinian anthropologists Lorena Córdoba and Diego Villar (Córdoba 2008, Córdoba & Villar 2009), based on travel records, archives of missionary documents and personal accounts of contemporary Chácobo. Chácobo is one of three extant Panoan languages present in Bolivia, the rest being in Brazil and Peru (Erikson 1992). The ‘Chácobo-Pacahuara’ TCO or Tierra Comunitaria Originaria (Original Comunitarian Land) covers 510.895 hectares. Within the TCO, the majority of the population is Chácobo, but there is also a small group of Pacahuara that are socially integrated with the Chácobo.

Approximately 200 of the Chácobo speakers now live in Riberalta, a Bolivian town to the north of their TCO. In addition to this, all of the important Chácobo economic and political institutions are located in Riberalta, such as CIRABO (Central Indígena Regional Amazônico de Bolivia), and the Chácobo and Pacahuara ILCs or Instituto de Lengua y Cultura (Institute of Language and Culture). The ILC is the educational organ of the Chácobo funded by the national government and charged with developing curriculum for indigenous based education programs, and documenting traditional Chácobo practices, whether cultural or linguistic.

The historical record indicates that there were a number of Panoan speaking groups in Bolivia denoted as the “sinabo”, “caripuna”, “chacobo” and “pacaguara”. An investigation of Panoan ethnonyms in the historical record suggests that it is unclear which group of Panoan people the contemporary Chácobo represent (Córdoba 2008, Córdoba, Valenzuela, Villar 2012, Villar, Córdoba, Combos 2009, Tallman 2012b). The linguistic situation is similarly ambiguous. In 1954 the Summer Institute of Linguistics arrived in Bolivia. The SIL missionaries Gilbert and Marian Prost initiated a stay of 25 years. In 1955 the Prost family relocated a number of Chácobo to the Ivon river where rubber tapping and almond extraction offered more integration into the regional economy. The community that was set up on the Ivon river is called Alto Ivon (Tapayá in Chácobo). It is now the political capital of the Chácobo with the highest population. Since the 1990s, many of the Chácobo have gradually been migrating to Riberalta for educational opportunities. There are now 200 speakers in Riberalta, including all of those Chácobo involved in the development of indigenous based curriculum working at the contemporary ILC. Starting in the 1990s, the indigenous people of Beni began to organize in order to maintain territorial rights over their land. It was therefore in this context that the Chacobo-Pacahuara TCO was recognized (see Herbas 2010 for more on the political context).

The Pacahuara that live amongst the contemporary Chácobo have a different history. In the 1970s, a family of Pacahuara fleeing from Brazilian head hunters were brought to live with the Chácobo by missionaries (Moreno 2010, Ortiz & Tallman 2012). In 2012 I conducted a study of 300 ‘basic’ vocabulary items sampled from the word list in Haspelmath & Tadmor (2009). I found that 93% of the vocabulary was essentially identical, but that there were noticeable phonological and phonetic differences between the languages/dialects. The children of this Pacahuara family speak Chácobo. Chácobo and Pacahuara are mutually intelligible and thus could be considered dialects. Furthermore, since studies of the Chácobo language have focused primarily on the language spoken in Alto Ivon, there is no clear understanding of whether the difference between Pacahuara and Chácobo is greater than that between the different dialects of Chácobo. There is no data on the Yateño dialect, spoken on the Yata river, for example (Córdoba, Valenzuela & Villar 2012: 29). In this project description I thus consider Pacahuara a dialect of Chácobo, on par with the dialect distinction between ‘central’ (Alto Ivon) and Yateño Chácobo, although this question awaits further investigation.

The vitality of the Chácobo language is relatively high compared to many other groups of the Amazon basin (Córdoba, Valenzuela, Villar 2012: 29). Children who grow up within the Chácobo-Pacahuara TCO learn Chácobo as their first language, and generally do not learn Spanish until approximately five years of age. The degree of fluency varies as a function of gender, age and distance from Riberalta. Women generally maintain the language better than men, a phenomenon Córdoba (2008: 148) attributes to matrilocal residence. However, over the past couple of years contact with the regional Bolivian economy has intensified. A generation of Chácobo children living in Riberalta are not learning Chácobo as a first language. Thus, the language is in danger of being lost fairly rapidly in the next decades if it follows the trend for Amazonian languages in the region. Despite the languages relative vitality, documentation is urgent.