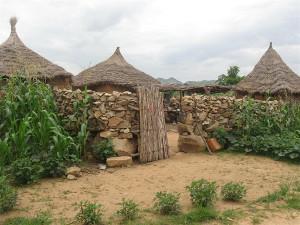 Landing page image for the collection “A usage-based grammar of Cuvok with focus on documenting the endangered social role of blacksmiths of the Tchouvok community”. Click on image to access collection.

Cuvok is a Central Chadic language spoken in the Far North Region of Cameroon. Tchouvok traditional society pivots around blacksmiths, who play a number of other key social roles: doctor, metalworker, mortician, mind-reader, and midwife. With the introduction of Islam, Christianity and modernism, the knowledge possessed by the blacksmith is no longer transmitted to the younger generation. This documentation project is integrated into my PhD research, which aims at a usage-based grammatical description of Cuvok. Much of my corpus is composed of video recordings. Ethnographic notes complement my annotated texts.

The Tchouvok society is patrilineal. Around 60% of the entire community still practices the traditional religion. Christianity is followed by about 30% and 10% of the population are Muslim. Culturally, the Tchouvok community has a great similarity with the Mofu-gudur community and lots of intermarriages do happen between the two communities.

Blacksmiths are special people in this community. Being a blacksmith in Tchouvok is a hereditary status, so it is transferred from fathers to children. They are considered holders of magical and supernatural powers. They play a key role in the development of their society in this sense that they are the ones involved in many spiritual activities. Because of their dexterity in working on metals, wood and clay, they manufacture hoes, knives, axes, pots for cooking or drinking and fetching water. They are the ones who use the clay to represent the spirits of the deceased person for the next generations to give worships to their forefathers. There is no intermarriage between a blacksmith and a nonblacksmith family. The fact that they are playing some sort of spiritual role gives them the status of supreme priest. It is evident that the maintenance of traditional Tchouvok culture (and, by consequence, of their language) is tightly linked with the fate of this social figure.

Administratively, Tchouvok is a village with 13 quarters but in terms of population, more than 6 of these quarters are populated either by Mofu (Mederey, Mozday, Gagala quarters) or by Mafa people (Mendezhe, Zemndek, Wafango and Metergwed). At the moment, there are fewer than 40 blacksmith families in the whole Tchouvok area.

During the last twelve years, I have developed great relationships with Tchouvok at all levels. I am on good terms with traditional authorities of the village or with the Tchouvok of the diasporas (some Tchouvok people are found out of their native land). People from the community are eager to participate in the documentation project and support my work as a linguist. The headmasters and the teachers who are working in Tchouvok know my research and they are ready to facilitate the teaching of the language and culture in school to preserve them from disappearing. I am happy with this collaboration which is a conducive environment for sustainable fieldwork and research. In the last years, I collaborated with the Department of Linguistics of the University of Yaoundé 1, SIL-Cameroon, and CABTAL. In collaboration with those institutions, I have given workshops to the Tchouvok community to promote the use of the alphabet and literacy in the community.

The main outcome of this project is video recordings in natural settings as much as possible of scenes where the social roles of blacksmiths are clearly stated out, transcribed and annotated using tools like ELAN, FLEX accompanied with metadata recorded using Arbil. All these materials should be archived with open access. We will have a total of 40 hours of recordings. The analysis of this body of narration, description, presentation and conversation about the various activities of blacksmiths and of recordings of day-to-day spoken Cuvok will be the source for my dissertation Ph.D. on a usage-based grammar description. As mentioned above, my thesis will not be an old-fashioned grammar, but a usage-based one informed by a lot of texts collected in natural settings. I also plan to make a contrastive analysis of the blacksmiths’ “code” as they appear in their social activities and the non-blacksmiths’ code. This analysis may reveal not only a lexical discrepancy but may indicate the difference in the perception of the world.