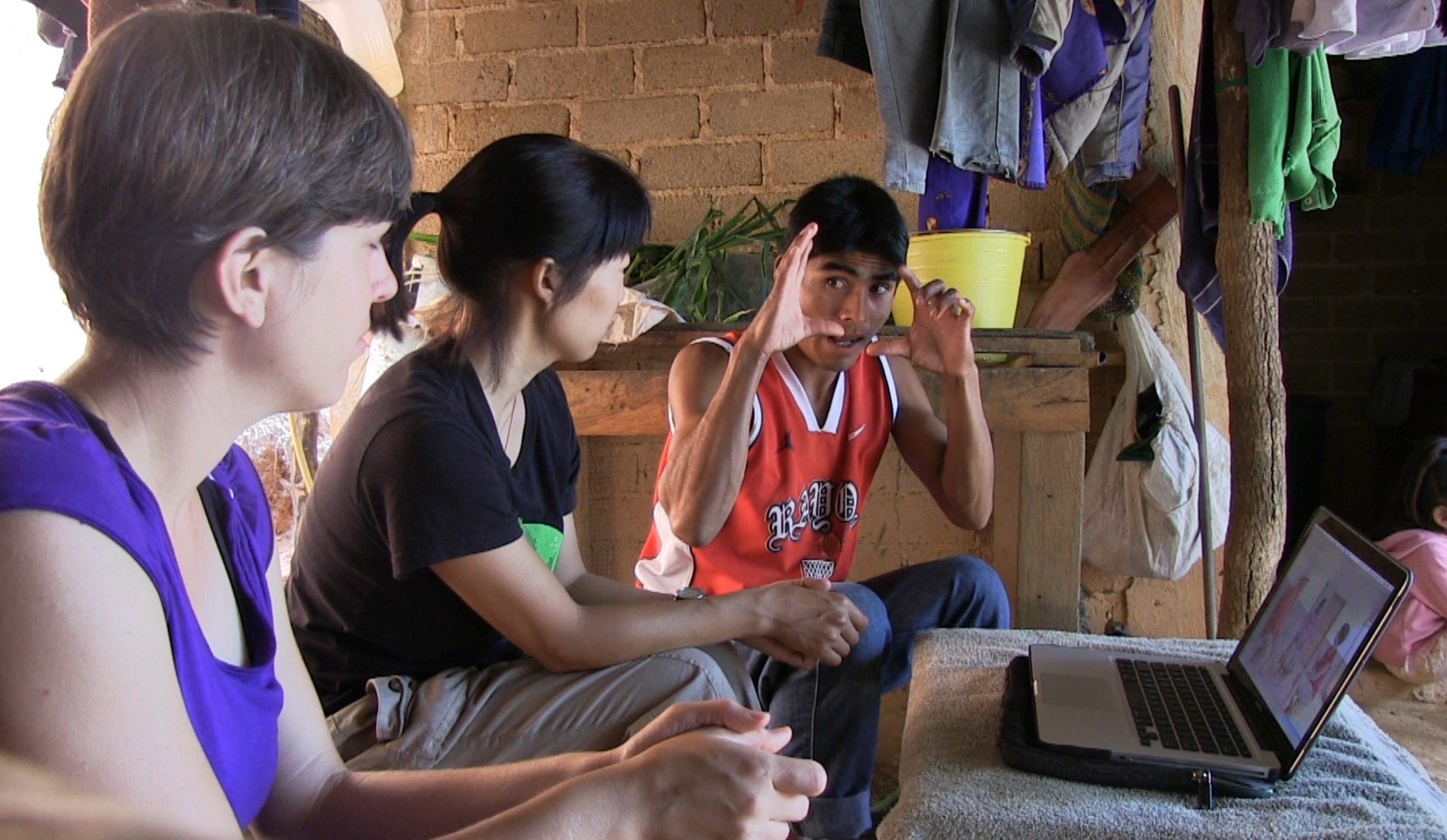 The image at the top shows Sendo, a deaf community member, signing in SJQCSL with the research team.  Sendo is seated at the right, Lynn Hou is in the center, and Kate Mesh is on the left. Click on image to access collection.

This deposit contains a record of communication in San Juan Quiahije Chatino Sign Language (or ‘making hands’ as it is described by hearing Chatino people), a constellation of family sign languages used in an indigenous Mesoamerican (Chatino) community in the San Juan Quiahije municipality in Oaxaca, Mexico.

The data were collected by Lynn Hou and Kate Mesh in July and August 2012, during an initial field trip to San Juan Quiahije. Additional data were collected by Lynn for a follow-up trip in November and December 2012. Later research projects focused on the structure and uses of SJQCSL in the signing families and on the structure and uses of gestural practices among hearing community members, typically possessing minimal knowledge of SJQCSL. These projects are represented in two separate deposits:

The image at the top shows Sendo, a deaf community member, signing SJQCSL.

The Chatino people are the traditional inhabitants of an area of contemporary Oaxaca, Mexico, stretching from the Oaxaca Valley to the Pacific Coast. The Chatinos of the San Juan Quiahije municipality are distinguished from their neighbors by using a Chatino variety that bears the municipality’s name. There are approximately 3,600 residents of the municipality, 13 of whom are known to be deaf. These community members, along with their hearing family members, are have developed a constellation of family sign languages. Researchers call this constellation of languages, San Juan Quiahije Chatino Sign Language. Hearing people in the community call both signing in the language and gesturing, ‘making hands’.

San Juan Quiahije Chatino Sign Language (SJQCSL) is a constellation of family sign languages used by deaf people and their families in an indigenous Mesoamerican (Chatino) community in the San Juan Quiahije municipality of Oaxaca, Mexico. Some of the family sign languages in this constellation are estimated to be at least 50 years old, based on the approximate age of the oldest living deaf signer. As of June 2015, the municipality has a population of approximately 3,600 people, and out of this population, 13 people are known to be deaf. The deaf community members are distributed across multiple families in co-residence, each of which has developed their own signing practices. Since many of the families’ signing practices overlap due to the sharing of conventional gestures and exchange of signs through recurring encounters of different signers, the name SJQCSL pertains to the constellation of family sign languages in the municipality.

This deposit contains video- and audio-recorded materials from the first documentary project to record the signing practices of deaf and hearing SJQCSL users. There are video-recordings of spontaneous talk as well as elicitation sessions, which provide the basis for analyses of the structures of SJQCSL varieties. There are audio-recordings of semi-structured interviews with hearing community members, providing a starting record of the community’s attitudes toward and understanding of deaf people and sign language.

Some recordings in this deposit are accompanied by annotation files that contain free translations and glosses of SJQCSL signing. Translations are in Spanish (the language shared between the researchers and some community members), and English. Glosses of SJQCSL in the deposit are written in English and printed in capital letters (e.g., TORTILLA, SCHOOL) and phrasal glosses for a single sign are hyphenated (e.g., ALL-AROUND-HERE). The glosses are not exact translations of the SJQCSL signs but rather they represent the approximate meaning of the signs or concepts associated with signs.

This deposit documents communicative practices of signers of San Juan Quiahije Chatino Sign Language. Data from this deposit were used to document the lexicon of the language, with areas of focus including:

Signs used for negation: six negative emblems that are used conventionally by gesturers in the municipality are being integrated into SJQCSL as negative signs. Footage showing the use of these signs in spontaneous interaction supports an analysis of how signers adapt the emblems as they integrate them into the language.

Signs used to identify animals, plants, and household objects were elicited using the card game, Lotería. The game features cards with a variety of images, including those of animals, plants, and household objects commonly found in the San Juan Quiahije municipality. Deaf and hearing participants’ familiarity with the card set made it possible to elicit names for the pictured items repeatedly and with a measure of control across multiple sessions of game-playing. Animals and their care were also discussed during tours of the signers’ homes and farming sites.

Family history was a frequent topic of conversation as the deaf signers and their families became acquainted with the researchers during the 2012 field trip.

Local events, including the annual San Santiago day sporting contests and community-wide celebration, were explained to the researchers. Additional footage of the sporting events is included in the deposit to contextualize the signed explanations.

This deposit records signing in a variety of contexts, including

In many of the deposit sessions, video recordings are accompanied by ELAN annotation files containing glossed signing and translations into Spanish and/or English.

The data for this deposit were collected by Lynn Hou and Kate Mesh during a trip to San Juan Quiahije in 2012. Joint work from the researchers, and all permissions provided for their past and ongoing work in the community, are archived here. Both researchers returned to the field site in later trips and continued their collaboration. Because their research foci were distinct, their later footage was placed in separate deposits.