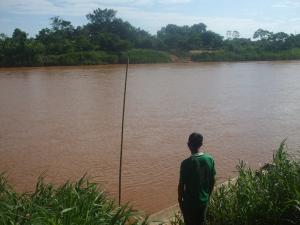 Chimane (or Tsimane’) is spoken by 3000-5000 people in lowland Bolivia. The project documents and maps speech practices across the Chimane speaking area, producing a multimedia encyclopedia of cultural and linguistic information and community-led film, and training interested community members in language documentation techniques and furnish them with equipment so they may continue the project after the end of the funding period. A doctoral thesis will comprise a sketch grammar and a detailed study of possessor prominence in the language based on documentary materials arising from the project.

Chimane is primarily spoken along the Maniquí river and in the Andean foothills in the Beni department of Bolivia. This lowland region is characterised by vast swathes of rainforest in the north and east near the border with Brazil and savanna in the south and west. The main commercial activities are cattle farming and logging, both of which have contributed to significant deforestation in the area.

There are an estimated 5000 Chimane living in approximately 115 villages situated along logging paths and rivers, principally along the river Maniquí. Settlements have an average of 24 households, connected through familial ties. Nearby is the town of San Borja with around 19000 inhabitants. Some Chimane villages are only a few hours’ walk from the town while others are days travel away by boat and foot.

Bolivia has over 30 languages, many of which are endangered. Fifteen of these languages are spoken in the Beni department. Alongside Arawakan, Pano-Tacanan and Tupian languages, there are seven isolates including Chimane (Crevels 2002).

While Chimane remains relatively viable – with several thousand speakers and continuing intergenerational transmission – comparing the situation of these other languages and of Mosetén (a closely related dialect) suggests that the vitality of Chimane is not assured. In the case of Mosetén, a range of factors have led to the decline of the language, including the introduction of Christianity and Spanish in churches and schools, clearing of the traditional hunting grounds by loggers and farmers and the employment of community members by Spanish speaking ranchers. All of these factors are also at work in Chimane communities.

As part of the documentation project, the community specifically requested the expansion of the multimedia encyclopedia and the creation of a film documenting their way of life.

Chimane is spoken across a diffuse area around the town of San Borja. The villages number an estimated 115 and speaker numbers have been estimated between 3000-5000.

There is some extant descriptive work on the language. Wayne Gill produced a 300-page Chimane-English dictionary and a ‘teach-yourself’ guide to the language, though his use of non-linguistic terminology means that many aspects of Chimane grammar remain inadequately described. Eusebia H. Martín also produced a series of articles (1987-1994) which provide some basic information on the language. Jeanette Sakel has written extensively on Mosetén, including a descriptive grammar of the language (2004). Studying isolates such as Chimane can increase our understanding of language typology as these languages tend to display unusual features not found in other languages. While Chimane displays many features typical of South American languages, it also has some others which are unusual for the macro-area, for example an elaborate grammatical gender system which extends to many parts of speech including modals and place adverbs.

This collection represents the first documentation of a Mosetenan language, and complements materials such as Sakel’s work on Mosetén, Gill’s dictionary and teach-yourself guide to Chimane and the depositor’s own work on valency in Chimane.

As well as producing an archived collection, the depositors also produced an online map of dialectal variation on http://languagelandscape.org/, a multimedia cultural and linguistic encyclopedia. For examples of recordings, see here

Jacinto sings an ode to his hometownhttp://languagelandscape.org/recordings/emonico-monico

A collection of audio and video recordings which constitute an initial documentation of Chimane. The collection includes recordings of narratives, personal histories, songs, nursery rhymes and jokes. It also includes elicitation materials and experimental materials including retellings/descriptions of the Pear story, the Frog story, the Circle of Dirt and the MPI Staged Events clips.
In total, the collection contains

Before the start of the ELDP project, the depositor spent seven months initiating the documentation project in two Chimane villages.
The core of the materials was collected during the fieldwork period of the depositor’s PhD research from 2014 to 2015.