Documentation of Chini language and culture 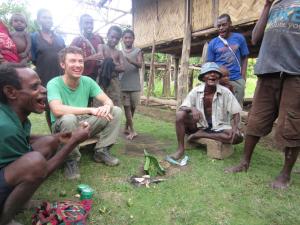 Landing page image for the collection “Documentation and analysis of Andamang Chini”. Click on image to access collection.

This collection contains documentary materials about the Chini people in Andamang and Akrukay villages on the lower Sogeram River in inland Madang, PNG. It is geared toward naturalistic interactive contexts representative of local life, culture, and language use. Most materials are in Chini [afi], some in Tok Pisin, some in other Papuan languages. Materials collected in 2012 and 2014 are mostly audio; materials deposited as of 2016 are mostly audiovisual.

Chini has two dialects, one for each of the two villages. The villages are broken up into a number of smaller hamlets. The number and location of hamlets are in constant flux, and linguistic practices vary from hamlet to hamlet. As of 2019 there about 20 active users of the Andamang dialect and about twice that for Akrukay. Active users of the language are in their late 30s+, and the language has been undergoing shift to Tok Pisin. There are about 350 total people across the two villages.

Chini is a member of the Ramu family, a group of languages spoken along the Ramu River and adjacent areas.

The different interactive contexts documented here are valuable for understanding language use and code-switching at a time when the vernacular has been undergoing shift. The documentation represents the range of practices characteristic of Chini people’s speech at the time of my fieldwork, from Chini-dominant to Tok Pisin-dominant.

Several recordings attest to cultural practices about which little is known outside Melanesia, some of which have been in decline, for example: food restrictions, the culture of the men’s house, matrilineal land tenure and clan assignment, female adoption practices between the Chini and other nearby matrilineal groups, menarcheal seclusion, among others. This collection also sheds light on the history of ritual dance (Tok Pisin ‘singsing’) exchange in the Sogeram/Middle Ramu region.

This collection includes around 60 hours of recordings of the cultural and linguistic life found in Chini society from 2012-2019. Just over 30 of these hours involve the use of Chini-dominant speech, of which about 12 hours of multi-participant discourse and about 3 hours of single-participant discourse have been transcribed and translated into Tok Pisin.

The 30 hours of Chini-dominant speech include both dialects and dialect mixing. The Andamang dialect figures more prominently in the documentation than the Akrukay dialect. These data include many hours of interactive conversation, e.g. in family settings over the morning or evening meal, as well as endangered cultural practices, trips through Chini country, folk tales, oral history, and autobiographical texts, among others.

About 15 hours are of Tok Pisin-dominant interactions. These recordings shed light on the dynamic between the vernacular and the language of shift across a wide range of interactional and institutional settings in Chini society. Included are, for instance, a Catholic mass and sermon and a staff meeting for the first graduation of Andamang elementary school.

About 10 hours are roughly 50/50 in terms of the code(s) of use (i.e. Chini versus Tok Pisin). These data are rich in code-switched speech and provide a window into the youth-driven nature of shift in Andamang and Akrukay. Most of these data are from trans-generational interactions in family settings.

About 3 hours are of events with minimal actual speech, for example a father and son constructing a wall for their kitchen house, and a soccer game. In addition there are just under 2,5 hours of performances of ritual exchange dances (‘singsings’).

About 1,5 hours involve significant use of other languages, including a Chini-Rao-Tok Pisin interaction as well as a number of requests from nearby communities for someone to come document their languages.

There are other types of recordings and materials including: recordings of transcription sessions, text-based elicitation sessions, word lists, permissions, photographs, and copies of field notebooks. Some of these are still being processed and uploaded to the collection.

This collection includes deposits from an ELDP small grant awarded to the depositor in 2014 and an ELDP IGS grant awarded for 2016-2018. The IGS project is part of the depositor’s PhD research based at the University of California, Santa Barbara.

Annotation files will become available for registered users once they are in a presentable state. Many annotations for recordings in 2014 are in analog format and in the process of being digitized. Much of the digitization of those annotations is thanks to the work of Shannon Li during her time as an undergraduate student and research assistant at the depositor’s home university, UCSB. In-situ transcription was done by the depositor primarily with the help of Anton (Mbarɨŋɨnɨ) Mana. I am very thankful to these and so many others who have helped build and enrich the documentation.

Acknowledgment and citation of data

Anyone wishing to use or cite the contents of this collection for research purposes or otherwise is requested to ask the principle investigator prior to doing so. I am best reached at brooks.josephd AT gmail

The use of linguistic examples or other specific content from recordings in this collection in published materials should be cited and resolvable to the original location in the collection. Recorded connected speech data cited from this corpus should cite the full name or initials of the original person(s) who produced the utterance. This can be done by citing the basic filename associated with the deposited recording and a time stamp that indicates where it can be found. So, the utterance gwrwaŋɨ, dmu ŋgarugruru! ‘Go on (follow him), (otherwise) a sorcerer could kill him!’ could be cited as: ‘Emma Airɨmarɨ: afi011116iv_21:37’.