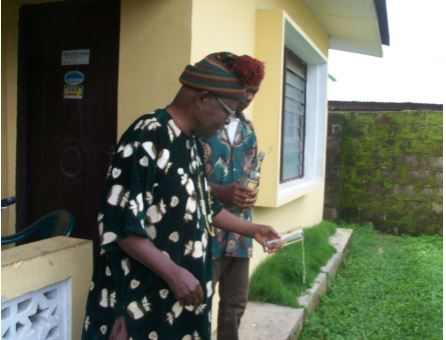 The project sets out to document the language of libation rituals in Kiong, a language with less than 100 speakers in Akamkpa and Odukpani local government areas of Cross River State, Nigeria. The project focuses on the Okoyong community in Odukpani where libation ritual is still practiced as a significant form of sacred communication that is quitessential to their culture and spirituality but which is daily put out of prominence and active use. The project aims to interview, record, transcribe and annotate audio and video materials to produce archival data that will benefit the Kiong community and the enlarged scientific community.

Okoyong community in Odukpani, Cross River State, Nigeria. The choice of Okoyong is because the practice of libation ritual is still practiced as a significant form of sacred communication that is quintessential to their culture and spirituality.

The Kiong pride themselves in their rich cultural heritage in the form of music, folklore, craft and verbal performances, such as sacred communication, burial oration, naming and libation rituals. Some of these legacies are still active while others are no longer transmitted to the coming generation. Libation ritual is one of the verbal aspects of Kiong culture and spirituality that is losing its traditional significance. Many aspects of the Kiong traditional life run the risk of disappearing since there are no records, and given that the younger generation of Kiong do not hold the knowledge. For instance, Christianity eclipsed their indigenous religion, ‘Efik-ization’ of their personal names in the course of internal colonization by the Efik. The language and culture of Kiong therefore require serious intervention by way of documentation, while a few speakers still live. Every socio-economic, religious, political and domestic activity in this community is done in Efik. It is urgent to document this language as in the next three decades; there is a risk of no speakers of Kiong remaining.

Dr Eyo Mensah’s involvement with the Kiong language and people dates back to 2002 when he participated in a language maintenance workshop organised by the community and in which Prof. Okon Essien was a key resource person in Okoyong, Odukpani. Dr Mensah was also part of the committee set up by the community to design orthography for Kiong. This deposit is built on this connection and the community’s desire to have their language and way of life documented.

The community members were offered training in the processes and methodology of language documentation (recording, filming, annotation and transcribing) to enable them to serve in the future as stewards of their language.

The village head and chiefs of the community were involved in the planning and execution of the project, as well as being part of the project advisory and steering group, sharing leadership roles and providing input on sensitive issues regarding data collection.

Materials involving the spiritual significance of the libations ritual were aided by the expertise of Prof. Essien Offiong, an expert in African traditional religion in the University of Calabar and Mrs. Ekawan Sylva, a MA student and Kiong community member.

Users of any part of the collection should acknowledge Eyo Mensah as the researcher. Users should also acknowledge the Endangered Languages Documentation Programme as the funder of the project. Individual speakers whose words and/or images are used should be acknowledged by name. Any other contributor who has collected, transcribed or translated the data or was involved in any other way should be acknowledged by name. All information on contributors is available in the metadata.