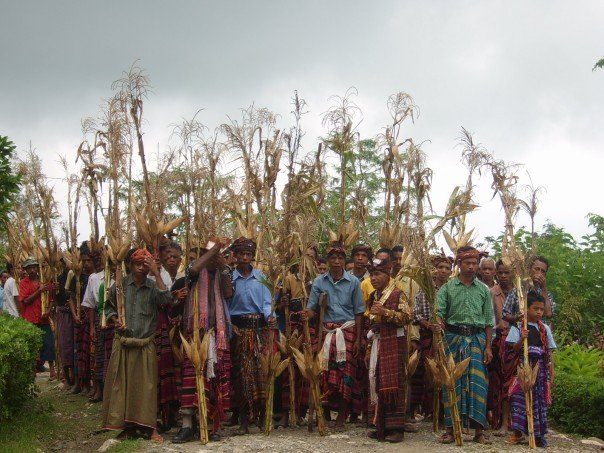 Landing page image for the collection “Zapal, an oral literature genre of the Bunaq Lamaknen”. Click on image to access collection.

This collection provides in-depth documentation of zapal, an endangered form of oral literature of the Bunaq of Lamaknen. The collection comprises over 100 zapal tellings. The zapal that are brought together here represent materials collected between 1966 and 2013 by the anthropologist Louis Berthe, the Bunaq leader A.A. Bere Tallo and most recently, myself, Antoinette Schapper. The archived zapal are in print and/or audio form, depending on when they were collected.

Bunaq is a Papuan language belonging to the Timor-Alor-Pantar (TAP) family. This affiliation is reflected in the Bunaq forms of their bound morphemes, their pronouns, and a portion of their vocabulary. Bunaq appears to form a primary branch of its own within the family. The language is spoken in isolation from other members of the family, being surrounded on all sides by Austronesian languages: Tetun to the south and west, Kemak to the north, and Mambae to the east. Like other TAP languages, Bunaq has SOV word order, and this sets it apart from the neighbouring Austronesian languages. However, Bunaq speakers have borrowed and adapted significant amounts of Austronesian lexicon and grammatical constructions. As a result, the Bunaq language possesses a remarkable hybridity; it is a language in which Papuan features run deep, but one whose lexicon and constructions are overlayed by long and intense engagement with Austronesian language and culture.

The Bunaq people straddle the border between independent Timor-Leste and Indonesian West Timor. In the colonial period when Timor was occupied by the Dutch and Portuguese, Bunaq people utilised this position to move back and forth across the border. Many modern-day Bunaq villages were the result of historical movements across the border.

There are roughly 80,000 native speakers of the Bunaq language in total. Of these, approximately 30,000 are located in Belu province of West Timor. The greatest concentration in West Timor are in Lamaknen and neighbouring villages of southern Raihat with around 25,000 speakers. The remaining 5,000 speakers are found in scattered villages in southern Belu.

The group documented in this collection are the Bunaq of Lamaknen.

Zapal as a genre of oral literature

Zapal (also pronounced sapal or zupal depending on the individual) is a type of oral literature of the Bunaq people of Lamaknen. Traditionally, elders would tell zapal to children in the evening before going to sleep. There is an old prohibition on telling zapal during the day. Elders would tell children that if they were told zapal during today, their bodies were become riddled with worms. A.A. Bere Tallo (see below) writes that this was, however, just a strategy used by elders to stop children requesting stories during the day when there was work to be done. With the arrival of electricity, television and mobile phones in Bunaq villages, the traditional night-time forum for telling zapal has been lost to a certain extent. As a result, Bunaq children now know have a greatly reduced knowledge of the tales from the vast canon of zapal that the Bunaq once had.

In contrast to bei gua ‘ancestor histories’ that are told in ritual parallelism, zapal for the most part use the Bunaq language of everyday communication that is easily understood. This relates to the social-cultural functions of zapal; they are not merely a form of entertainment, but also constitute instructive lessons for children. Common didactic themes issuing from zapal include the need to obey one’s parents and follow the ways of the ancestors, that kindness begets prosperity whereas cruelty only leads to ruin, and the necessity of courage, resilience and patience in life. At the same time, zapal encapsulate and elucidate aspects of the Bunaq world view and their environment, for instance, explaining how fire was discovered or how the cockatoo got its white feathers. Like fables in the western world, zapal frequently feature animals, trees, or forces of nature such as rain that are anthropomorphized. Several human characters, such as the brothers, Asa Paran and Mau Paran, who appear in zapal are also ancestor figures for the Bunaq and thus also appear in the bei gua.

Many of the Bunaq’s zapal are not unique to them. For instance, the story of the Monkey and the Mouse and that of Suri Guloq, both of which are archived in several versions in this collection, are found among the Tetun. Other stories appear to be very widespread over the area of Nusa Tenggara Timur Province. Most notably, the Bunaq stories of the Helmeted Friarbird are part of a set of myths that extend from Flores to Sumba through to Timor. Interestingly, whilst the other Helmeted Friarbird stories are found amongst Austronesian groups, Bunaq is the only Papuan ethno-linguistic group which has these stories. This seems to confirm the linguistic and ethnographic picture, namely, that that the Bunaq are a highly hybridised group of people that have assimilated large tracts of language and culture through extensive interaction with Austronesians. Indeed, such incorporation seems to be ongoing with new zapal from other cultural sources being recently recorded. For instance, trickster stories of Abu Nawas/Abu Nabas seem to have recently adopted as zapal from Muslim sources in Indonesia, while a version of Cindarella (with a Bunaq twist) was also recorded as a zapal.

The collection comprises 44 bundles of zapal in the Lamaknen dialect of Bunaq. The collection is divided into three parts in terms of the form in which the zapal are documented. Note, however, that these parts are not reflected in the archive structure in any way.

The first part takes in the zapal that were collected between 2006 and 2013. For these zapal, each of the 43 bundles contains a .wav format audio recording of the zapal in Bunaq. Other languages sporadically included in the material are Indonesian and Tetun. These are for the most part narrative monologues told by a single person, but others can be frequently heard in the background, sometimes prompting the speaker or repeating notable events from the story. Of these, 35 bundles have ELAN files with Bunaq transcription and translations into Indonesian and English, while 1 bundle has an ELAN file with Bunaq transcription and English translation. For the remaining zapal, the audio recording is accompanied by a pdf file containing a transcription. The total length of the audio files is 333 minutes.

The second part of this archival collection comprises the 61 bundles of the zapal collected in 1966 by Louis Berthe, an anthropologist that worked with the Bunaq in Lamaknen in the 1950s and 1960s. The zapal collection of Berthe represents an important contribution to the documentation of this genre of oral literature, since many of the zapal he recorded appear no longer to be told amongst the Bunaq today. After Berthe’s death in 1968, Dr. Claudine Friedberg deposited the original reel-to-reel recordings with the Collège de France. Tragically, however, most of these reels were lost. A small number of recordings survived, but they contain mostly music and only a few of the zapal he collected. The surviving recordings can be heard accessed through the Centre de Recherche en Ethnomusicologie (CREM) online archive here: https://archives.crem-cnrs.fr/archives/collections/CNRSMH_I_1970_068/. Dr Friedberg had retained the typed transcriptions by Berthe in her own personal archive and gave permission to have these archived with ELAR. These are archived as pdfs and can be discovered by searching Berthe in the archive. Metadata for the Berthe collection includes reference to the number of the original band and position of the story on the band for reference in case the reels are found. In the three cases where the original recording is still extent, a link to this in the CREM archive is made with the bundle.

The third part of the archive are written collections of zapal. Most significant is the collection of zapal (or sapal as he calls them) written down in the 1970s by A.A. Bere Tallo, the first governor of Belu (where Bunaq is spoken) and the previous loro (‘ritual leader’) of the Bunaq area of Lamaknen. The manuscript contains 21 zapal. These are presented in two columns with Bunaq on the right and an Indonesian translation on the left. Bere Tallo also provides an introduction and copious notes to the texts. The manuscript was held by Dr. Anton Bele and a pdf of a photocopy is archived here with his permission. The second item in this part of the archive is a published (but long out of print) book entitled Comment fut tranchée la liane céleste: et autres textes de littérature orale bunaq (Timor, Indonésie) (Friedberg 1978) of 10 zapal from the Berthe collection. Assembled and annotated by Dr. Claudine Friedberg, this collection is presented with translations, glosses and ethnographic notes in French. The pdf of this book is archived here with the permission of Dr. Friedberg. Finally, two volumes of zapal were produced as part of this grant using a selection of the materials archived here. Each volume presents zapal texts in both the original (edited) Bunaq and in a standard Indonesian translation. A detailed introduction in Indonesian discusses the cultural purpose of zapal, presents the Bunaq orthography used in the volumes including the salient differences between it and Indonesian orthography, and suggests how teachers might use the books in class. Copies of both volumes in hard copy were distributed to schools throughout Lamaknen.

All recordings, transcriptions and written materials are available to ELAR users without restrictions.

This collection was assembled by Antoinette Schapper.

All the materials are openly accessible, without any kind of restrictions, in the online catalogue of the Endangered Languages Archive, ELAR.