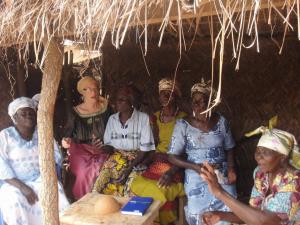 The project documents endangered cultural and linguistic practices in two cult languages still used in the Nawuri-speaking Balai community. The Kiliji language is used almost exclusively by women, in the context of a cult know popularly as Okule and more accurately as Ojo Aliji. It is identifiable as a variety of Yoruba. The other is an archaic variety of the Nawuri language used by the indigenous founder clan of Balai, also known as Balai, exclusively in prayers. This clan is known for iron working and still practices it, using traditional methods. The Ojo Aliji cult is highly endangered in the medium run, since no new members are being recruited. The Balai clan language is a relic of the language as spoken before the arrival of incomers. Although they still practice iron working the methods are changing. Information was also collected on pottery making as it was formerly (but is no longer) practiced by Balai women.

Nawuri is a North Guang language, in the Guang branch of the Tano (or Akanic) group. The project was carried out in Balai in the Kpandai district at the north-western end of the Nawuri-speaking area. However, although Nawuri is the vehicle for most of the information collected, a major focus is Kiliji, a Yoruboid language used in the Ojo Aliji cult practiced by women of the village. It is apparently most similar to the Ife language of Togo and Benin. Although the cult is practiced by a number of groups of the area, neither the cult nor the cult language have been previously documented.

The Ojo Aliji cult and its Kiliji language have not been previously documented or noted in any detail.

The Kiliji language is documented with a short lexicon that identifies Yoruba sources, recordings, transcriptions and translations of songs and libation texts in Kiliji, and photos and videos of ritual performances. The special register of Nawuri is documented with recordings of interviews with Balai clan members, recordings and transcriptions of libations with photos and video of a performance. There are also photos, video and discussion of the traditional craft of iron working, and photos and and interview on pottery which is no longer practiced.