Documenting Language and Interaction in Kula 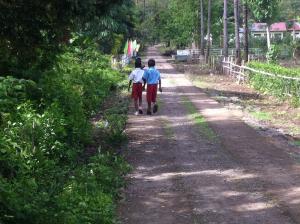 Landing page image for the collection “Documenting Language and Interaction in Kula”. Click on image to access collection.

This collection includes a variety of audio, video, and written materials in Kula, a Papuan language spoken by approximately 5,000 people in the eastern highlands of Alor, Indonesia.

Materials in this collection include audio recordings of traditional narratives and personal experiences originally recorded by famed Alorese linguist Anderias Malaikosa, a native speaker of Sawila, in 2010 prior to the ELDP project. It also includes video recordings of everyday conversation, storytelling, and stimuli-based elicitation tasks made by Nicholas Williams, Penipius Mosali, and Anton Lapuimolana between 2012 and 2014, with support of an ELDP grant. These materials were collected as part of an effort to document everyday use of Kula before language shift progresses further in the community.

This collection contains materials collected primarily in and around Lantoka, a Kula-speaking village in the highlands of eastern Alor. Kula is spoken by about 5,000 people in eastern Alor both in highland villages and along the northern and southern coasts. A limited number of recordings were made in other villages. The language has also been referred to as Tanglapui and is closely related to two other languages of eastern Alor, Sawila and Wersing. Some dialectal variation exists but is not well documented or understood. Kula belongs to the Timor-Alor-Pantar language family. Wider affiliations remain unclear.

Kula was traditionally spoken only in the highest regions of eastern Alor, on and around mount Koya-Koya, near the village Desa Tanglapui, referred to locally as Lantoka. Some time around Indonesian independence, many Kula were moved to more permanent villages at lower elevations including the northeast coast of Alor. Many Kula now maintain residences in the district capital, Kalabahi, with frequent travel between Kalabahi and eastern Alor. Children both in Kalabahi and the villages of eastern Alor exhibit limited fluency in Kula and frequent use of Alor Malay, spoken at home and in public, and standard Indonesian, which is taught in school, used in church, and heard on television and elsewhere. Lantoka and the surrounding area is undergoing slow but steady development, including construction of new schools, roads, and homes. District government is encouraging the people to establish more wet rice fields and other crops to support further development.

This collection includes a large amount of informal conversation, recorded opportunistically by the principal researcher (Nicholas Williams) during an extended stay in Lantoka from 2012-2014 and by Lantoka residents Penipius Mosali and Anton Lapuimolana.

The materials in this collection were collected between 2010 and 2014 with support from a Fulbright fellowship, an ELDP Individual Graduate Scholarship, and a Doctoral Dissertation Improvement Grant from the US National Science Foundation.

Users of any part of this collection should acknowledge Nicholas Williams and Penipius Mosali as the data collectors and principal researchers. Users should also acknowledge the Fulbright Program, the Endangered Languages Documentation Program, and the US National Science Foundation as funders of the research. Individual speakers whose words and/or image are used should be acknowledged by name. This information is available in the metadata.