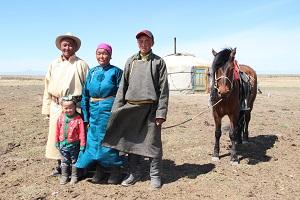 Deposit page image for the collection “Documenting the Durvud dialect of Oirat in Western Mongolia”. Click on image to access collection.

The Durvud dialect of Oirat, a variety spoken in vast but sparsely populated regions in western Mongolia such as Uvs, Khovd, and Bayan-Olgii. Due to the increasing dominance of Khalkha, Durvud and other varieties of Oirat are disappearing rapidly, and only a small minority among the 66706 ethnic Durvuds still speak the language. The documentation effort focuses on the language as occurring in a number of different culturally important situation types of nomadic life and thus capture those parts of Durvud language culture that are disappearing most rapidly.