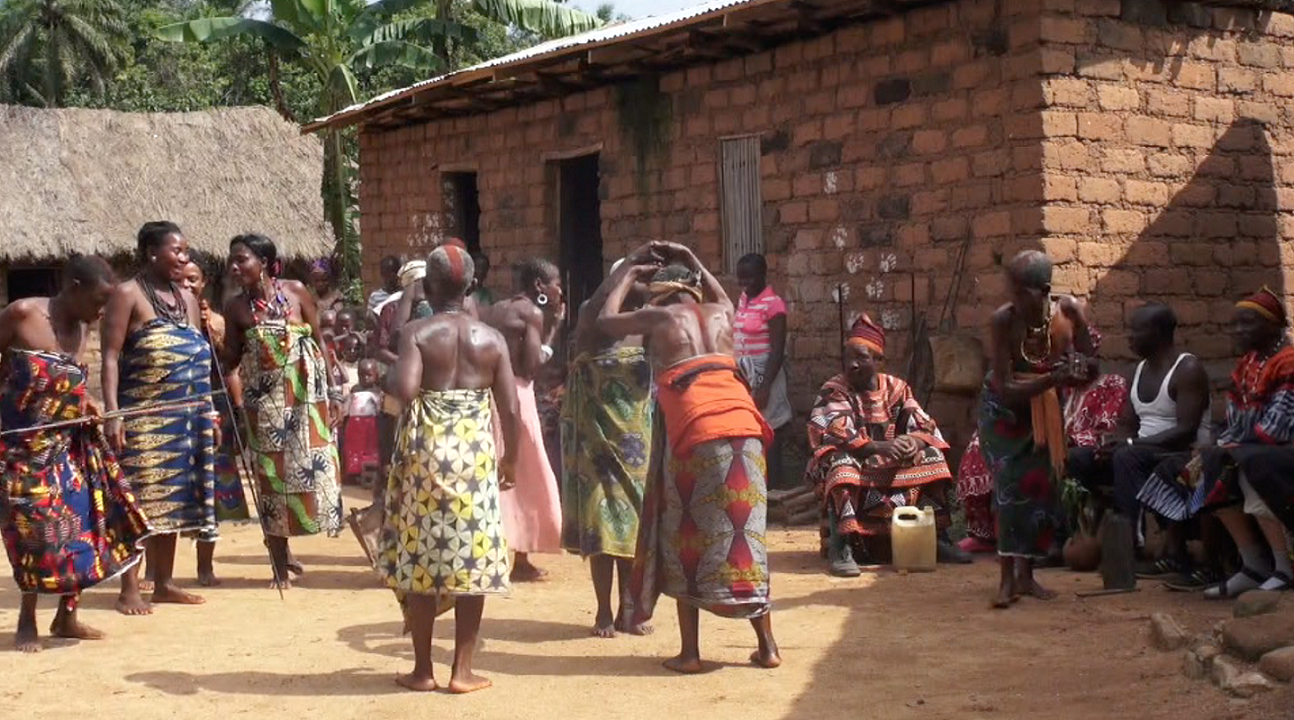 Dance of the Ngun Ishaama women’s secret society in honour of the village chief and the guest. Recorded on 21 June 2012 on the Ngun palace square by Adoh Vitalis Emmang. Landing page image for the collection ‘Verbal art, ethnohistorical performances and welcome rituals from Ngun and Ajumbu’. Click on image to access collection.

This collection includes materials from two different languages spoken in Lower Fungom, a rural, semi-forested small area of northwest Cameroon: the Ngun variety of Mungbam and Ajumbu. The original project was entitled “Linguistic and ethnographic documentation aimed at identifying loci of cultural and linguistic reproduction in two communities speaking endangered Bantoid languages”. This reveals that the main goal of this collection is not only to provide material about two endangered languages but, rather, to advance our understanding of the socio-cultural and linguistic mechanisms that made it possible for them to be still spoken. From this perspective, it can be said that this collection aims to push the boundaries of language documentation to include anthropological issues. This has determined that most of the events being documented were selected on the basis of their relevance for the reproduction of the traditional culture and language.

Lower Fungom is an extremely interesting area for the documentation of endangered languages: located in the Cameroonian Grassfields’, Lower Fungom is an area around 240 square kilometers in size–i.e. about the size of the Mediterranean island of Elba–where no less than seven distinct languages, or small language clusters, are spoken in its thirteen recognized villages. Four of these languages are restricted to a single village (i.e. Ajumbu, Fang, Koshin, and Kung). The resulting language density totals about one language per thirty square kilometers, making Lower Fungom one of the linguistically most diverse micro-areas of the Cameroonian Grassfields–itself a well known area for its remarkable degree of linguistic diversity–if not of the entire world. The average speaker population does not exceed 2,000 individuals, thus making all of the languages of Lower Fungom potentially highly endangered. From this perspective, it can be said that this is the first ELDP documentary project in an area that would deserve more work in the future.

All the Lower Fungom societies (as well as most of the societies found along the Nigeria-Cameroon borderland) are characterized by a hyper-localist language ideology: from the locals’ perspective, that is, each village speaks its own language. This parallels with some socio-political features such as (i) each village is headed by a chief who administers both political and spiritual matters in collaboration with members of village-specific secret societies; (ii) all of the villages were traditionally independent polities and still retain much of their independence. It is this complex, multidisciplinary perspective that has led to the selection of Ngun and Ajumbu.

Ngun is today one of the smallest villages of Lower Fungom (about 150 inhabitants) but has been one of the most powerful chiefdoms of the area until the end of the 19th century. In 2010 I had the opportunity to record the most important Ngun festival–called Bikang–which must be considered the paramount institution for the reproduction of Ngun both as a village-chiefdom and as a language (in fact, a local variety of Mungbam). This constituted a privileged starting point for a documentary project.

As for Ajumbu, it is relatively small too (about 250 inhabitants) but linguistically and historically very different from Ngun. Ajumbu is a one-village language, quite distinct from all the other languages spoken in the area, and available evidence seems to point to a relatively recent formation of Ajumbu as a chiefdom: it is highly likely that its kin groups formed independent social units until quite recently.

Ngun and Ajumbu were thus selected because they exemplify two extremes along a “centralized-fragmented” socio-political continuum, a dimension that is certainly central for the understanding of the maintenance of the languages of Lower Fungom and beyond.

The collection created within this project focuses on speakers of the Ngun variety of Mungbam [mij] and of Ajumbu [muc]. All of the documentary work was done in situ, i.e. all recordings were made in natural contexts.

Both Ajumbu and Ngun-Mungbam have no writing system, are not included in local school education, and are highly endangered due to their limited speaker populations (below 300 individuals each) and to the emigration of many of them to other parts of Cameroon and Nigeria. The diffusion of Cameroonian Pidgin English since the 1960’s is also changing linguistic behaviors, mainly but not only at the level of composition of individual multilingual repertoires. Multilingualism represents an important part of the daily life of Ngun and Ajumbu speakers (and in most sub-Saharan Africa as a whole) and, while it has not become a specific focus of this project, this deposit has provided invaluable material for further studies of African small-scale multilingualism (see publications in the KPAAM-CAM project website, which owes a lot to this deposit).

Ngun is a variety of Mungbam [ISO639-3:mij]. It is closest to the Abar variety, although some key differences exist. Ajumbu [ISO639-3:muc] is a one-village language of difficult affiliation within the Bantoid (non-Bantu) family.Both belong to the Yemne-Kimbi sub-group within the Bantoid (non-Bantu) family. Other languages included in the material are: Cameroonian Pidgin English, English, Zhoa [zhw], Kung [kfl], Abar and Munken (other varieties of Mungbam).

The collection has the following characteristics:

(i) significant ethnographic component. This has materialized, for instance, in the inclusion of events that would have normally been excluded in more traditional, “ancestral-code” documentary works. To make but one example: a good number of bundles focus on the welcome rituals the local communities have dedicated to the documenter (a white European). In absence of other rituals that could be documented during the documenter’s presence in the villages, these were the best possible events that could not only allow the documentation of language-in-practice and verbal art, but also of cultural practices that could reveal important sociocultural features that could advance our understanding of the maintenance dynamics of these languages.

(ii) Concern for multiple viewpoints in videos. A number of the bundles include videos taken with two different cameras. Some ELAN files are linked to two files: this allows to have both perspectives represented on screen and to follow annotations within this twofold perspective.

(iii) Incompleteness. Despite the documenter’s efforts, the collection suffers from two main lacunae. The first one is that the Ngun community, after collaborating for weeks on the annotation of the recordings, suddenly decided that the culturally and linguistically most salient event–the Bikang ritual–had to remain secret and, hence, not made publicly accessible. The second is that, due to the illness of the chief of Ajumbu (who died a few weeks after the project ended), the Ajumbu people could not perform the festival that had been initially targeted as the main focus for documentation: as a consequence, the documentation of Ajumbu is only fragmentary at this stage.

The target languages have the following characteristics.

The collection comprises 101 bundles in total, 25 of which comprise Ajumbu material, the remaining are from Ngun. The total length of the videos is about 34 hours, about 24 of which are universally accessible (see above for restrictions requested by the Ngun community).

These are the main topics/events arranged by target language.

Most of the materials are openly accessible, without any kind of restrictions, in the online catalogue of the Endangered Languages Archive, ELAR. Only the recordings of the Bikang festival are not publicly available due to an explicit request on the part of the Ngun community.

Users of any part of the collection should acknowledge Pierpaolo Di Carlo as the principal investigator, the data collector and the researcher. Users should also acknowledge the Endangered Languages Documentation Programme (ELDP) as the funder of the project. Individual speakers whose words and/or images are used should be acknowledged by respective name(s). Any other contributor who has collected, transcribed or translated the data or was involved in any other way should be acknowledged by name. All information on contributors is available in the metadata.