Documentation of Enets: digitization and analysis of legacy field materials and fieldwork with last speakers 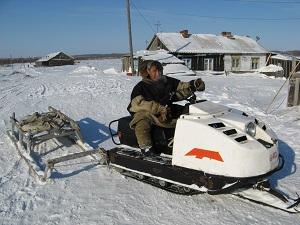 Landing page image for the collection “Documentation of Enets: digitization and analysis of legacy field materials and fieldwork with last speakers”. Click on image to access collection.

The project includes documentation of Enets, an almost extinct Northern Samoyedic language spoken on the Taimyr Peninsula, Siberia. The collection includes digitized legacy materials (manuscripts and tapes) of Soviet researchers of the 1930s-1990s and their analysis in the field, as well as documentation material based on fieldwork with the last speakers, documenting the phonology and morphology of modern Enets.

By documenting Enets at two temporal stages, the researchers hope that they will be able to track the structural changes attested in the language of the last speakers.

Enets is an almost extinct Northern Samoyedic language spoken on the Taimyr Peninsula, Western Siberia. There are hardly any fully competent speakers of Enets, which is no longer used on an everyday basis. However, about 30 people, all over 45 years old, retain substantial competence and can understand previous Enets recordings without difficulty. The Enets of these present-day speakers is somewhat different from the language of their parents and grandparents reported in earlier sources, with differences at all levels of language structure.

Enets was never officially written, and the Enets were not even always recognized as a separate ethnic group, partly due to the small size of the community. Until a few years ago, there were only a couple of pages of Enets texts published in a way accessible to the language community at least in principle.

By itself, Enets is especially interesting, among other things, for its

Enets is of a special interest for contact linguistics. Being a fairly small nation (even in the 16th century the Enets numbered only about 500), Enets traditionally neighboured and extensively intercommunicated with much bigger peoples, mostly with the very closely related Tundra Nenets and Nganasan (Northern Samoyedic), who substantially influenced Enets material culture, and presumably the Enets language. However, the actual language change due to this contact was never studied in detail and may hide many surprises. Less closely related Selkup (Southern Samoyedic), Ket (Yeniseic), and more recently Evenki (Tungusic) and Dolgan (Turkic) might have also left their trace in the language of this small community.
Modern Enets also represents a real challenge for linguistic documentation due to its immense inter-speaker variation and absence of any norm. Coupled with the linguistic decay, this means that language change attested in Enets of the current generation of speakers represents a range of individual changes not necessarily observed by all speakers.

The collection aims to include as many legacy records of Enets as possible, both published and unpublished, and make them available digitally with transcriptions, translations and annotations. In addition, the collection includes materials on present-day Enets as well as community-oriented language materials.
When complete, the collection will provide a rich data set consisting of digitized and analysed Enets records from previous research and an audio-video corpus of modern Enets. In particular, the collection will include

The research team conducted a pilot fieldtrip in autumn 2005. The core of the newly recorded materials were collected between 2008 and 2011by Andrey Shluinsky and Olesya Khanina during the fieldwork for the ELDP Major Documentation Project held by Bernard Comrie.
The collection also includes legacy materials.

The materials will also be archived at Moscow State University, in the local Centre of Folk Culture in Dudinka, and at the MPI-EVA archive. The materials from the related DoBeS research project have been archived at The Language Archive and are accessible under https://hdl.handle.net/1839/00-0000-0000-0008-2194-0.