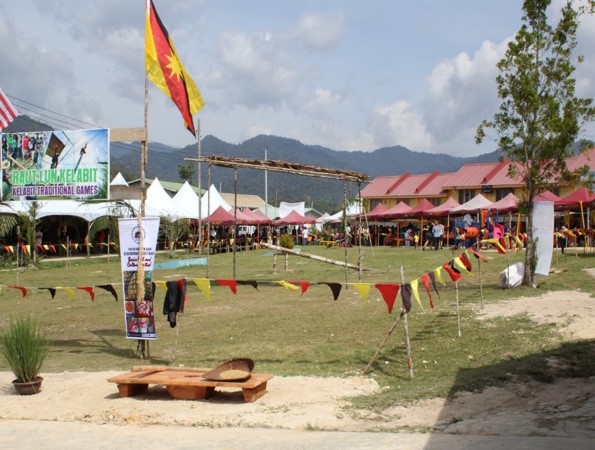 Deposit page image for the collection “Documentation of the Kelabit language, Sarawak, Malaysia”. Click on image to access collection.

The Kelabit language is spoken by approximately 6,000 speakers, mainly in Northern Sarawak, Malaysia. It is a Western Austronesian language and is most closely related to the Lun Bawang/Lundayeh and Sa’ban languages. Today, there are 18 longhouse communities where different dialects of Kelabit are spoken. This deposit includes materials collected in Bario and Pa’ Umor (where northern varieties of Kelabit are traditionally spoken) and Pa’ Dalih (where southern varieties of Kelabit are traditionally spoken). Some speakers from other villages are also represented in the recordings.

Short Description of the Deposit

Summary of the Deposit

This deposit includes audio, video and written materials in the Kelabit language, collected over four field trips and two research projects between 2013-2019. The audio and video materials are subdivided into three main genres: elicitation; naturalistic text and stimuli. The elicitation materials include word lists and elicitation sessions on phonology, morphology, syntax and information structure. The naturalistic text materials include discussions of culture and traditions, folk stories, oral histories, radio bario broadcasts, jokes, speeches, songs and discussions of the Kelabit language. The stimuli materials include a collection of pear story retellings, readings collected for a prosody experiment, translations collected using a translation task and data collected using picture and video stimuli, including the questionnaire on information structure (quis).

Written materials include scanned copies of handwritten field notes and the PhD thesis that resulted from the initial research project. This includes a basic sketch grammar (chapter 2) and more detailed description of Kelabit voice alternations (chapter 3), pronouns (chapter 4) and word order (chapter 5). More academic works may be added in future.

The recordings are transcribed into a working orthography and translated into English using the ELAN software. More information on orthographic conventions can be found in the PhD thesis but note that the glottal stop is now represented with ’ throughout the collection, following community recommendations. Discussions on Kelabit orthography are ongoing and hence the transcription system may be updated in future.

The Kelabit of Northern Sarawak, Malaysia.

The current corpus includes roughly 55 hours of audio material and 10 hours of video material in the Kelabit language. To find materials of interest, you can filter the recordings by genre, topic and sub-topic. Note that both topic & sub-topic appear under the heading ‘topic’ in the ELAR menu.

*The Palug Rayeh & Palug I’it (lit. Older Fool and Younger Fool) stories are a collection of tales about two brothers and the tricks that the younger brother plays on the elder brother.

The main genres of elicitation, naturalistic text and stimuli also include the following sub-genres. These appear in the titles of each recording and are also tagged as keywords. This means that you can search for them using the search bar in the top left corner of the deposit home page.

For more information on the different genres in the deposit, as well as an overview of the methods used for data collection and the context in which the deposit was created, please see Hemmings (2020).

Special Characteristics of the Deposit

In addition, subtitled videos of Kelabit, Sa’ban and Lun Bawang created through the project can be viewed in the following locations:

(1) The website for the project ‘Information Structure in the Languages of Northern Sarawak’: https://borneolanguages.ling-phil.ox.ac.uk/recordings

This deposit was initially created in 2017 and is the combined result of two research projects. The first project was a PhD project on ‘The Kelabit Language, Austronesian Voice and Syntactic Typology’ sponsored by the Wolfson Foundation, UK. The project ran from 2012‑2016 and involved documentation and description of Kelabit, as well as research into the symmetrical voice system and the place of Kelabit in the typology of Western Austronesian.

The second project was a postdoctoral research project on ‘Information Structure in the Languages of Northern Sarawak’ which was funded by an Early Career Fellowship from the Leverhulme Trust (ECF-2016-425). This ran from 2016-2019 and combined documentation and description of Kelabit, Sa’ban and Lun Bawang with research into the role that information structure plays in determining syntactic choices, such as word order and voice choice.

The materials in the deposit were collected by Charlotte Hemmings together with various members of the Kelabit community over four field trips. The PhD project included six and a half months of fieldwork from October-December 2013 and June-September 2014. The postdoctoral project included two shorter field trips between October‑December 2017 and January-March 2019. Most of the materials from the PhD project are already accessible. Materials from the post-doctoral research project are in the process of being uploaded and more materials may be added to the deposit in future.

I would like to thank the Kelabit community for allowing me to work on their language and sharing their extensive knowledge, culture and traditions. There are so many people who assisted in countless ways and without whom the research would not have been possible. I would like to extend particular thanks to Florance Lapu Apu for the many hours spent translating and transcribing recordings in Bario, as well as Lucy Bulan and Jeffrey Malang for assisting in Pa’ Umor and Pa’ Dalih. I also gratefully acknowledge the support of Rurum Kelabit Sarawak, the Sarawak Museum and the Wolfson Foundation and Leverhulme Trust, as research sponsors.

Users of any part of the corpus should acknowledge Charlotte Hemmings as the data collector and researcher. Individual speakers whose words and/or images are used should also be acknowledged by name along with any other contributors who helped transcribe and translate the data. This information can be found in the metadata for each recording.

Access and Usage restrictions were determined by the community members featured in the recordings. To update these, please contact the researcher.