Documentation of the oral literature of the Tai Khamyang community in Upper Assam, India 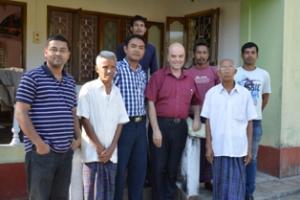 Landing page image for the collection “Documentation of the oral literature of the Tai Khamyang community in Upper Assam, India”. Click on image to access collection.

This collection is the result of a research project on Tai-Khamyang, which was developed in dialogue with the Tai-Khamyang community. The collection includes audio and video documentation of the oral and written traditions (history, traditional stories, songs, rituals, manuscripts, etc.) still narrated and sung by some of the older members of the community. These recordings were then used to produce textbooks and other language learning materials for the Tai-Khamyang Mother Tongue School, to help revitalize the use this language by its young native speakers.

This collection represents speakers of Tai-Khamyang, who live in the Powaimukh village in the Tinsukia district of Upper Assam in north-east India. Speakers are multilingual with Assamese as a second language, and the young generation is much more inclined towards Assamese as the state language and English as an international language. Today, the language is mainly used for religious or ritualistic purposes, and only by the handful of the older generation of speakers, around ten to fifteen people between 60-85 years.

Community members are concerned about the declining number of speakers and the loss of their oral literature and history, and they have made efforts towards language revitalization. In March 2012, they took part in a workshop for producing reading materials in Tai-Khamyang. Also, community members set up a self-funded school at the Powaimukh village where the Khamyang children are being taught the alphabets in Khamyang language. Community members are willing to assist with documenting and preserving their language and culture and consider the school as one of the important step. In order to provide more effective mother tongue education, however, the learners need a sufficient amount of reading materials. Therefore this collection includes language learning material based on the collected oral stories and narrations as culturally informed and appropriate stories in their mother tongue for the young and adult learners in the community.

Very little has been written on the origin, history and language of the Tai- Khamyang until now. Grierson’s (1904) ‘The Linguistic Survey of India’ does not mention Tai-Khamyang.

With only 20-25 fluent native speakers, Tai-Khamyang is facing extinction as the young generation shifts to the state language Assamese and to English.

The concept and formulation of the research project behind this collection is the result of the dialogue between the researcher Palash Kumar Nath (a trained educator in Mother-tongue-based Multilingual Education), the Tai-Khamyang Mother Tongue School and the Development Council for Singpho, Tangsa, Sema, Tai Phakey, Tai Khamyang, Tai Turung, Tai Aiton and Tai Khamti Communities.

The Tai-Khamyang Mother Tongue School is a result of the effort of a number of old Khamyang people who want their children and grandchildren to learn their mother tongue. At the time of the project, it was run on funds collected from the members of the Tai-Khamyang community. The school has been teaching some young children, young adults and even adults the Tai-Khamyang alphabets. However, the school needs a lot more reading materials in different formats so that the young learners become interested to learn the language.

In March 2012, during a workshop where Palash Kumar Nath taught, community members expressed their apprehension about the state of their language and asked Palash Kumar Nath if anything could be done to document and preserve their dying traditional traits and language, and if he could help them produce a greater number of reading materials for the Tai Khamyang school.

This project has therefore been discussed and formulated in order to help the community to document and preserve their language and culture and to help them with resources for producing more teaching materials for their school to help their language revitalization effort.

The materials in this collection were gathered and prepared between 2013 and 2014 as part of the research for Palash Kumar Nath’s Small Grant awarded by ELDP.

When completed, this collection will include audio and video recordings as well as still photographs of

These recordings and will be transcribed as much as possible and translated into Assamese and English.

The collection further includes Tai-Khamyang legacy materials, which will be newly transcribed as part of this project: