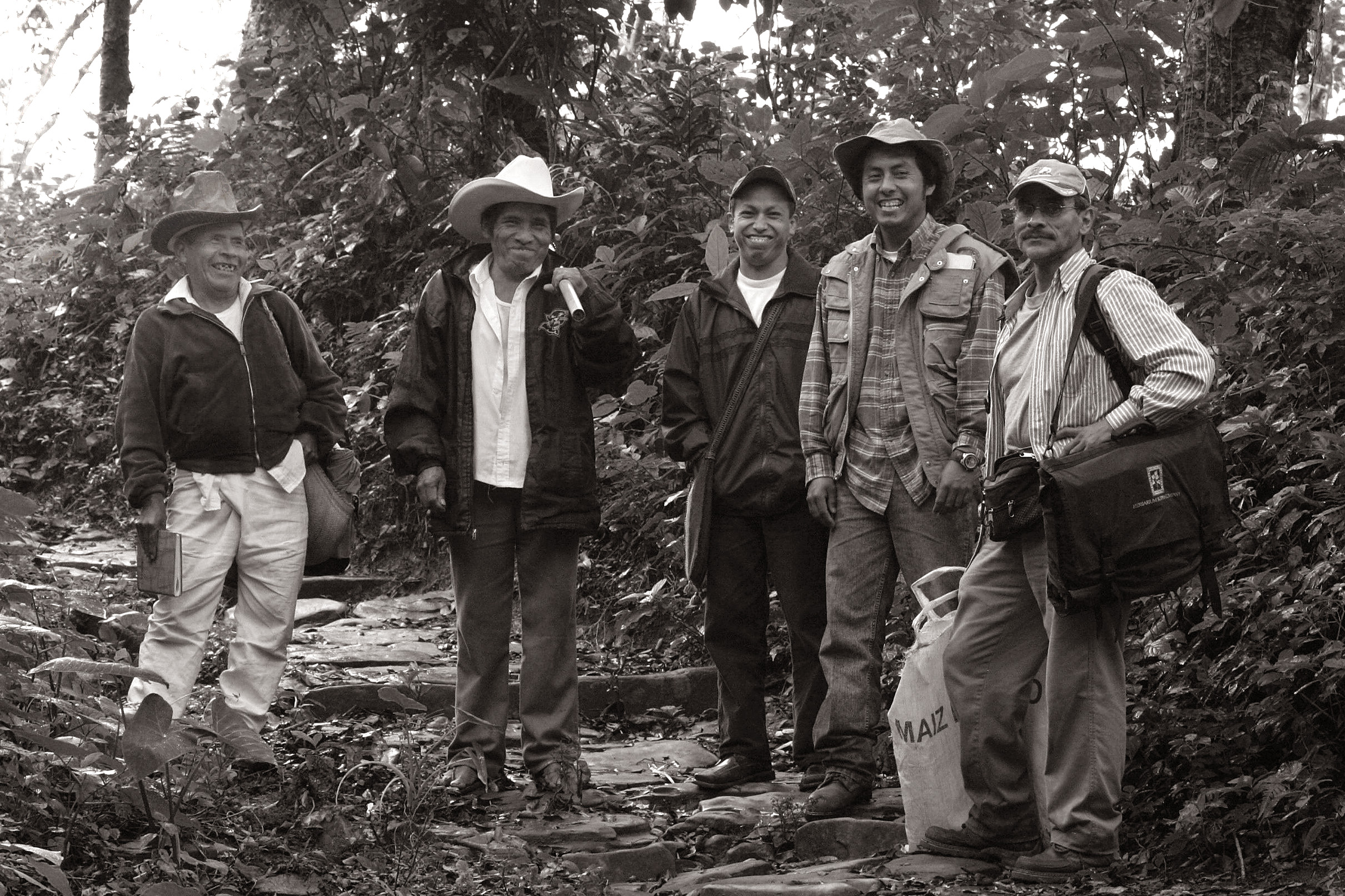 Landing page image for the collection “Documentation of Nahuatl Knowledge of Natural History, Material Culture, and Ecology”. Click on image to access collection.

The Nahuat spoken in the municipality of Cuetzalan is part of a regional language called Sierra Puebla Nahuat or Zacapoaxtla Nahuat.

This project focuses on three interrelated domains of endangered cultural knowledge and linguistic expression: nomenclature, classification and use of plants in Nahuatl communities in the municipality of Cuetzalan, Puebla, Mexico; the creation of objects of daily use from regional flora, and traditional ecological knowledge.

It builds upon experiences and trust Amith has developed after three years of lexicographic work. Two native speakers have advanced skills in digital recording, transcription, and ethnographic description. Three partnering Indigenous collectives facilitated work in scores of communities throughout the municipality and are building a cultural center to utilize project results in education and outreach.

This is a collection of materials produced for:

Amith has worked as an independent scholar in language documentation since 2000; he has been awarded a pilot and major ELDP grant for Yoloxóchitl Mixtec and three NSF Documenting Endangered Language awards. Amith has worked for over two decades on central Guerrero Nahuatl, in which he is fluent, and has worked for the last four years on Cuetzalan Nahuatl (azz), having produced a dictionary and part of a grammar.

Nahuatl community in the Municipality of Cuetzalan, Puebla, Mexico.

Language use, particularly intergenerational transmission, is rapidly decreasing. Over the last 50 years, most of the communities in the municipality of Zacapoaxtla (from which SIL material was drawn) have become monolingual in Spanish. At best they retain elder bilinguals and passive speakers among the younger generation.

Ayotoxco de Guerrero and Tlatlauquitepec , other municipalities that surround Cuetzalan, are also Spanish-speaking. Totonac-speaking villages border to the west. It is hard to estimate the number of speakers in the municipality of Cuetzalan but probably less than half of the 40,000 residents are fluent. The municipal capital, Cuetzalan, is Spanish-speaking except for immigrants from surrounding communities. Many of the larger outlying villages (e.g. Xiloxochico, Yohualichan) are populated by a younger generation of mostly passive speakers.

Researchers on endangerment have pointed out that knowledge of the nomenclature, classification, and symbolic and economic use of local flora and fauna is one domain that quickly gets lost as languages die and cultural activities shift. The disappearance of traditional uses of the environment (for fishing, snare-trapping, wood-frame and thatched roof house building) quickly leads to the loss of nomenclature (e.g. the different types of house beams) and knowledge (e.g. which woods are good for different parts of the construction). Knowledge that remains is generationally skewed towards elders and in some respects limited to one or the other sex.

There are no modern and extensive studies of the nomenclature and classification of biotaxa for any Nahuatl language. Over the past four years of working with Indigenous speakers in Cuetzalan, Amith has become painfully aware of the rapid loss of traditional ecological knowledge and the urgency of documenting this domain as soon as possible in a manner that will fill a large lacunae in material not only in Sierra Nororiental Nahuat, but in the study of all Nahuatl languages.

As in other areas of the Sierra Nororiental, intergenerational transmission of Nahuat is rapidly decreasing in many of the outlying settlements. Even in areas of retention, language change is occurring in a different way to many other areas where Nahuatl languages are spoken. In Cuetzalan, a combination of a puristic ideology (the effect of a radio station and the Indigenous collective Tosepan) and Spanish influence has led to a profusion of neologisms common in certain registers and, more interestingly, significant change in morphosyntactic structure.

The first is the result of Nahuat as a “language of solidarity,” a marker of group membership. To this effect neologisms (such as one for “Power Point presentation”, nexyo:t) have become common in particular social contexts and in some cases (tsope:li:lo:ni ‘sugar’) have made it into more general use. Also prominent are shifts in morphosyntax. For example, the Nahuat intransitive tikwi ‘to light up (e.g. firewood, a lightbulb’) is now reflexively marked – motikwi – because the Spanish verb is always so marked (‘prender+se’).

One unusual feature of the Nahuat spoken in the municipality of Cuetzalan is the effect of syllable weight and structure on word formation, a process not previously documented. Preliminary evidence suggests that importance of syllabic and metrical considerations in Sierra Nahuatl inflectional paradigms is changing: moraic and syllabic constraints on inflectional patterns are manifested differently in different generations of speakers. A large corpus of materials from individuals of different sex, age, and community will help to reveal patterns in this rapid language shift.

The large geographically and socially varied corpus that this study will produce will, then, contain much of interest to sociolinguists and linguistic anthropologists.

Traditional ecological knowledge (including nomenclature, classification, and use of regional flora) was recorded as each plant is collected. Tenorio photographed specimens while Amith recorded two-person conversations among Nahuat speakers and interviews the Totonac speaker.

Not all recorded material has been transcribed but a metadata database includes a field for a narrative description of the item. Thus all recordings will have at a minimum a narrative exposition of their content.

For a detailed overview of the collection in Spanish, please read the collection catalogue here: Catalogue of Nahuat (Glottolog = high1278; ISO 639‐3 = azz) recordings and transcriptions from the municipality of Cuetzalan del Progreso, Puebla, Mexico, as of 31 August 2020.

Two SIL researchers (Harold Key and Dow Robinson) worked in this region (though not in the municipality of Cuetzalan) from the 1950s to about 1970 and produced some grammatical and lexicographic material, including a grammar of Zacapoaxtla Nahuat by Robinson and a long word list by Key and his wife Mary Kay.

In the 1980s a group called the Taller de Tradición Oral was formed in San Miguel Tzinacapan, municipality of Cuetzalan. They produced two books, one of texts and one of plants (both in Nahuat and Spanish). However, there are no viable preserved recordings and the plant book has no voucher specimen deposits or little reliable scientific identification of plants discussed in the book.
The only audio found are five elicitation sessions from Yolanda Lastra’s survey on collection at AILLA. Besides these, there are no audio or visual materials on any Puebla Nahuat(l) language in an accessible archive.

In 2008, Amith received an NSF Documenting Endangered Language grant to develop a lexicon or grammar in the municipality of Cuetzalan, Sierra Nororiental de Puebla. He trained two native speakers (Amelia Domínguez and Eleuterio Gorostiza) who can carry out tasks necessary to language documentation (digital recording, transcription in ELAN and Transcriber, lexicography in Toolbox, morphological analysis).

The dictionary presently comprises 7,874 headwords and 21,208 senses, including phrases and collocations. Amith has also outlined a 51-chapter grammar and written drafts of the first 17 chapters, which cover the basics of phonology and morphology (particularly derivational and inflectional processes).

The project team included depositor Jonathan Amith, a full-time native speaker collaborator and a field botanist. The collection teams were comprised of different groups of four fluent Nahuatl speakers and one Totonac speaker, all of whom are expert natural historians.