Documentation of Nyagrong Minyag, an endangered language of Western China 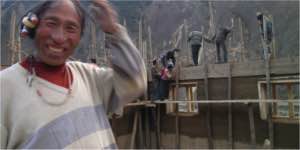 Deposit page image for the collection “Documentation of Nyagrong Minyag, an endangered language of Western China”. Click on image to access collection.

Nyagrong Minyag speakers number about 1,000 across two major dialect areas. All speakers are ethnically Tibetan and generally practice Tibetan Buddhism. They have traditionally subsisted on agriculture and herding. The name Nyagrong Minyag contains the autonym of its people “Minyag,” plus the name of the county “Nyagrong” in order to distinguish between other groups who identify as “Minyag.” There are two distinct dialect areas, Bomei (Bangsmad) and Manqing (Manchen), named after two townships in Nyagrong County. This project records only the Bomei dialect.

Nearly all speakers also speak the local variety of Kham Tibetan (known as “Nyagskad”). Although there are many children who are still learning to speak Nyagrong Minyag in the home, it is being replaced by Nyagskad in many domains. Those who receive a secondary-school education or are involved in trade also learn Southwest Mandarin Chinese. All speakers of Nyagrong Minyag are facing relocation because of hydroelectric dam construction that will put their homelands under water. Among other things, this could affect efforts to preserve and maintain the language for future generations.

Nyagrong Minyag (Sino-Tibetan, Tibeto-Burman, Qiangic, Rgyalrongic, Horpic) is an under-documented and endangered language spoken by approximately 1,000 ethnically Tibetan people in Xinlong (Nyagrong) County, Ganzi Tibetan Autonomous Prefecture, Sichuan Province, China. The Nyagrong Minyag language is endangered not only from usual factors such as decreasing intergenerational transmission and shrinking domains of use, but also from the likely relocation of speakers to make way for building hydroelectric dams on the Yalong River.

Like other Rgyalrongic languages, Nyagrong Minyag has an unusually large number of phonemes, including 42 consonants and twelve vowels. Many consonant clusters are permissible, allowing for a wide variety of syllable onsets. Uvularization as a secondary articulation on vowels is a phonemic feature; there are seven plain vowels and five uvularized vowel phonemes. Nyagrong Minyag is an SOV language with complex verbal morphology.

This deposit contains audio and video recordings that document the history and cultural practices of the Nyagrong Minyag people. Topics that these recordings document and/or discuss include, but are not limited to, the following:

Other audio recordings in this deposit are centered around the phonetics, phonology, morpho-syntax and lexicon of Nyagrong Minyag. These include audio recordings of elicitation sessions targeting the sound system, grammar and lexicon of the language. Of particular usefulness are recordings of twenty different speakers (thirteen males and seven females) speaking a wordlist designed to test hypotheses about the phonetics and phonology of the language.

More information on the Nyagrong Minyag language and people, as well as the findings of the linguistic investigations documented here, can be found in “The Phonetics and Phonology of Nyagrong Minyag, an Endangered Language of Western China,” John R. Van Way’s 2018 dissertation from the University of Hawai‘i at Mānoa (http://ling.hawaii.edu/wp-content/uploads/JohnVanWayFinal.pdf)