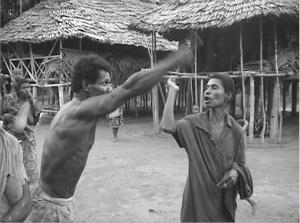 This collection documents speech varieties (definable registers) in Awiakay, and their relation to the overall social scene. It includes recordings, transcripts and analyses of lexical substitution registers such as ‘mountain talk’ and ‘hidden talk’, language of disputes and fighting, language used in Catholic charismatic activities, including spirit possession, laments, and all-night song/dance cycles, together with traditional knowledge necessary for understanding their use. Documentation of all speech varieties is accompanied with observational ethnographic films.

The Awiakay are a community of 303 people (Hoenigman 2010) living in Kanjimei. The village is located on the Konmei Creek, which is a tributary of the Karawari. Bounded by the Arafundi, Karawari and Yuat Rivers, this is an area of cultural intersection of various groups. Moreover, each of the area’s three contiguous Papuan languages belongs to a separate language group – Awiakay, which is spoken in Kanjimei, is an Arafundi language, Karawari belongs to the Lower-Sepik group and Miyak to the Yuat group.

Before 2004, no research had been done in Kanjimei village. Wurm and Hattori’s Atlas of Languages of the Pacific (1981-83) shows the location of Kanjimei as an uninhabited area (though close to Alfendio, i.e. Arafundi language). Even in the 2004 SIL East Sepik Province Language Map, the northern border of Arafundi does not reach Kanjimei. In Laycock’s (1973) survey of the languages of the Sepik, Kanjimei is not mentioned at all.

Based on the comparison of word-lists of 240-260 words (based on a on a Swadesh 200 item list) from 7 different Arafundi communities, which she recorded during my trips in the area in 2004 and 2006, the depositor argues there that Arafundi is a small language group, consisting of Awiakay, and at least 4 more distinct languages. No more than 29.5% of average cognacy was established among these languages.As Tok Pisin (one of the national languages and a lingua-franca in this area of Papua New Guinea), has achieved a significant position in all neighbouring communities (the Karawari-speaking Ambonwari, Arafundi-speaking Imanmeri and Miyak-speaking Asangamut), one can expect that in near future (also due to greater mobility of the Awiakay people who nowadays often travel to town to sell eaglewood) it will also have a considerable impact in Kanjimei. At the moment Tok Pisin dominates in the domains of church, Catholic charismatic practices, school, village courts, when speaking about non-traditional topics and in all contact situations. Code-switching between Tok Pisin and Awiakay occurs in public speeches, in quarrels and in many situations where a speaker (of any gender and age) wants to take an authoritative position in the communicative act. All the villagers are bilingual in Awiakay and Tok Pisin (the last monolingual speaker died in 2007), and children very early start using Tok Pisin. The Awiakay are mostly endogamous, but in cases of intermarriage they marry with people from Asangamut (originally Miyak speakers) where Tok Pisin has largely taken over and where none of the children can speak Miyak. In these families the language of communication is not Awiakay but Tok Pisin. Words from Tok Pisin increasingly enter Awiakay, but are often ‘Awiakaysed’, which means that they are adapted to the rules of Awiakay phonology and morphology. Given the intriguing descent of the Awiakay language, its relatively small number of speakers, and the rapidly changing socio-economic circumstances in the speech community, it is essential to document Awiakay language not only in terms of grammar and dictionary production, but in terms of its contextual varieties.

Awiakay is an undescribed Papuan language, belonging to the small Arafundi group, spoken by about 300 people living in Kanjimei village in East Sepik Province of Papua New Guinea.

This collection originates in MA and PhD fieldwork carried out among the Awiakay people between 2004 and 2012. The depositor spent a total of 23 months in the field, over five separate visits. From the depositor:

‘By studying various linguistic registers in Awiakay I gathered a rich data set which documents language use and socio-cultural practices in all spheres of social life: travelling, hunting and gathering in the Awiakay land and engaging with mountain spirits (‘mountain talk’), traveling to town and engaging with strangers (‘hidden talk’), domestic and village internal disputes and fights involving the knowledge and performance of oral history, traditional healing and magical spells vs Catholic charismatic activities involving prayer meetings and healing sessions, mortuary practices (dirges), all-night dancing song-cycles and kinship-related joking. By using video as part of my research I paid attention not only to verbal but also to non-verbal language: gesticulation and facial expressions are often distinctive markers of a particular linguistic register. In case of both ‘mountain talk’ and ‘hidden talk’ (Hoenigman 2011) I documented the formation of a new linguistic register in Awiakay, in response to new socio-economic circumstances.

There are three specific outcomes that I aimed to achieve in this project: (1) The completion of my PhD thesis together with the accompanying films, (2) the completion of a collection of materials specifically designed for return to and use by Awiakay speakers, (3) the completion of a return field-trip to Kanjimei to (a) refine materials, (b) record Awiakay people’s reflexions on their linguistic practices. Appropriate materials are archived in ELAR, PARADISEC, and in the PNG National Research Institute’.