Telling and Re-telling: documenting Longgu, an Oceanic language of the Solomon Islands 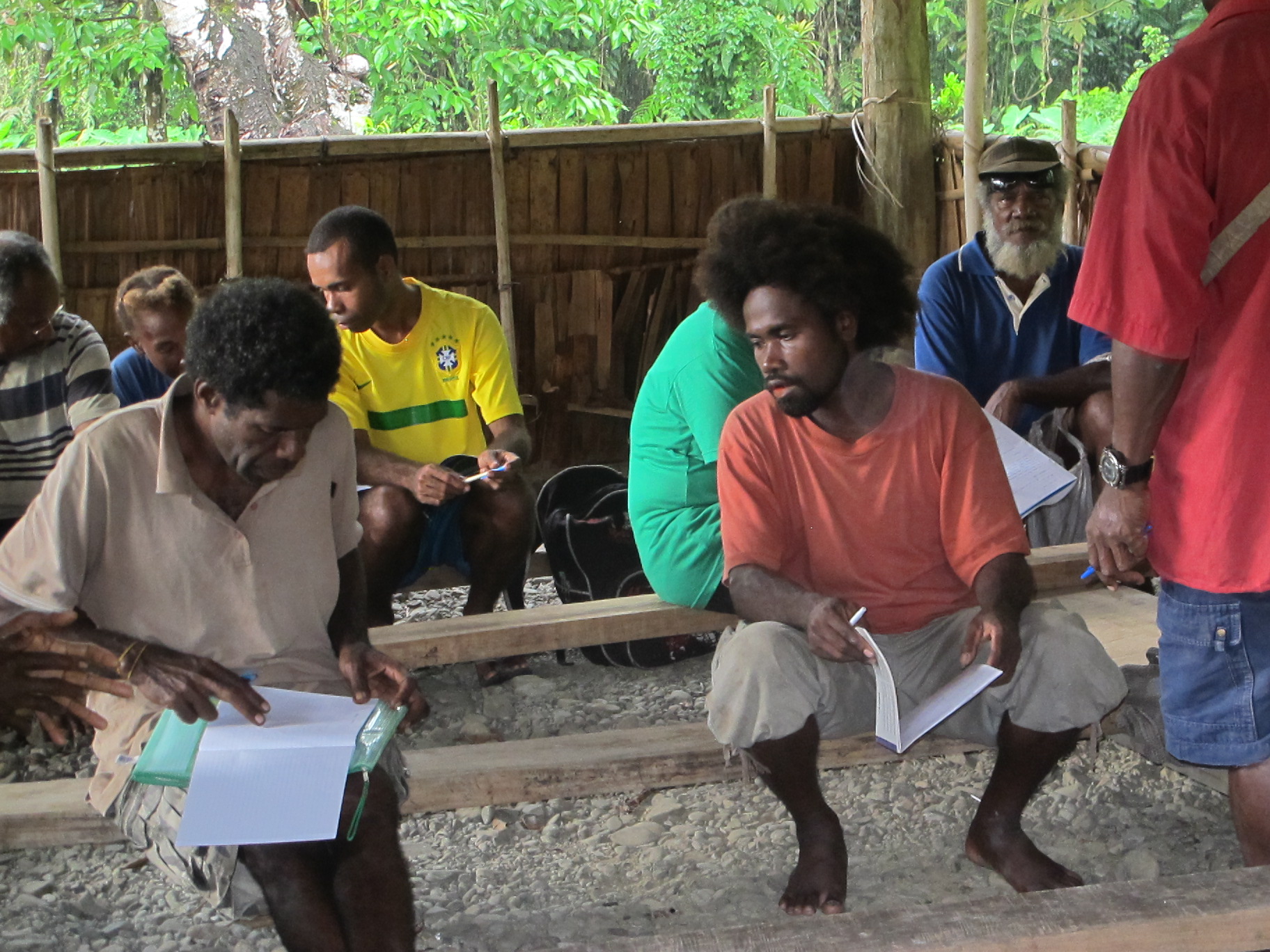 Some of the people taking part in the weaving dictionary workshop (August 2011, Nangali, Longgu Island). At the back from the left there are Ataban Kebu (face not fully visible), Mary Tovoa, John Bosawana, an unknown female and Steward Bungana. At the front from the left there are William Tarauva, Michael Matea and Gabriel Ropovono (standing with back to camera). Landing page image for the collection “Telling and Re-telling: documenting Longgu, an Oceanic language of the Solomon Islands “. Click on image to access collection.

This collection includes documentation of folkloric stories and procedural texts of the Longgu (ISO 639-3: lgu) people (1,890 speakers), Guadalcanal, Solomon Islands (-9.64, 169.78). These texts augment legacy data covering the same content and genre, providing a longitudinal study of an Oceanic language. The texts preserve cultural knowledge related to the five Longgu clans, and relate to the cultural practice of learning about kinship through giving and receiving food. The texts will be used to develop materials, including a thematic dictionary on weaving, for use in schools as the Solomon Islands moves to the use of local languages in education (from 2012).

The Longgu community is under pressure from urbanisation and movement away from the villages. Dobrin (2005) has argued that while lack of speakers is typically cited as the reason languages die, in Melanesia a lack of listeners contributes to language endangerment. Longgu vitality depends on younger people listening to stories and learning the traditions of their elders. The materials in this collection address this challenge by documenting stories that contribute to younger speakers’ understanding of their customs and traditions. However, it will be children rather than youths who are learning the stories and the stories will be told in a school setting.

Longgu is an Oceanic language spoken on Guadalcanal in Solomon Islands. It is a member of the Southeast Solomonic family of the Central/Eastern Oceanic subgroup of languages (Lynch, Ross and Crowley, 2002: 108-110). This family can be separated into two further groups: Bugotu/Gela/Guadalcanal and Longgu/Malaita/Makira. It is Longgu’s position as a member of the Longgu/Malaita/Makira branch of the Southeast Solomonic family, while being geographically the smaller neighbour of languages from the Bugotu/Gela/Guadalcanal branch, that has created challenges for its speakers in the context of the recent Solomon Islands’ ethnic conflict.

Longgu is spoken by 1890 speakers (1999 figures) and is geographically adjacent to the Guadalcanal languages of Lengo (13,600 speakers) to the north and Birau (5,900 speakers) to the west. One village, Bambasu, is adjacent to Marau (a dialect of the Malaitan language Are’are). To communicate with people from neighbouring languages, Solomons Pijin, the national lingua franca, or another language (e.g. Birau, Lengo, Marau), is used.

English is the official language and was the language of education until 2012. Solomons Pijin is the national language and the language of communication between teachers and students. Until 2012, Longgu had no official status in educational settings. However, this changed in 2012 when a new National Languages Policy was introduced. Under this policy, local languages became the medium of instruction for the first three years of school.

Longgu is faced with significant pressures as a result of its demographic profile. In this respect, it is similar to other Solomon Islands’ languages. A growing population and the presence of a youth bulge (Ware 2004) (mean age in 2007 was 19.6 years), has led to greater urbanization. Population growth has created pressures on land. This has resulted in many young men leaving the villages to stay in town. Increasing intermarriage between people from different language groups, greater movement of people between Honiara and the village, and education in English has led to an increase in the use of Pijin in the villages over the past 20 years (based on a field trip to Nangali village in December 2010). As a community, Longgu has fuzzy boundaries (see Himmelman, 2008). Its numbers are growing, but this growth does not necessarily reflect a growth in the use of Longgu.

Longgu is not an endangered language. However, ethnic conflict between 1998 and 2003 has led to the rapid attrition of a significant language domain.

This collection contributes to Oceanic linguistics by providing the first set of longitudinal data on a language over a 20-year period. Both text types were compared with respect to the content, genre markers (i.e. typical folkloric story beginnings and endings), vocabulary, syntactic structure, and discourse structure.

When completed, the collection will contain

Folk stories have been selected because firstly, documenting the stories includes documenting the cultural practices associated with them. Secondly, they constitute a type of Aesopian language, preserving cultural knowledge. Thirdly, they form the basis of a longitudinal study of the language as legacy data of this type exists. Finally, they can be used in the school curriculum when Longgu is used as a medium of instruction.

Basket weaving has been selected because the community also articulates its identity through the transmission of traditional skills. Longgu people are not known for a wide range of traditional crafts. However, basket weaving is a craft that community leaders would like younger people to learn. Both men and women weave baskets and so it is an appropriate craft to document for the purposes of school materials. In addition, baskets play a cultural role in the life of Longgu, a matrilineal society. Traditional baskets are significant as part of the practice of offering food to relatives, especially in the mother’s clan. The reciprocal nature of rights and responsibilities is typically expressed by the sharing of food. Hogbin (1964, p. 36-37) notes that children learn about kinship relations through the giving and receiving of food. This practice reinforces understanding of their clan relations.The procedural texts, then, play a role in maintaining an understanding of clan and lineage.

Deborah Hill has carried out fieldwork in the Nangali village between 1992 and 1994 as a post-doctoral fellow in the Cognitive Anthropology Research Group (MPI, Nijmegen) and has maintained links there since then. In December 2010, she visited Nangali and held discussions with Nangali School Chairman, a teacher, and the five Nangali chiefs (including the Paramount Chief of Longgu). The collection archived here is a result of their discussions and reflects their needs and interests.

The new materials in this collection have been collected between 2012 and 2013 during the fieldwork for Deborah Hill’s research funded by a Small Grant from ELDP.