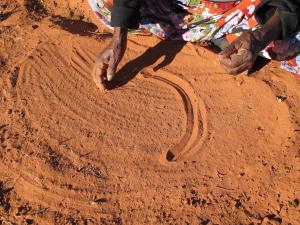 This collection is a significant and unique contribution to the documentary record of the
diversity of Arandic verbal/visual art forms, containing examples of sand stories and of sign language documentation which are a highly valued yet endangered part of the traditions of Central Australian peoples.

The deposit represents speakers from a majority of the languages within the Arandic group – Northern & Southern Alyawarr, Central & Eastern Anmatyerr, Eastern & Central Arrernte (sometimes referred to as Mparntwe Arrernte) and Kaytetye.

Arrernte, Anmatyerr, Alyawarr, and Kaytetye are languages of the Arandic sub-group. There are about 3000 speakers of the various Arandic languages in total. Warlpiri is a language of the Ngumpin-Yapa sub-group. Both sub-groups are part of the broader Pama-Nyungan language family of Australia.

In addition to everyday language, speakers of Arandic languages use a range of other communication systems including spoken auxiliary languages, song, conventionalized sign language, spontaneous gesture, and the symbolic or graphic conventions used in sand stories and various forms of Aboriginal art. In storytelling events it is the norm for several of these systems to co-exist, be interdependent, and to mutually elaborate each other. Gestures and conventionalized hand signs replace or augment the spoken word, and the ground or other inscribable surfaces are used for rendering semi-permanent diagrams that accompany the telling of stories. In traditional sand stories the use of the ground reaches its most elaborate form, and a small set of conventionalized graphic symbols are used along with speech, gesture and sign.

Non-verbal communicative systems are highly endangered, as are traditional forms of verbal art incorporating multiple semiotic systems. Older Arandic people lament the fact that younger generations are losing knowledge of sign, and younger people are keen to record the non-verbal communicative registers of their elders.

This collection contains documentation of sand stories and of sign languages from Central Australia. Sets of multimodal annotations of a selection of the stories. Such micro-annotations are available for subsequent theoretical analyses and are archived with the associated video and audio media.

The project research scoped to include senior women, men, and younger generations of storytellers in a variety of genres of narrative:

Kinship narratives – this is a rich domain in Arandic languages that draws on a range of
semiotic systems: speech, hand sign, gesture and drawing

Journey narratives (Slobin 1996) used in teaching about country and Dreamings

Games – the ground is used for games that are commonly played in desert communities.

Building on links that established with Arandic communities over 30 years and using methodologies developed during her doctorate, Dr. Jenny Green, conducted her research through multimodal recording technique which resulted in several perspectives simultaneously so as to document both the narrator’s use of the air (for sign and gesture) and their use of the ground (for drawing). Additional recordings will provide cultural explanations and other exegeses of the stories. This deposit’s complex video and audio data sets are exemplars of the way that verbal and non-verbal aspects of Arandic narrative performances are integrated. Arandic students were provided training in multimedia documentary techniques, and in the translation and annotation of texts. The students were involved in the recording of stories, in translation and interpretation tasks and in community consultations.

Users of any part of the collection should acknowledge Jenny Green as data collector and researcher. Users should also acknowledge the Endangered Languages Documentation Programme as the funder of the project. Individual speakers whose words and/or images are used should be acknowledged by name. Any other contributor who has collected, transcribed or translated the data or was involved in any other way should be acknowledged by name. All information on contributors is available in the metadata.