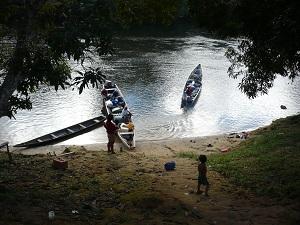 Landing page image for the collection ’Documentation of Ye’kwana in the Erebato river in Venezuela’. Click on image to access collection.

This collection contains 43 video, 47 audio, 11 ELAN, and over 60 transcriptions and other documentation carried out in two Ye’kwana villages of the Caura Basin in Venezuela: Anadekenña (Boca de Piña) and Ijüwütünña (Santa María de Erebato).

The Ye’kwana population is located in the two southern states of Venezuela: Amazonas and Bolívar (according to the 2001 census, 6.523 individuals identified themselves as belonging to the Ye’kwana ethnic group). A smaller group – about 430 (Moreira-Lauriola, 2003) – lives on the other side of the border in the Roraima state in Brazil. The groups in Venezuela live by the Caura, Cunucunuma, Paragua and Ventuari rivers and their tributaries, and by the Auaris and Uraricoera rivers in Brazil (Moreira-Lauriola, 2003). Since the Ye’kwana are an extended group, they are in contact with many different languages. The population in the Caura basin – 2157 individuals from an internal census in 2006 – mainly shares the area with the Sanema (Yanomam). The population is distributed throughout 16 villages in the Caura basin, some of which are also in contact with Hoti (isolate) and Pemón (Carib) groups and more recently with Hiwi (Guahibo) groups. Ye’kwana people of two villages of the Caura Bassin in Venezuela: Anadekenña (Boca de Piña) and Ijüwütünña (Santa María de Erebato) are represented in this deposit.

Ye’kwana, also known as De’kwana, Maquiritare and Mayongong, is part of the second largest language family of South America, the Cariban family. According to one of the most recent and reliable genetic classification, Ye’kwana is part of the central branch of the family with four other living languages: Wayana, Mapoyo and Yawarana (all spoken in Venezuela) and Apalai (spoken in Brazil) (Kaufman 1994). With his more conservative classification of the family, Gildea (2007) sets a number of languages aside, including Ye’kwana, because the data available does not support Kaufman’s classification of those languages. Nevertheless, in the last two decades, there has been an increasing number of scholars working on Cariban languages, who have proposed new and reliable data for the reclassification of some branches of the family, but who also brought new perspectives to the existing linguistic theories: Abbott 1991, Hawkins 1998, Meira 1998, Meira and Franchetto 2005. The remaining residue languages as in the case of Ye’kwana, crucially need such new work and will benefit from recent works.

The sociolinguistic facts show a relatively healthy language community in which the language is still used in most communication spheres; it is transmitted to younger generations and is still mostly spoken by monolinguals. However, these characteristics were observed in a rural and traditional context. Moreover, the statistics of the 2001 census reveal that the proportion of Spanish bilinguals is higher in the Amazonas areas. Therefore, the Ye’kwana group, although well preserved, is substantially influenced by the dominant language – Spanish.

The collection includes a number of high quality video recordings of procedural texts, showing building techniques, food and cooking, crafts, hunting and preparation of tobacco leaves, described by community members. It also features folktales and stories recounted by some of the older members of the community, about animals, various mythical characters, and events such as a kidnapping. Subscribers can also listen to personal narratives and interviews, which touch on cultural topics including skill acquisition, the learning of songs and stories, and local prohibitions and taboos. Video and audio recordings have transcriptions and translations into Spanish and will be employed in producing community materials or for research.

The actual concern among community members is about traditional oral knowledge. The changes in their way of life – school and outboard motors, electric grinders and other things that require spending – leave the people with less time to sit and listen. The community feels it has lost valuable information as many of the elders have died and with them traditional historic and ceremonial knowledge. A few community members in the Caura have started individual efforts in order to document some of the traditional tales and most of the ceremonial chants. This project aimed to assist the community to document and preserve their oral traditions.