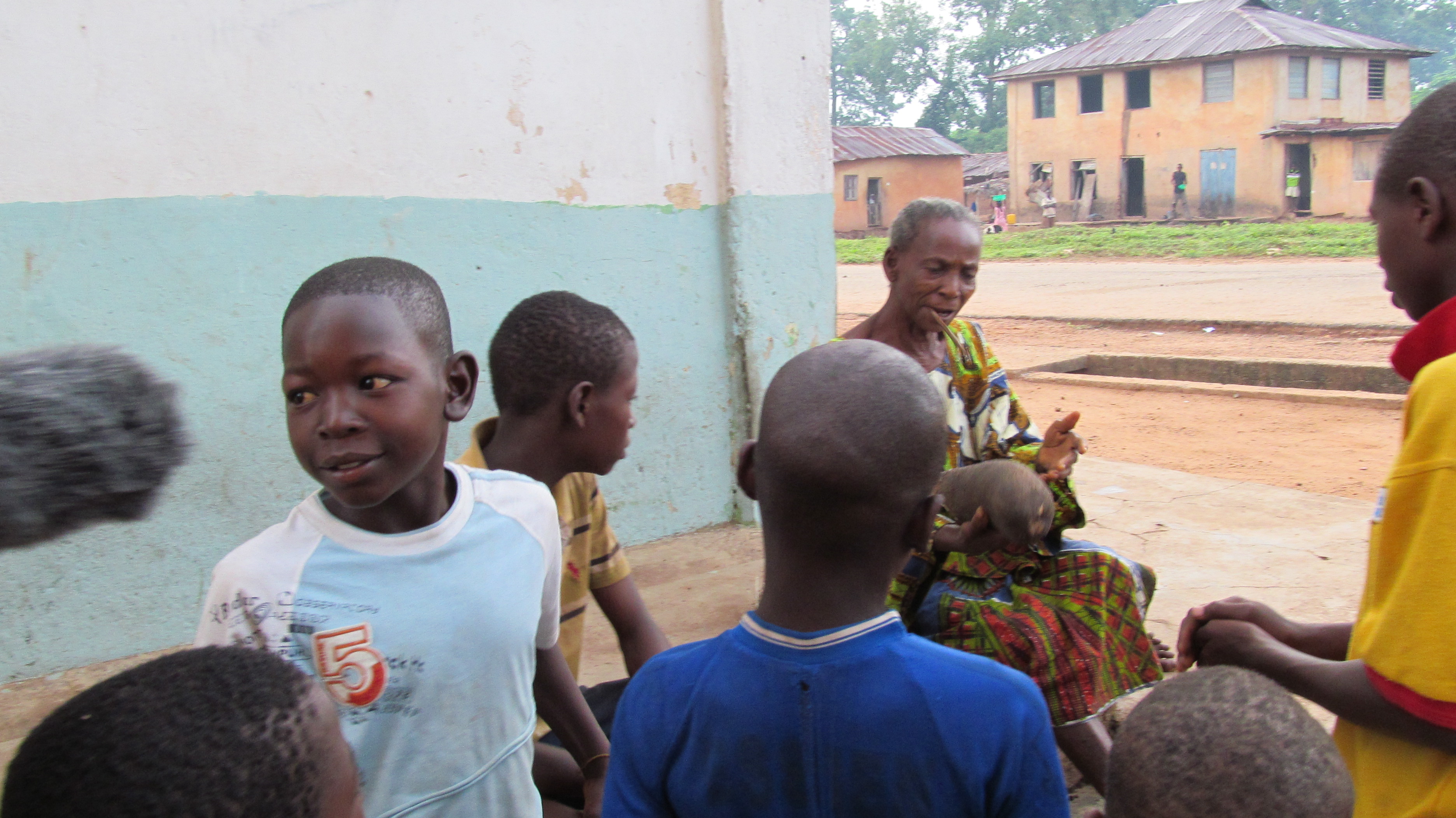 Landing page image for the collection ’Farming, food and yam: language and cultural practices among Ikaan speakers’. Click on image to access collection.

Ikaan, a dialect of Ukaan, is spoken in two villages in south-western Nigeria. This collection investigates phonetic and phonological variation among speakers based on a documentation of language around, knowledge of and practices in food, food production and farming, with a special focus on the New Yam Festival.

The data was collected by Sophie Salffner, linguist and principal investigator, Maria Tzika, visual anthropologist, and the community members themselves.

The collection includes an annotated audiovisual documentation corpus with data from a wide range of speakers, but also an anthropological visual map and two documentary films: “The King of Food” about yam and its significance in the community, and “B’urhun, b’uyag” about three women and the food they produce for eating and selling.

The picture at the top shows Janet Olusi, the most senior woman in Ayede quarter of Ikakumo (Ondo) as she is blessing the new yam that the small boys brought to her in the morning of the new yam celebrations.

An peer-reviewed open access overview article of the collection can be downloaded from the journal Language Documentation & Conservation either from the webpage of the journal issue or via the direct link to the article.

This collection is mainly made up of material of the Ikaan lect spoken in Ikakumo (Ondo State) and Ikakumo (Edo State). The Ikaan lect is part of a larger cluster of lects that is referred to in the linguistic literature as “Ukaan” or “AIKA”. Other languages included in the material are Yoruba, Ebira, English and Abesabesi (Akpes).

The collection contains photography as well as audio and video recordings of village life that were shot by the school children in the community. Children filmed their family members making baskets or frying gaari, interviewed them about their past and filmed each other on their farms or while helping in the house. Photography and video shot by the children in 2013 as part of the Ikakumo Photography School held by Asya Gefter with help from Adesoji Olusi and Sophie Salffner was put together in an exhibition shown in London, Ikakumo and Ibadan.

The collection further contains films of a traditional funeral for a very old lady and interviews with the family of the old lady and with the people who participated in the funeral. Funerals such as this one are held only rarely these days because very few worshipers of the traditional faith remain. We are most grateful to the Obagaye family, who have given us permission to film the funeral and to collect the data with the archive.

The collection can be broken down into five clusters of data: linguistics, sociolinguistic background information, anthropology, documenting the documentation, and project outputs. Each cluster contains larger themes, such as farm walks within the linguistic cluster, or recordings and interviews around a traditional funeral within the anthropological cluster. For each theme, the collection contains a mini guide, e.g., ikaan564 “Mini guide to blocks worlds recordings”. Each theme contains a number of bundles, for example a particular farm walk, or a particular interview about the funeral.

Most data is accessible to registered users, but some resources have restricted access because of conflict within the community or because they contain personal biographical data.

In summary, the collection contains the following materials:

The data for this collection was collected during the postdoctoral research of Sophie Salffner, the principal investigator. The first set of data was collected in May, June and July 2012, when Sophie Salffner and Maria Tzika went for fieldwork to Ikakumo. After Sophie and Maria left, the children and other community members collected more data, and Fred Adekanye continued with the transcription and translation of the data.

In 2013, Sophie returned to Ikakumo to show the films shot in 2012, work more with the community and to collect more data. She was accompanied by Asya Gefter, a photographer, artist and researcher, who worked with the children in Ikakumo to take photos of everyday life, school and play.

A smaller subset of recordings was gathered and prepared as part the of DoBeS-funded research project “Prosody and gestures in multilingual speakers” (Volkswagen Stiftung, Project Number 87 096) with the principal investigators Ulrike Gut and Mandana Seyfeddinipur. The recordings for this subset were made by Yun-Hsin Funmi Chang, initially transcribed and translated by Fred Adekanye, and later annotated more closely by Sophie Salffner (prosody) and Julius Hassemer and Nicole Stein (gestures).

Users of any part of the collection should acknowledge Sophie Salffner as the principal investigator and Sophie Salffner and Maria Tzika as the data collectors and researchers. Users should also acknowledge the Endangered Languages Documentation Programme as the funder of the project. Individual speakers whose words and/or images are used should be acknowledged by name. Any other contributor who has collected, transcribed or translated the data or was involved in any other way should be acknowledged by name. All information on contributors is available in the metadata.