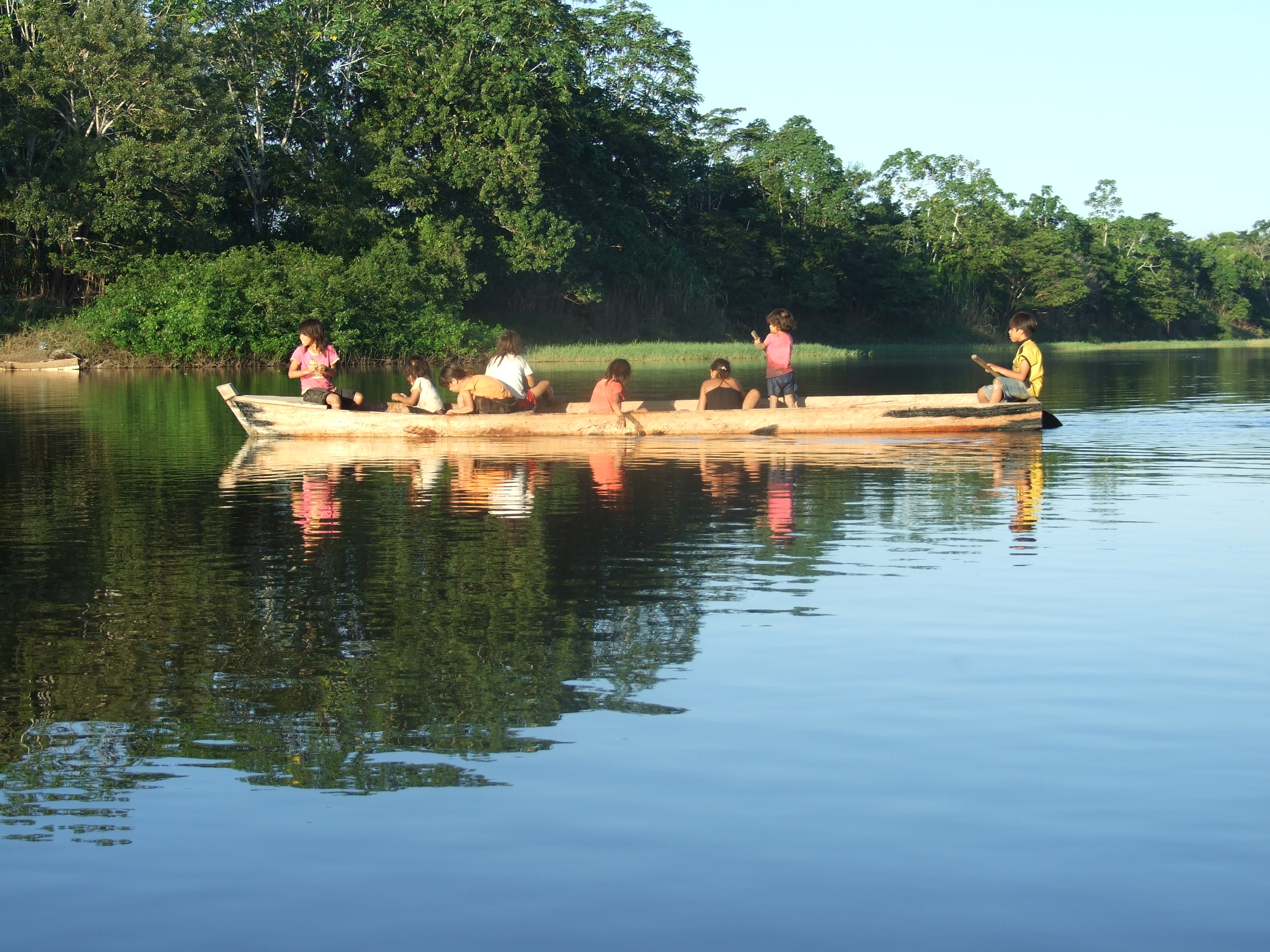 Deposit page image for the collection ’Documentation of the Ese Ejja language of the Amazonian region of Bolivia’. Click on image to access collection.

The deposit consists of audio and video recordings with transcriptions of Ese Ejja, an endangered language spoken in the Bolivian and Peruvian lowlands, resulting from fieldwork mostly conducted in Portachuelo Bajo, Bolivia, between 2005 and 2017. It also includes a bundle of all publications based on the Ese Ejja data collected.

On the group (extracted from Alexiades and Peluso (2009:222)) “Numbering about [1,500], most [Ese Ejja] live in nine titled communities widely dispersed along the Madre de Dios and Beni rivers and their tributaries in the border areas between Amazonian Peru and Bolivia. While subsistence strategies and the degree of involvement in market-based activities vary among individuals, households and communities, as well as countries, most [Ese Ejja] practise swidden-fallow agriculture, hunt, fish, gather and process forest products, and are involved in commercial forest extractivism. Most men occasionally, and some frequently, work as labourers in the agricultural, extractive or service sectors. Increased market involvement, with its corresponding lowland, riverine and sedentary settlement, and a more agriculturally-based subsistence are twentieth-century phenomena, associated with postrubber boom downriver migration (Shoemaker et al. 1975; see Zent [2002]) [see the story of their first encounter of the Beni river by ’Dejja’oshe ‘Ese Ejjaja meshi’]. Present-day settlement and subsistence contrast sharply with those which prevailed at the end of the nineteenth century. High levels of residential and circulatory mobility, and a heavy reliance on hunting, fishing and gathering, complemented by a dispersed form of plantainbased agriculture, together with a material and symbolic affinity with the headwaters (eyobi), are all additional characteristic features of the lifestyle and subsistence of the etiikiana, or ‘ancestors’ (antiguos, in Spanish).” On Portachuelo Bajo, the community in which I spent most of my fieldwork. Portachuelo consists of three communities (Bajo, Medio and Alto) that were once along the Beni River. A meander of the river however was partially cut off, forming an oxbow lake (that still communicates with the Beni) and an island that are now in the immediate vicinity of the communities. Women like to go fishing there (cf. pictures and recording by Kojjamá ‘ekwana pokiani’ (bundle 20070604)). While Portachuelo Medio is a settlement of people of Tacanan origin who now speak only Spanish, Portachuelo Bajo and Alto are two Ese Ejja communities whose inhabitants speak their ethnic language on a daily basis. Portachuelo Bajo was created in the 30s and the Ese Ejja officially settled in the 60s with the help of SIL missionaries who bought the land. Portachuelo Alto was founded a decade after by (Sonene) Ese Ejja coming from Peru. Since my first fieldwork season in 2005, the two villages have undergone drastic changes. The journey from the villages to Riberalta used to last approximately 10 hours – including a boat ride to a very basic ‘harbor’ in the middle of the forest, walking in the forest, and hitch-hiking by a dusty road. The return journey relied on a pre-arranged boat ride over a radio call a few days before. Since 2009, a moto taxi reaches Riberalta in two hours, via Las Piedras, Pando. Each household owns a 3-room concrete house with access to running water for a few hours in the evening. Electricity was scarcely available by an electric generator in 2005, while now all households have in principle access to it. However, in practice many households cannot afford it.

The Ese Ejja (ISO 639-3: ese) language is also known as Ese Eja (in Peru); Chama and Huarayo are two rather pejorative names still widely used in Bolivia and Peru, respectively. Approximately 1,700 Ese Ejja people live in southwestern Amazonia, in 9 villages in Bolivia and Peru. Ese Ejja is classified as a (Pano-)Takanan language, with approximately 1,500 Ese Ejja speakers and three variants: Madidi, Sonene and Baawaja. The Baawaja variant is the most distinct and is moribund; the Madidi and Sonene variants are very close and still used on a daily basis in most villages though not always transmitted to the younger generations. Most speakers are bilingual in Spanish, but their degree of bilingualism varies a lot. In the two very close communities of Portachuelo Bajo and Alto, where most recordings of this archive were made, most children speak Ese Ejja when interacting with other children. Given that the people of a third closeby village (Portachuelo Medio) are of Takanan origin and no longer speak their ethnic language, all children however have daily exposure to Spanish. Among its interesting phonological features Ese Ejja has two voiceless implosives and a complex verbal accent that is sensitive to stem valency. The morphology of the verb predicate is also intricate, with its 15 slots: roots can combine to form a compound stem, nouns can be incorporated and numerous morphemes of a (more or less) clear lexical origin suffixed. Of specific interest are the Aktionsart verbal suffixes with their adverbial semantics and the rich system of 14 ‘associated motion’ morphemes, also attested in the sister-language Cavineña and in some Australian languages. Predicative adjectives are the most frequent of the two adjective classes, and productively incorporate nouns. The 4 posture verbs are polygrammaticalized and thus omnipresent in the grammar: they appear in basic locative, existential and possessive constructions or as suffixes of present and of imperfective. Two systems of co-reference are distributed among 4 types of subordinate clauses: both systems are tripartite, i.e. go far beyond the better-known ‘same subject/different subject’ binary opposition.

The deposit includes a very interesting text on naming in Ese Ejja (20071019), that fairly echoes the naming practices described by Peluso (2004), and nicely illustrates how posture verbs are gender sensitive. Many personal narratives include considerations about how they now live in comparison to how they used to, or how different they are from what Lepri calls the ‘Bolivian nationals’ in her thesis on Ese Ejja identity (2003).

When I found out that only the elders could still tell most traditional stories, I recorded the myth of the Sloth-woman from several elders, and organized a workshop with a dozen Ese Ejja women who illustrated the main actions. We exposed the pictures and played the recording on one afternoon in the village (20080817). I then issued two types of booklets consisting of an abridged version of the myth: one contained the women’s drawings to illustrate the main events, while the other one was left blank and distributed in various classrooms for the children to illustrate it. The booklets were issued after long debates on alphabets (20080911 and 20080911), and served as a support to help Ese Ejja consider the pros and cons of the Spanish influenced orthography established by the missionaries (the one most in use by then) vs. one issued from the normalization of the alphabets conducted in 1995-96 by the Bolivian government. They triggered many lively discussions in the households and hopefully helped to revitalized one of the traditional stories.

In 2020, SOAS student Katarzyna Maja Hajtanian Śliwińska worked with materials from the collection, using PDF transcriptions (with glosses) and separate audio and video files created originally by Marine Vuillermet. Maja turned these into segmented and transcribed ELAN files in order to then build a FLEx database based on the Ese Ejja collection. You can find the original resources as well as the ELAN transcription files in the following bundles:

The data were mostly collected in Portachuelo Bajo and Alto, Bolivia, with about 30 consultants. The deposit includes word lists, personal narratives (1 hour), traditional life and beliefs (1 hour), traditional stories (2 hours), some conversations, elicitation with well-known stimuli (3 hours) like Mayer (1969) and Bowerman and Pederson (1992). Additional recordings from Peruvian consultants, some speaking the moribund variant are still to be deposited in the future.

The data were collected between 2005 and 2017 during 8 field trips. Most recordings performed before 2013 were transcribed into toolbox text files. The transcriptions of many texts after 2013 are only available in notebooks – digitalization is under progress – and several audio and video recordings needs to be transcribed. Most data deposited in this archive are also available at Ortolang (http://sldr.org/voir_depot.php?lang=fr&id=934&prefix=ortolang-).

Because there has been three different alphabet in use since my first fieldwork (and two different ones are still in use in the two countries), not all transcriptions are in the same alphabet. I am still harmonizing my Toolbox database according to the official Ese Ejja alphabet used in Bolivia.

Users of any part of the collection should acknowledge Marine Vuillermet as the principal investigator and data collector and researchers. Users should also acknowledge the Endangered Languages Documentation Programme as the funder of the project. I am very grateful to Katarzyna Maja Hajtanian Śliwińska, who entered original transcriptions and glosses into ELAN annotation files. Individual speakers whose words and/or images are used should be acknowledged by name, except for the ones who wished to remain anonymous. All information on contributors is available in the metadata.