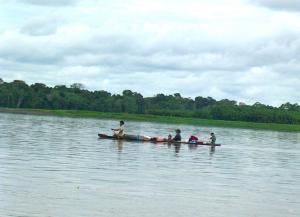 Outcomes of the documentation project will include:

Kukama-Kukamiria is a deeply endangered language spoken in the Peruvian Amazon by approximately 1500 people. The remaining fluent speakers of the language are mostly older than 60 years, are spread out across various small villages, and speak the language in very restricted situations. There are few monolinguals, and natural processes of language transmission have been interrupted by speakers shifting to Amazonian Spanish.

Kukama-Kukamiria communities are located on the upper Amazon River and several of its major tributaries, including the Huallaga, Marañon, Ucayali, Nanay, and Itaya rivers. The estimated 120 Kokama villages are located in the Peruvian department of Loreto, specifically in the provinces of Maynas, Alto Amazonas, Requena, Maquia and Ucayali. A considerable number of Kukama-Kukamiria now reside in cities within Loreto, such as Iquitos, Pucallpa, Yurimaguas, Lagunas, Nauta, Requena, and midesize towns like Tamishacu, Mazán, among others. During the boom of the rubber era, towards the end of the XIX century and the beginning of the XX century, small groups of Kukama-Kukamiria migrated to Colombia and Brazil. In Colombia, an estimated 250 Kukama-Kukamiria are located on the Island of Ronda; in Brazil about 50 families live in the Solimões region.

Based on linguistic and geographic criteria, the people identify themselves with two dialects: Kukamiria (Kokamilla), which is spoken basically in the upper Huallaga River, in the western side of the Kokama area, and Kukama (Kokama) along the Marañon, Samiria, Ucayali, and Amazon Rivers, towards the east. However, from a linguistic perspective, only a few phonetic and lexical differences have been found between these two dialects.

The interviews were conducted primarily by two indigenous language specialists, members of the speech community:

The fact that the community members themselves conducted the interviews had a profound impact on the quality of the recordings that we were able to collect. On the one hand, it was clear that the topics of conversation clearly mattered to all the interlocutors involved. Some of the recurrent topics of conversation were the origins of the villages, the multiple migrations throughout the years, their family connections in other villages, etc. On the other hand, the collected material was quite different in nature than the data I collected during exploratory trips. The data collected by the community members includes more vivid and morphosyntactically complex language, rich in metaphorical figures and prosodic contours. We visited 16 villages and interviewed 42 speakers in total. Pascual Aquituari Fachín, an elementary school teacher, also helped to conduct interviews in Lupuna, his village of origin. More details of the project can be found here.

The documentation project was launched in 2003; however, this collection includes recordings from 1999-2011. By the end of 2011 we had collected samples from fifteen villages, two mid-town cities (Nauta and Lagunas), and two cities (Yurimaguas and Iquitos).