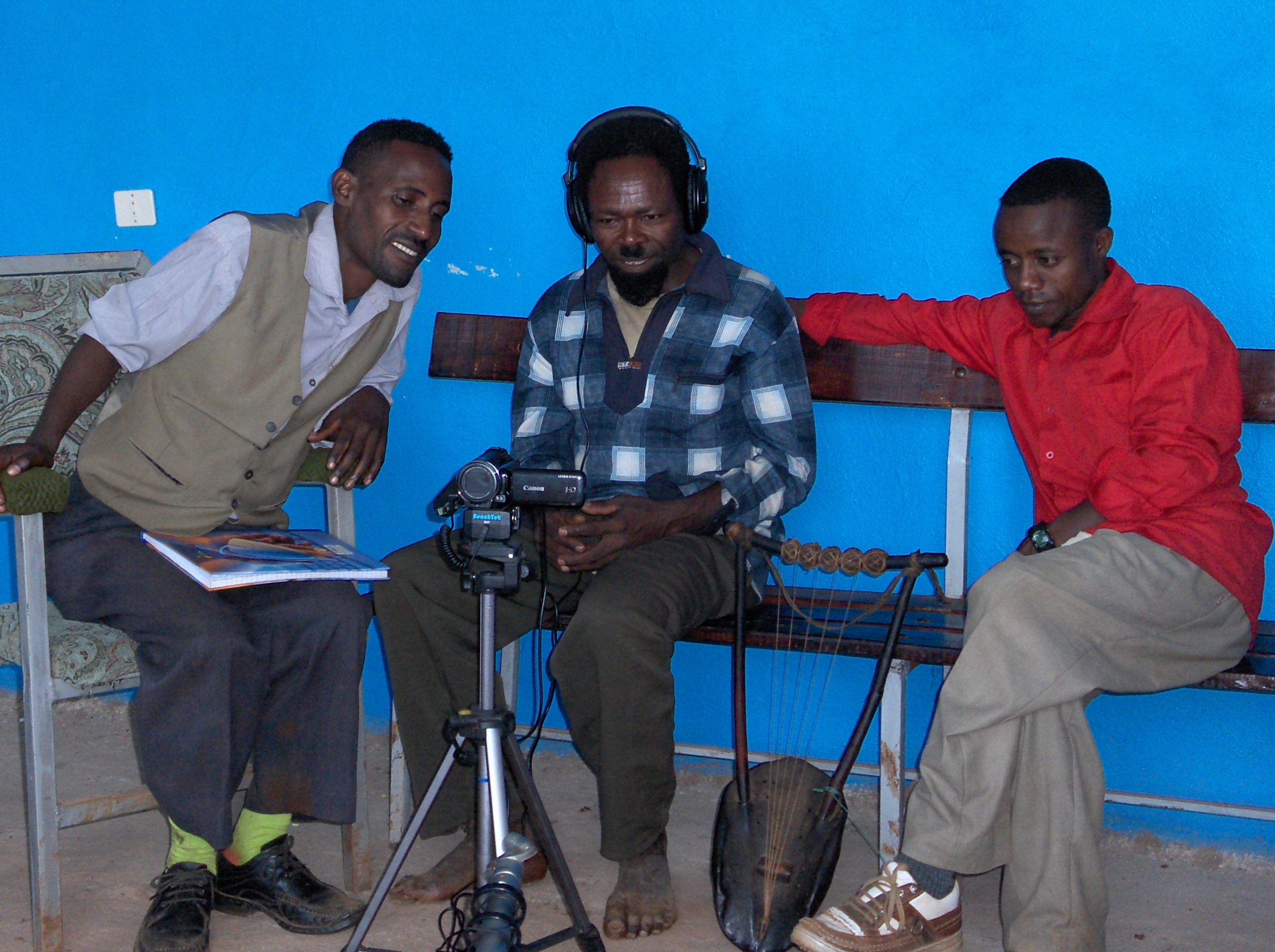 Baskeet, is an Omotic language spoken in south-western Ethiopia. This collection aims at investigating the variation and continuity in the songs and recitations of Baskeet singers based on a documentation of lyre and flute performances as well as wedding, mourning and work songs. The collection includes videos and audios from a wide range of singers and musicians and a corpus of interviews with musicians about their biographies, learning histories and repertoires as well as the contexts in which music is performed. The collection of music-/song-related recordings is supplemented by a corpus (non-musical) narratives and elicited language material (lexicon, paradigms, example sentences).

The data was collected by the linguist Yvonne Treis. During her documentary work she was supported by her local assistants Ambaye Tsedeke from Awra-Soosta, Seid Ali from Laska, Tamiru Admasu from Mandit, Tiyitu Taddese from Ganshire and Tarikwa Tapise from Laska.

The picture at the top shows the lyre and flute player Takkaale Buro (from Bonaara) watching the video of his interview that was conducted by the project assistants Ambaye Tsedeke (to the left) and Seid Ail (to the right).

In the last decades, the remote Baskeet area has undergone significant changes through infrastructure improvements, through the acquisition of a partly autonomous administrative status, through the designation of large resettlement schemes in the Baskeet lowlands for hundreds of people from overpopulated areas elsewhere in Ethiopia, through the accessibility of modern media, the increasing school attendance rates and, most importantly, through the rapid spread of Protestantism. The consequences of these changes do not affect all parts of the Baskeet language equally but they have dramatic effects on songs, verbal art and ceremonial speech. The majority of Baskeet have converted to Protestantism in the last decades and the numbers are rising continuously. Protestantisation has exacerbated the abandonment of elaborate mourning and wedding traditions. Protestantism is seen as incompatible with traditional culture and the performance of music and song. Music that is associated with non-Christian rituals or which does not worship the Christian God is outright forbidden or frowned upon (depending on the evangelical denomination). Therefore, knowledge of the religious and non-religious song traditions is on a steady decline, and Baskeet songs and music is nowadays only performed by a small minority that are resisting Protestantisation. The project worked with speakers (singers, musicians) of the Baskeet community who still performed vocal and/or instrumental music at mourning ceremonies, weddings, communal work or when herding the cattle. The project participants played the five-stringed lyre – the most widespread musical instrument in Baskeet –, the solo bamboo flute, the bamboo flute in a quintette, the bamboo trumpet in a trio, the bamboo pipe in a sextette, the tiny flute made from the neck of a calabash, the clay flute, the drum, or various mourning instruments made of wood or animal horns.

Baskeet – in the literature also known by the Amharic “Basketo” – is an Omotic language spoken by about 80,000 speakers (acc. to the 2007 census) in the linguistically heterogeneous Southern Region of Ethiopia. Most Baskeet live in the Basketo Special Woreda, some in the neighbouring Melokoza Woreda of the Gamo-Gofa Zone. Baskeet belongs to the Ometo branch of North Omotic and is hitherto little studied. The Baskeet-speaking area borders on Malo (North Omotic: Ometo) in the North, Dime (South Omotic) and the Bodi dialect of Me’en (Nilo-Saharan: Surmic) in the West, Galila Aari (South Omotic) in the South and Gofa (North Omotic: Ometo) in the East. The term Baskeet refer to the language, the ethnic group as well as the land.

This collection contains musical performances of male and female musicians from almost all communities of the Basketo Special Woreda and from members of many different clans (see the information on the individual participants), including a number of potter clans. Unfortunately, no recordings could be made with members of the smith clans – which is definitely a desideratum for any future research on Baskeet music.

The vast majority of recordings were staged by the principal investigator. Photos of most participants are accessible in the photo gallery.

The majority of bundles in this collection are audio recordings that can be broken down into different genres: songs and musical pieces, interviews with musicians, narratives (folktales), and elicitation (lexicon, paradigms, tonal minimal pairs, example sentences) of which the transcriptions and translations are successively added and updated. In addition, the collection contains 70 video recordings of lyre performances, interviews with musicians and demonstrations of lyre rhythms. There are also field notebooks, photos, maps, posters and publications archived in this collection.

Data for this collection was collected during two postdoctoral contracts of Yvonne Treis. In the first post-doctoral project at La Trobe University in Australia (2008-2011), she mainly collected folktales and other narratives, elicited grammatical and lexical data and recorded some musical performances. The core of the data for this collection of Baskeet song, verbal art and ceremonial language originates from the ELDP-sponsored postdoctoral research project (2011-2013) of Yvonne Treis at the research centre LLACAN (UMR 8135 du CNRS) in France. Between 2008 and 2013, Yvonne Treis spent altogether 15 months in the field.

For her recordings of Baskeet songs in December 2011 and January 2012 she visited almost all communities in the Basketo Special Woreda to find as many people as possible that still played the lyre or the flute and who still sang the wedding, mourning and work songs. In August 2012 she verified transcriptions with Baskeet speakers in Addis Ababa, Ethiopia’s capital. She returned to Baskeet in June 2013 to investigate tonological questions and to supplement her recordings of musical performances.

None of the data in this collection may be used as a legal argument or as evidence in court.

Users of any part of the collection should acknowledge Yvonne Treis as the principal investigator. Users should also acknowledge the Endangered Languages Documentation Programme as the funder of the project. Individual speakers and musicians whose words or music are used should be acknowledged by name. Any other contributor who has assisted in the collection, transcription and/or translation of the data should be acknowledged by name. All information on contributors is available in the metadata.