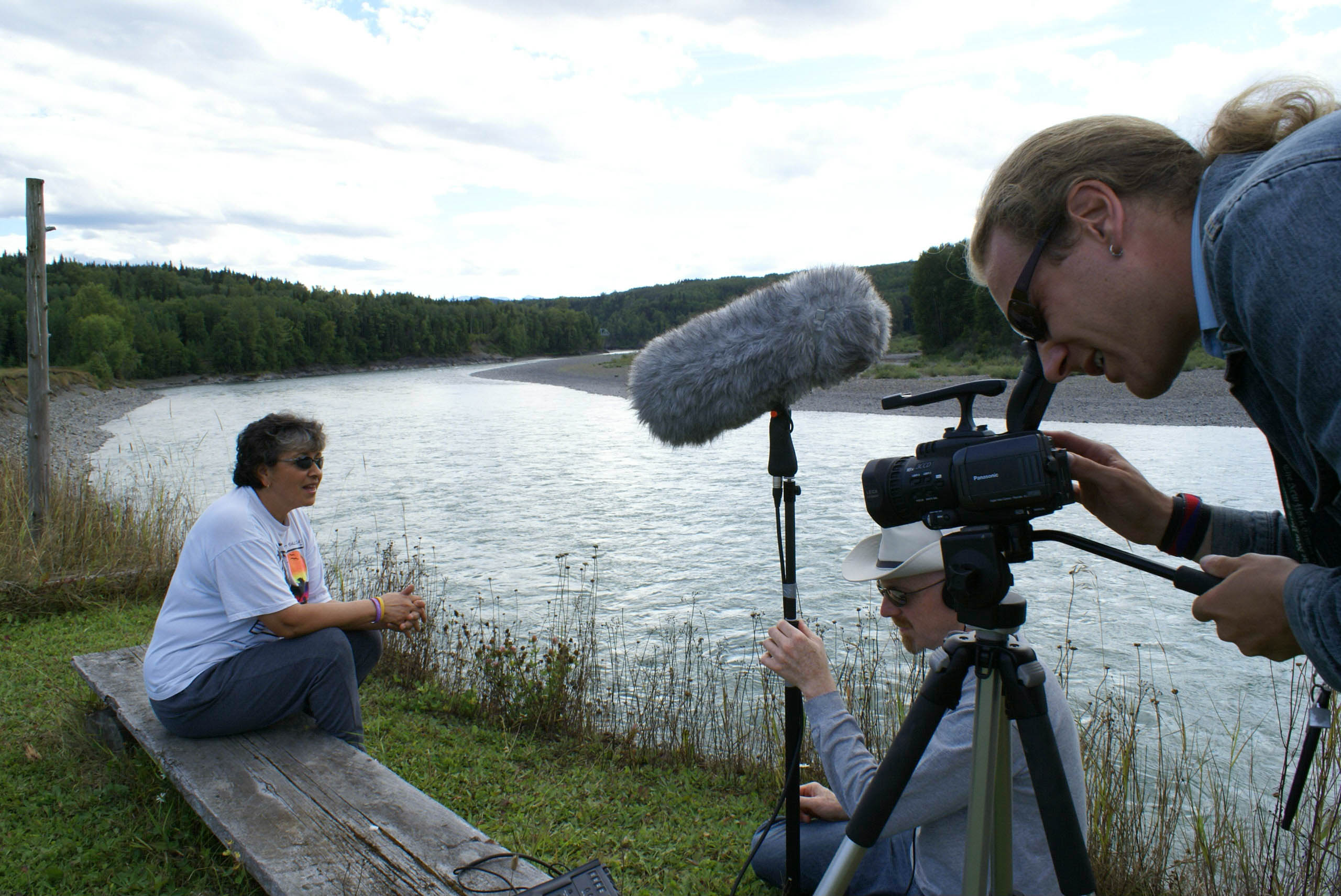 Gitksan is spoken in an number of communities along the Skeena river valley. This collection contains recordings from speakers in Kispiox, Gitanmaax (Hazelton), Kitsegukla, Kitwanga, Sik-e-Dakh (Glen Vowell), as well as two speakers living in Vancouver, BC. The core of this collection is a body of video, audio, text and photographic documents thematically centered on explanations of Gitksan cultural practices, personal anecdotes, and reflections on modern life. It also contains elicitation sessions investigating grammatical evidentiality and modality (reported in Peterson 2010).

The core team of this project was Tyler Peterson, linguist and principle investigator, John Wynne, sound artist and technician, and Denise Hawrysio, professional photographer. We were assisted by several members of the community in many ways, both logistically but also in terms of facilitating the interviews and working on the language transcriptions and translations.

The collection created with this project represents a cross-section of Gitksan communities (however, we should note that we do not claim to provide an equal representation), mostly focussing on the community of Kispiox.

Gitksan comprises of two major varieties, or dialect areas: Western Gitksan, Geets’imx̲ (‘downstream language’), and Eastern Gitksan, Gaanimx̲ (‘upstream language’). Western Gitksan is spoken in the settlements along the Skeena river, including the villages of Kitwanga (Gitwing̲ax ‘people of the place of rabbits’), and Kitseguecla (Gijigyukwhla ‘people of Jigyukwhla’, also the name of a nearby mountain), and also in the village of Kitwancool (Gitwinhlguu’l ‘people of the narrow place’), north of Kitwanga. Eastern Gitksan is spoken primarily in the settlements along the Kispiox river, in villages of Kispiox (Anspayaxw, ‘hiding place’), Glen Vowell (Sigit’ox̲, also the name of a nearby mountain), and Hazelton (Gitan’maaxs, ‘people of the place of torchlight fishing’), at the junction of the Skeena and Kispiox rivers. There are also two other main villages in northern Gitksan territory (upper Kispiox river watershed) that are no longer inhabited: Kisgegas (Gisg̲ag̲a’as ‘people of the place of small white gulls’) and Kuldo (or Gitg̲aldoo’o, ‘people of the wilderness or backwoods’). Variation between the two dialects is minimal, and consists mostly in phonological shifts and lexical differences (Brown 2008). While there are no exact or official figures, it is currently estimated that there are approximately 400 speakers of Gitksan, most of whom are over the age of 55. Although there are some teaching materials (Powell and Stevens 1977), as well as recent efforts to introduce the Gitksan language into the public school system, children are no longer acquiring the language. These facts place Gitksan on the list of the world’s many endangered languages (Peterson 2010).

Due to the culturally and personally private nature of these sessions, most of these recordings have restricted access. The stories, thoughts, and details shared by speakers of their traditional upbringing, Gitksan traditional laws, and reflections on everyday life – all in the Gitksan language – contribute to and enrich our understanding of the Gitksan language and people.

A unique outcome of this project, which was planned, is the creation of the sound installation Anspayaxw (the Gitksan name for the village Kispiox), by the sound artist John Wynne. The major underlying idea behind Anspayaxw is to explore how creative practices can shed different kinds of light on the issue of language endangerment, and the communities and individuals coping with this.

The majority of bundles in this collection are audio-video recordings. As a professional photographer was a part of this project, there is a substantial collection of photographs (2500), capturing the local natural and cultural environments, as well as people in their moving about their every day lives. We also took care, to ‘document the documentation’. As such, there are many photographs showing our interviewing techniques (e.g. camera and mic placements, seating arrangements, etc).

There are two major types of interviews: the majority of the recordings are free-form narratives (approximately 10 hours), and there are also several recordings of language elicitation, with a focus on investigating grammatical evidentiality and modality (approximately 3 hours).

The data for this project was collected in the summer of 2006. A supplemental trip was made in the early spring 2009.

Users of any part of the collection should acknowledge Tyler Peterson as the principle investigator and Tyler Peterson, Denise Hawrysio, and John Wynne as the data collectors. Users should also acknowledge the Endangered Languages Documentation Program as the funder of the project. Individual speakers whose words and/or images are used should be acknowledged by name, only after permission is received by these individuals to do so. Any other contributor who has collected, transcribed or translated the data, or was involved in any other way should be acknowledged by name. All information on contributors is available in the metadata.