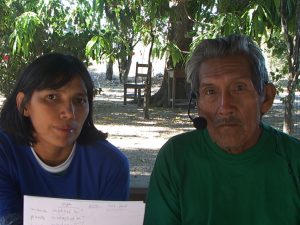 This collection contains documentation of five of the most urgently endangered native languages of Brazil, which are under-researched as of yet. These languages are: Mondé (currently known as Salamãy), Puruborá, Mekens (currently known as Sakurabiat), Ayuru (currenly known as Wayoro), and Xipaya. These five languages belong to the lesser-known branches of the Tupian family. Only two had received prior intensive research and none had adequate documentation available.

This collection was started with the following general objectives:

Due to the severe status of language endangerment of all five languages and to practical difficulties at the time of the project, the goals of the project were somewhat restricted. Nonetheless, the project produced a bulk of documentary material, mostly audio recordings, but also some video, specially for Puruborá and Mekens (Sakurabiat). The documentation corpus has served as basis for dictionaries and descriptive studies. Text collections and practical materials were also produced.

Mondé (ISO-639-3: mnd), currently known as Salamãy (ISO-639-3: mnd; glottocode: sala1273) is a language of the Mondé branch (Tupian familiy) spoken in the state of Rondônia, western Brazil. It has been referred to in the literature as Mondé language, however, that was the name of a person that was mistaken as the name of the group. As of 2021, the language is remembered by only two elderly women, who recall mostly the name of concrete things. Alternate names include: Salamãi, Salamaikã, Sanamaica, Sanamaiká, Sanamaykã. Inside the Mondé branch, Salamãy is approximately midway between  the language (four dialects) of the Gavião, Zoró, Aruá and Cinta Largaand the language of the Paiter(Suruí of Rondônia.

Puruborá (ISO-639-3: pur; glottocode puru1264) is spoken around the headwaters of the Rio São Miguel, in the state of Rondônia, in western Brazil. It has also been referred to in the literature as Burubora and Pumbora. From 2000-2021, many elderly speakers passed away. There is currently, one elderly speaker of the language, and two young teachers who have learned it through the documentation material produced by this project. Currently the language is been taught at the indigenous school. There is as process of revitalization in course led by the Puruborá themselves.

Mekens (ISO-639-3: skf), self-identified as Sakurabiat (ISO-639-3: skf; glottocode: saki1248), is a language of the Tupari branch (Tupian Family), spoken in the state of Rondônia, western Brazil. At the time of the project, there was an estimate of 20-70 speakers. However, from 2006-2021, several Sakurabiat people passed away. There are currently only 9 fluent speakers and about the same number of semi-speakers, all adults over 30 years old. Alternate names include: Mekém, Mekens, Sakirabiák, Sakirabiáp, Sakirabiát, Sakirap, Sakiriabar, and Sakyrabiar.

Ayuru is currently known as Wayoro (ISO-639-3: wyr; glottocode: wayo1238), and it is another severely endangered language of the Tupari  branch (Tupian Family). At the time of the project, there was an estimate of 8-77 speakers, living along the Guaporé river. In a survey in 2010 there were found 10 full speakers. However, based on first-hand information, there is currently, as of 2021, only two fluent speakers and 11 semi-speakers of the language. Alternate names include: Wayoro, Ajuru, Wayuru, Ayurú, Ajurú, Wajurú, Wayurú.

Xipaya (ISO-639-3: xiy; glottocode: xipa1240) it is a language of the Juruna branch (Tupian Family). At the time of the project it was spoken by an estimated 2 elderly people in Pará, out of a reported ethnic population of 600. They traditionally lived along the Xingu River. It is currently considered a dormant language. Alternate names: Shipaja, Xipaia.

An ethnographic consultant helped collect cultural information. The project included four languages spoken in the same state of Rondônia, western Brazil, and one language spoken in the state of Pará, in the Northern region of Brazil. The five languages belong to four Tupian branches with relatively few studies. So the results of the documentation, in spite of the small number of speakers, have been very important for diachronic studies of the Tupi family, as well as for the communities.