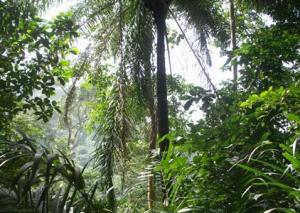 This is a collection of video recordings of speakers of Ikpána describing the names and usages of various plants found in the Logba Traditional Area, Ghana. All recordings were made during twelve days of fieldwork in November 2009 as part of an Independent Study Project during Lydia Green’s undergraduate semester abroad.

The work was supervised by Dr. Kofi Dorvlo and Prof. Mary Esther Kropp Dakubu, both at the University of Ghana, Legon.

The academic outputs of the documentation were a 53-page preliminary analysis of the linguistic properties of plant names in Ikpána, which also investigates lexical borrowing in the botanical domain, and the 49-page appendix to the linguistic analysis listing the plants’ names, their usages, and information linking each entry to the video recordings. This information is under higher access restrictions in keeping with the community’s wishes to ensure that their medicinal knowledge is not accessed without their permission.

Ikpána is a Kwa language of the Niger-Congo language family spoken by fewer than 10,000 people in the mountains of Ghana’s Volta Region. It is one of the fourteen languages sometimes referred to as the Ghana-Togo Mountain (GTM) languages. The language is still being learned by children but is under pressure from dominant languages, such as Ewe, which is the regional lingua franca, and English, which is the official language of the country.

A Grammar of Logba (Ikpana), a grammatical description of the language, was published by Dr. Kofi Dorvlo in 2008. He is currently working on a trilingual Ikpána-English-Ewe dictionary. Other previous work on the language consists of a sketch grammar done in German by Westermann from 1903 and several short papers by Dr. Dorvlo.

When citing the final essay or the appendix, please use a form of the following recommended citation:

Due to concerns of biopiracy, many of the materials have high access restrictions. In order to request access to such materials, please contact both the depositor (Lydia Green) and the delegate (Unansanango Togbega Dabra VI) for permission.