Stories from the Saltwater as told by the old Marra ladies 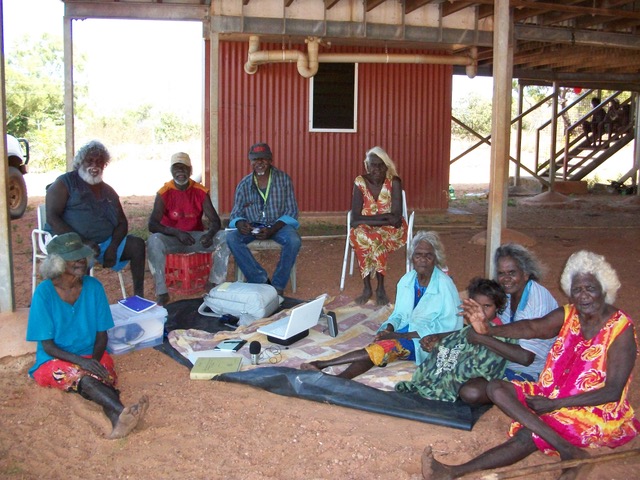 Landing page image for the collection ’Stories from the Saltwater as told by the old Marra ladies’. Click on image to access collection.

Marra language and land is situated on a coastal strip on the Gulf of Carpentaria in Northern Australia, centred around the Limmen Bight District. This project focused on a group of 6-7 elderly, fully-fluent Marra speakers who were the last who grew up on their traditional country with little contact with Europeans. Other Marra people who grew up in missions and stations did not acquire Marra to full fluency. The speakers involved in this project lived in Ngukurr and Numbulwar. All but one passed away within a decade of the project.

This project took place over a period of two years (2010-2012), led by Greg Dickson, a PhD student with several years of prior history working with the community. Greg worked across Ngukurr and Numbulwar to record a variety of audio recordings with Marra speakers. Recordings range from short traditional stories, oral histories, conversational group recordings involving up to five speakers as well as sessions where elders reviewed and informed or translated/transcribed archival recordings. Other languages occasionally feature: primarily Nunggubuyu (Wubuy). A number of recordings are transcribed and translated into Kriol (the local lingua franca). A smaller selection are also glossed and translated into English.

Marra people, as mentioned above, have their traditional homeland in the Limmen Bight River disctrict of the Northern Territory, Australia. The elders who contributed Marra recordings to this project all grew up in this area with little contact with Europeans in their early lives. Other Marra people had shifted to missions and cattle stations that were set up outside of Marra lands. The maintenance and transmission of Marra appears to have ceased after Marra people stopped living on their own country and so the group feature in these recordings probably represent the last fully fluent speakers on Marra. Some younger people have good passive knowledge, however the ability to converse for extended period in Marra and tell extended narratives is unique to the 6-7 elders features in these recordings. The group all speak the same variety of Marra. Dialectal variation was not a feature of this project, nor was it described as a strong feature of Marra in previous linguistic documentation. The elders speaking on these recordings are from two communities. The elders from Numbulwar are three sisters and their younger brother. The other two elders featured on many recordings are from Ngukurr community, but from different families and so at the time of the project, did no longer regularly speak Marra. One of those elders, Freda Roberts, was particularly helpful with transcribing and translating recordings, alongside Betty Roberts, another elder from Ngukurr who was a strong Marra speaker but not fully-fluent like the others.

Marra is a non-Pama-Nyungan language (i.e. not part of the largest language family found in Australia) and belongs to a small family of languages of only 2-3 other languages (Alawa and possibly Warndarrang). At the time of this project, only around seven fully fluent speakers of Marra were alive, living in remote communities of Ngukurr and Numbulwar in Arnhem Land, Northern Territory. The last Marra speakers are the last Marra people to have grown up on their own traditional country, rather than in missions, stations and towns. Marra people who grew up in missions, stations and towns never learned their language to full fluency and so intergenerational transmission was irreversibly severed. By 2019, only one of those elderly Marra speakers is still with us.

The bulk of this collection consists of audio recordings. Over 27 hours of audio recordings were created in this project: around one third was recorded in Ngukurr and two-thirds in Numbulwar. Around 11 hours are recordings of Marra elders listening over older archived recordings and adding more information and commentary. Around 2.5 hours is oral histories, sometimes told individually and sometimes told in more collective contexts during group recordings. Few recordings feature only one speaker (all of those were recorded in Ngukurr). Most recordings include some or a lot conversational data and often include code-switching to Kriol.

Recordings were made between 2010 and 2012. Almost all existing transcriptions and Kriol translations were done in the field between 2010-2013 with Greg Dickson working alongside community members, primarily Freda Roberts and Betty Roberts.

This project fed into Greg Dickson’s postdoctoral research which looked at language shift from Marra to Kriol. He went on to complete his PhD in 2015 which can be accessed here: https://www.academia.edu/13834492/Marra_and_Kriol_the_loss_and_maintenance_of_knowledge_across_a_language_shift_boundary_2015_PhD_thesis_

Another key purpose of the project was to address a community-identified need to document Marra and so recordings were also been deposited locally at the Ngukurr Art Centre and the Ngukurr Language Centre at the time of the project.

This project led to further community benefits: it helped to consolidate community support for an independent community language centre, which was established in 2011 and funded in 2012. The Ngukurr Language Centre continues to operate and remains a valuable community organisation supporting at least five local endangered languages.

Arts projects also fed into this project: most notably the award-winning online interactive documentary, My Grandmother’s Lingo which can be viewed here: https://www.sbs.com.au/mygrandmotherslingo/

Users of any part of the collection should acknowledge Greg Dickson as the principal investigator, the data collector and the researcher. Users should also acknowledge the Endangered Languages Documentation Programme (ELDP) as the funder of the project. Individual speakers whose words and/or images are used should be acknowledged by respective name(s). Any other contributor who has collected, transcribed or translated the data or was involved in any other way should be acknowledged by name. All information on contributors is available in the metadata.