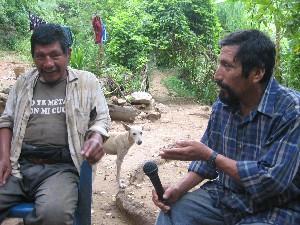 Landing page image for the collection “Documentation of Zenzontepec Chatino Language and Culture”. Click on image to access collection.

This project produced transcribed and analyzed texts from Zenzontepec Chatino (CZN), the most divergent Chatino language (Otomanguean), spoken in the southern Sierra Madre of Oaxaca, Mexico (16°32″N, 97°30″W). There are about 8,000 speakers, but communities are shifting to Spanish. The corpus will document naturally occurring narrative, dialogue, ritual speech, traditional medicine, ethnobiological information, and geographic knowledge. The texts are the basis of a descriptive grammar, augment a tri-lingual dictionary in progress, and are to be shared with the community in printed booklets, CDs, and through archival. Native speakers will be trained in documentation methods and transcription.

The Chatino people of Santa Cruz Zenzontepec, an indigenous community in the Southern Sierra Madre mountains of Oaxaca State, Mexico.

Zenzontepec Chatino (ISO 639-3 czn), is referred to as tsá’ jnyá in the language itself. Chatino is a group of languages of the Zapotecan language family of the Otomanguean stock.

As Chatino is a tonal language, the following characters have been used to indicate phonetic qualities:

The primary content of the corpus is a collection of audio recordings of naturalistic speech of a wide range of genres, including but not limited to: folk tales; traditional beliefs; dialogue; advice giving; personal narrative; history; and description of local geography, agricultural practices, religion, traditional medicine, the indigenous political system, norms of social interaction, family values, crafts, and music. Many texts contain social commentary and reflections on how the language, culture, and biodiversity of the region are threatened and changing. Many recordings also contain metadocumentary recountings of the trajectory of the language documentation project from a native speaker documenter’s perspective. Aside from naturalistic texts, the deposit includes some recordings of elicitation sessions geared toward particular grammatical topics or example sentences that illustrate the meaning and usage of vocabulary, most of which were not elicited but spontaneously offered by a native speaker. The majority of the audio resources are accompanied by transcriptions with free translations in Spanish, and some of the resources are accompanied by photographs of the events and the participants in them.

This project was carried out alongside Anthony Woodbury’s Documentation of Chatino. As a result, there is some overlap with materials deposited in Anthony Woodbury’s deposit (http://hdl.handle.net/2196/00-0000-0000-0001-BBFF-F). This deposit contains consistent and rich metadata, as well as detailed transcription files which were not available in previous versions.

As is also the case with some materials in Woodbury’s Documentation of Chatino corpus, some of the recordings are already in AILLA – The Archive of the Indigenous Languages of Latin America, University of Texas at Austin, TX, USA. The time span covered by the materials is June 2007-April 2012.