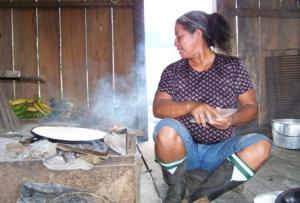 Ecuadorian Siona [snn] is a severely endangered language that has less than 200 speakers. It is spoken in six communities in the Cuyabeno reserve and on the banks of the Aguarico in Eastern Ecuador (Lat.: -0.089607, Long.: -76.141434). Even within the under-documented Western-Tukanoan branch of the Tukanoan family, there is little existing documentation on Ecuadorian Siona, a gap that this collection is expected to address. The corpus contains various genres, ranging from life stories traditional stories to conversations and it has a special focus on the documentation of the expression of evidentiality in the language.

This collection is the result of the HRELP project Documenting and Describing Ecuadorian Siona.

The materials gathered in the period from 2010 – 2011 consist of narratives and conversations that provide interesting insights in the use of reportative evidential, assertive and interrogative morphology. The data shows that reportative, assertive and interrogative morphology is mutually exclusive. Reportative forms are mostly used in traditional stories and assertive forms are mostly use in personal narratives. The recordings also show the use of many other types of complex verb morphology.

The recording session entitled “The one from the forest” is of particular interest as it contains important switches between reportative and assertive morphology showing that the speaker witnessed some of the events and learned about the other events through someone else.

The audio recordings and pictures collected 2010-2011 contain important cultural and historical information about the Ecuadorian Siona people. The collection contains some information about the history of the Siona villages, their way of life, modern agricultural practices, and the medicinal use of some plants.

The recordings collected in September 2012 were made in order to conduct a phonetic and phonological analysis of Siona verbs and nouns. The verbs and nouns were mostly recorded in small sentences. The recordings contain features such as the preaspiration and laryngealization of consonants and the nasal harmony.

The materials consist of 64 bundles of documentation sessions each of which have been transcribed and translated into Spanish and English. There is an additional bundle containing pictures. The collection also contains a description of the orthographies used in the documentation and as well as a story booklet which was produced with the help of the HRELP funding.

The documentation session bundles collected in the period between June 2010 and August 2011 contains narratives and conversations. The narratives include various genres such as traditional stories, descriptions of local events and local narrative-history. The documentation sessions collected in September 2012 contain elicited sentences that can be used for phonological and phonetic analysis of Ecuadorian Siona.

In addition to the collection, extensive metadata has been included which describes the genre, topics, content, and context of the bundles. The metadata also includes the sociolinguistic background of the involved speakers.

All the audio recordings are in .WAV format, the trascriptions were done in ELAN. The orthography and the storybook are in .pdf format. The pictures are in a .jpg format.