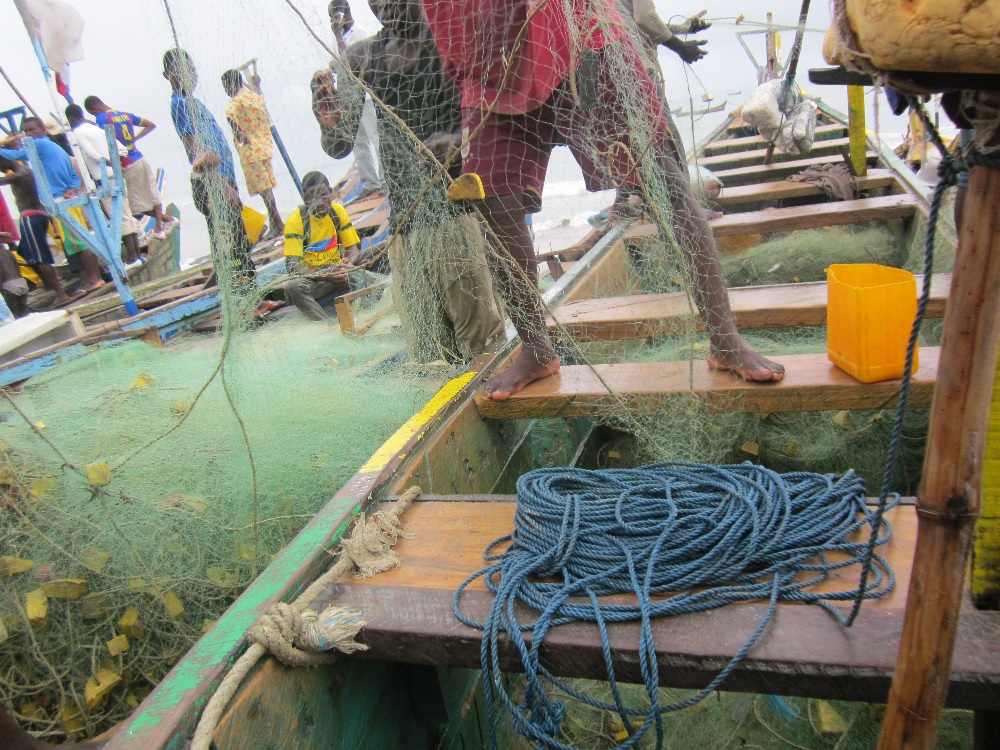 Items of this collection include audio recordings, video recordings, still photos and texts from fieldwork of a language documentation project of Simpa or Efutu, spoken in a fishing community in Winneba in the central region of Ghana. Some of the videos come with their accompanying audio version (whereas others are video only or audio only). Some of the audios come with an accompanying transcription in ELAN. Types of data in the video and audio recordings may be categorised into (i) interviews, (ii) prompted narratives (a form of staged events), (iii) elicitations, and (iv) natural (speech) events or observed communicative events (Lupke 2009) or observable linguistic behaviour (Himmelmann 2006). Most of the video recordings of naturally occurring events contain fishing activities, such as fish cleaning, fish smoking, fish selling, making and mending of fishing nets, launching and docking of fishing boats, and painting and mending of fishing boats. Other video recordings contain prompted narratives of fishing activities and festival celebration activities. The audio recordings contain data, such as prompted narratives, natural conversations, folk songs, narration of fables, elicitations, interviews and recorded FM radio programmes. The still photos include images of fish species, crabs, fishing boats, fishing nets, other fishing equipment, some places in and around Winneba and some people involved in the language documentation fieldwork.

The Simpa or Efutu speakers belong to the Guan ethnic group of Ghana. They live in Winneba, a coastal town. They are sometimes referred to as ‘coastal Guans’. They are considered to be a minority group because of their population and the status of their language in Ghana, as explained below in subsequent sections. They are mostly fisher folks: the men are fishermen while the women sell fish, either fresh, or preserved into smoked or salted-and-fermented or dried. They are bilingual in Fante, a dominant language in the Efutu speech community which is spoken as a second language by the Efutu speakers. They are mostly traditionalists and observe several traditional festivals, with the Aboakyer Festival being the most prominent one patronized by many people from within and outside Ghana. Some of them however practice Christianity.

Effutu, or Efutu, is one of three dialects of Awutu (ISO 639-3: awu), spoken in the Coastal Region of Ghana.

In Winneba, Efutu is spoken in only parts of the town, namely, the areas closed to the sea where the fishermen and their families live. Fante is the main language spoken in the inland parts of Winneba. Efutu or Simpa could be described as a minority language in Ghana: it has fewer number of speakers compared with other languages in the country. It is under-described, under-studied, and somehow threatened, especially because educated speakers have negative attitude towards their language, they see it as less prestigious. It is not used in some domains in its speech community (see Agyeman, 2013). Speakers also speak a more dominant language, Fante, as second language. In schools, Efutu is prohibited and children are only allowed to speak the dominant language Fante and the official language English at all times in school. The prohibition is enforced through various forms of punishment.

Some characteristics of Efutu include the following:

it is a tone language

it has vowel harmony

it has oral and nasal vowels

it has an elaborate tense, aspect, mood and negation system

it has serial verb construction

it has no prepositions but postpositions

it has subject agreement markers

The primary objective of the projects is to document the language to collection the material in archive and use it for a descriptive grammar.

Any individual speakers whose words are used should also be acknowledged accordingly.