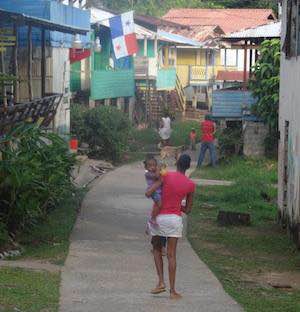 Landing page image for the collection ’Tense, Aspect, and Modality in Bastimentos Creole English’. Click on image to access collection.

This collection aims to include a rich set of digitally recorded speech acts (audio and video), as well as texts and stills, reflecting sociocultural life typical of the 600 speakers of the Creole community of Bastimentos Island, Panama, Central America, whilst on the other hand, to provide a sketch grammar with an in-depth descriptive analysis of TMA markers and their permissible combinations, accounting for syntactic variables, sociolinguistic variation, pragmatic/stylistic information, and possible internal change independent of the creole continuum.

The first Antilleans to arrive in Bocas del Toro were slaves of English-speaking colonists from San Andrés and Providence Island in the early nineteenth century (Westerman 1980 & Herzfeld 1983; cited in Aceto 1998: 31). A second wave of immigrants later in the century and into the following century came from Jamaica and Barbados in order to work on the railroad canal (Holm 1989: 482) and banana plantations (Aceto 1996: 48). Today the island is inhabited by approximately 1,000 people, 600 of whom are descendents of the West Indies, and four hundred of whom are indigenous speakers of Guaymi/Ngabere (Aceto 1996: 48). The two ethnic groups live on separate parts of the island and communicate with each other in Spanish, the official language of Panama (Aceto 1998: 32). The native language of the creole community is not acknowledged in the local primary school. Although Bastimentos Creole speakers have little, if any, knowledge of Spanish when they begin school, as adults they become bilingual to varying degrees (Snow 2003:300). The role of Spanish is reserved for formal occasions and Bastimentos Creole for ordinary conversation (Snow 2000: 168).

Bastimentos Creole shows wide variation in pronunciation, grammar, and vocabulary, also borrowing many Spanish lexical items (Snow 2000: 167). There remains, nevertheless, a stable diglossic relationship between Bastimentos Creole and Spanish. Snow (2000:168) believes a gradual shift towards Spanish is unlikely and at the same time the fact that Spanish is the contact language, and not English, limits the effects of decreolization. Recently, however, the island has begun to attract mostly English-speaking tourists. Prior to 1995, outsiders and visitors were mostly monolingual Spanish speakers and access to television broadcasts was restricted to Spanish (Aceto 2001: 6). English speakers occasionally visited from the USA, e.g. extended family members (Aceto p.c). Conversely, as the economy of the province increases its reliance on international tourism, Bastimentos Creole speakers are now conversing in some variety of English with tourists (Snow 2003: 299-300). This new sociolinguistics situation could potentially have a significant impact on language maintenance and language change (Snow 2003:8).

Snow (2007, 2003, 2000a, 2000b), rather than describing in any detail the grammar of Bastimentos Creole, observes the general linguistic situation of the community of Bastimentos Creole speakers. Aceto (2001/5, 1999, 1998, 1996, 1995) on the other hand, has published several articles (based on his PhD thesis), which explores variation in the past and future preverbal markers. My own MA dissertation, ‘A Grammatical Description of Bastimentos Creole English’, was made possible thanks to Aceto, who kindly sent me his recordings of Bastimentos Creole made in 1994.

The TMA markers take the syntactic form of preverbal particles in basilectal Bastimentos Creole, a typical order in SVO languages (Dryer 2007: 90 & 107), and prove to be of significant typological interest.

The recordings I received from Aceto were made between the months of March and June 1994. During this period Aceto collaborated with approximately 20 speakers of different genders and age groups (Aceto, p.c., 2011), conducting a series of elicitation sessions based on paradigms in Winford (1993: 87-208), and which feature Guyanese Creole and Jamaican Creole.
The core of the materials in the collection were gathered during my PhD field research as part of my ELDP Small Grant between 2012 and 2013.