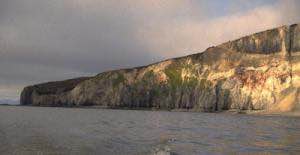 Landing page image for the collection ’Koryak Ethnopoetics: Stories from Herders and Maritime Villagers’. Click on image to access collection.

This collection contains documentation on two varieties of Koryak in Kamchatka, Russia, ignored by contemporary linguists. We capture a variety of genres, including conversation, songs, riddles & sayings, and descriptions of ritual and cosmology, but most of the material will be narratives. Transcriptions include grammatical and ethnographic annotations for each genre, and we aim to analyze all of the narratives following Dell Hymes’s method of ‘measured verse’, demonstrating the value of taking such analysis to a wide array of narratives, from myth to oral history to other kinds of stories.

Reindeer herding people are also known as Chauchu. The Srednie Pakhachi Koryak speakers are ethnically Chukchi. Maritime Koryaks on Penzhina Bay are often called and call themselves Nymylan, from the Koryak word for “villager.”

There is clearly a sense of urgency among speakers of all varieties of Koryak, given that the language is not continuing among the youth. There are dozens of people famous as good storytellers and dozens more who would be enthusiastic about participating in staged conversations in order to provide material for documentation. This project is driven by the needs and desires of indigenous Kamchatkans.

The collection is embedded in a theoretical context derived from the fundamentals of linguistic anthropology, which was consolidated in the 1960s and 70s as a subdiscipline based upon the Boasian School. It is primarily concerned with the contextualisation of text. The meaning and consequences of a speech act or speech event are emergent in three sets of dualities: text & context, form & meaning, performance & competence.

Ethnopoetic analysis requires learning the grammatical structures in order to carry out the necessary close reading of the text. The “output” is text formatted on a page that looks like poetry–high art. Franz Boas foreshadowed this connection, and his descriptive linguistics was connected to work in folklore and literature. Hymes and others called for closer attention to quality translations across several frames simultaneously: from one lexico-grammatical frame to another, from one cultural context to another, from speech to writing. Ethnopoetic analysis is as much political as theoretical, for taking oral narratives of Koryaks as serious art is a profound political stance that cannot be overestimated in its importance to Koryaks and others in Kamchatka.

Koryak is severely endangered, and when one acknowledges the widespread variation hidden in the usual statistics of speakers of the ‘language,’ the need is even more urgent to document speech without children acquirers. The dialectal variations of Koryak are intertwined with Alutor. For many years, Soviet (Russian) linguists followed the dialectal breakdown provided by Stebnitskiy (2000:33) in the 1930s: Chavchuven (pop. 3,500), Alutor (1,900), Palana (750), Kamen (550), Karaga (300), Apuka (300), Paren (150), Itkana (100).

A ninth group, Kerek, was identified as a different language, nearly as distinct from Koryak as Koryak is from Chukchi. Zhukova (1968) argued that Alutor was a language separate from Koryak. Alutor is clearly more similar to Palana and Karaga than they are to Chavchuven (Chawchu), so those variants are classed as dialects of Alutor, although many linguists agree that it may be better to speak of a Nymylan language (autonym meaning ‘villager’) with Alutor, Karaga and Lesnaya/Palana as its three principal dialects. From Fortescue’s Chukotko-Kamchatkan Dictionary, one gets the impression that Koryak is the language of Chawchu reindeer herders living in the interior lands of the Penzhina River basin and northern Kamchatka along with dialects of the coastal villages of Apuka, Kamen, Paren, and Itkana. While the Chawchu Koryak is reasonably well documented through the publication of books, newspapers, radio and TV broadcasts, grammars, dictionaries and school textbooks, the variants of these four villages are very poorly documented.

Local terminology classes the people of these villages as “Nymylans” for they are culturally distinct from the nomadic reindeer herding Chaw-chu. The distinctiveness of their language from Chawchu is an open question requiring further documentation. They may be best classed as Koryak, or with Alutor, or perhaps separated as yet another language “Penzhina Nymylan.”

To complicate things further, the language of Chawchu herders is not the same everywhere. The villages of Middle Pakhachi and Achavayam in the north-east are famous for their conservative ethos and their ethnic identity as Chukchi. It is clear these two villages speak a variant of Chawchu Koryak and not Chukchi. Still, the language of these villages is clearly different from the “Standard Koryak” found in local media, most notably by use of /dz/ instead of /j/, as in dzadzanga (house) vs. Standard Koryak yayanga or Chukchi yaranga.

The sociolinguistic reality of Chawchu is that it is not a single speech community, but rather is found in a half-dozen multilingual small villages of a 500-700 people each, sparsely dotting an area larger than all of Great Britain. Pakhachi and Achavayam are closely connected through kinship networks and regular travel. The total population of these two villages has fewer than 150 fully fluent speakers. There may be a dozen children learning the language, but schools have a habit of shifting fully fluent 7-year-olds to monolingual Russian speakers.

Stebnitskiy’s Kamen refers to a village that no longer exists. Nearby is the contemporary village of Manily, to which were relocated not only Kamen residents, but also residents of several other small villages that dotted the shore of northern Penzhina Bay. The Paren variant is certainly moribund. I found absolutely no children with any conversational ability in Paren while I lived there for nearly two months in 1998 while conducting ethnographic research. No one born after 1980 claimed to be a full speaker. I do not know of anyone born after 1990 who has any competence in the Kamen (Manily) variant. Vakhtin (2000:127ff.) claims in his book that his surveys found no children or teens speaking Koryak.

The documentation of naturally occurring speech has been limited to myths and other stories, elicited forms, and word lists (Bogoras 1917, 1922; Zhukova 1980, 1988; Kibrik et al. 2004; Aiatginina & Kurebito 2006). This will be the first publicly available multimedia archive. Publications by Kibrik, Kurebito and Nagayama are all based on recordings, but the recordings are not publicly available. The documentation of Paren is limited to Bogoras. Alex King completed transcriptions of 6 wax-cylinder recordings made by Bogoras and that material will be included in this documentation project along with a few hours of other archival recordings from the 1970s, 80s and 90s.

The project has the following goals: