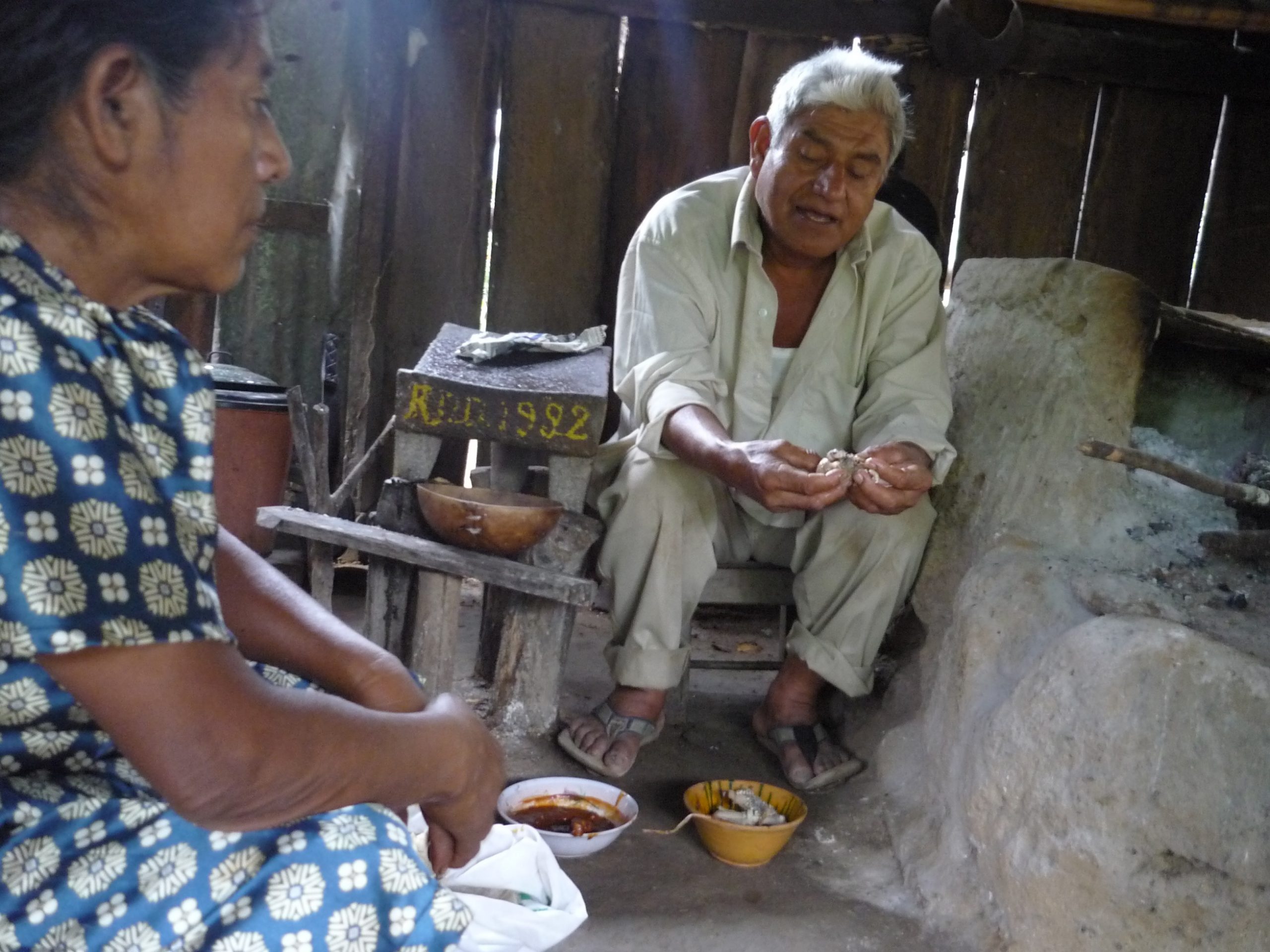 This collection is the outcome of a language documentation project to document the San Bartolomé Loxicha variety of Miahuatec Zapotec. The collection contains digital video recordings with multiple speakers on a variety of subjects and in different contexts (at home, in the fields, the forest, etc.). The recordings were transcribed, annotated and analysed and information from the transcriptions was used for a grammar and dictionary. All materials for which consultants have given consent are available at ELAR and AILLA. Additionally, a project webpage will be created for the speech community and the public at large.

This collection represents members of the Miahuatec Zapotec-speaking community, particularly the people of San Bartolomé Loxicha, whose speech is linguistically more conservative than the neighbouring variety of Miahuatec spoken in San Agustín Loxicha and other nearby towns.

The community lives in the Loxicha region in the highlands of the Sierra Madre del Sur, near the Pacific coast of the state of Oaxaca, Mexico. Oaxaca is the most linguistically and ethnically diverse state in Mexico, and mountain communities are often culturally conservative, as is this one. According to 2005 census data, 1853 people out of a population of 2617 in this municipality speak an indigenous language, and we can assume that all these people speak Zapotec.

Much of the pre-colonial history of the region is unknown, and documenting languages is one way of piecing together the unwritten history of the region. According to early colonial-era historical documents, there once was a ruler in Miahuatlán named Pichina Vedella. Upon his death his subjects divided into two groups, one for each of his sons. One group remained in Miahuatlán and the other set out to conquer the then Chontal-occupied Ozolotepec region. This purportedly took place in the fifteenth century CE. Following the arrival of the Spanish invaders, there were epidemics and for a few decades concentration camps. The aftermath saw on the one hand a return to previously populated areas and on the other migrations into new areas which had opened up due to the loss of the original populations. Some of the towns today known as the Loxichas, including San Baltazar, were already home to Coatec Zapotec speakers. Others, including San Bartolomé and San Agustín, received an influx of Miahuatec-speaking Zapotec peoples who created new communities in the region and continued to receive other Miahuatec-speaking immigrants up through the twentieth century. The previous occupants of this part of the region could have been Chatinos, Pochutec Nahuas, Chontales or other Zapotecs.

The Zapotec-speaking people who live in the Loxichas are divided into two groups, which they are born into and are allowed to convert from one to the other prior to marriage. One group, called xa’yint (literally ‘Indian people’), are traditionalists who sacrifice turkeys and make pilgrimages to sacred springs for certain rituals and the other group, called xa’xtiíl (literally ‘Hispanic people’), have parallel rituals that have been more adapted to Catholicism and involve offerings of candles and incense in the church. In the Loxichas the Mesoamerican 260-day ritual calendar survives and prescribes auspicious days to carry out certain rituals.

There is linguistic and cultural shift going on in the community. Miahuatec Zapotec of San Bartolomé Loxicha is only spoken in this one town, one of the smaller towns in the region. While there are only some adults who do not speak Zapotec, there is a much larger percentage of children who do not speak Zapotec. The domain in which the language is used is also shrinking. Most residents speak to each other in Zapotec most of the time. Spanish, however, is used for the daily (and sometimes hourly) public announcements made on a loudspeaker, for official business between citizens and town officials, for public education, for religious ceremonies and rituals taking place in a church (although more traditional rites which take place in the home, field, and sacred sites around the community are performed in Zapotec), and for communication when monolingual Spanish speakers are present.

The cultural situation mirrors the linguistic one. For example, this is one of only a few communities in Mesoamerica where the use of the 260-day ritual calendar persists, however its use has severely declined in the last two decades. Elaborate rituals involving sacrifices to Lightning must be performed on given days in the calendar and during these ceremonies prayers are said in Zapotec, in the Mesoamerican poetic style which makes heavy use of semantic couplets. These rituals and prayers are still known but are quickly fading out of practice.

The language and culture shift is also the outcome of larger issues in the society. There is outward migration due to the lack of resources available locally. Communities do not have adequate medical supplies or personnel. One of the grantees associated with this deposit, Emiliano Cruz Santiago, died for this very reason when he suffered a medical emergency in the Loxichas and was not able to get the medical care that would have saved his life and which is readily available in urban areas of Mexico. In addition, since around 2014 violence from organized crime is an increasing problem in San Bartolomé Loxicha, forcing many residents from their homes. As families relocate to Puerto Escondido, Oaxaca, and elsewhere, the children who could be the language’s future are being removed from the environment where the language is the most vibrant and are being placed in a Spanish-dominant environment, where they only hear the language in their own family home and not out in public.

“Southern Zapotec” or “Southern Sierra Zapotec”, is made up of around seven different mutually unintelligible languages. Their classification is still being determined. The larger group may consist of four different subgroups that are no more closely related to each other than they are to the Zapotec languages of more distant parts of Oaxaca and Veracruz. Two of these subgroups, Coatecan and Miahuatecan, exist side by side in the Loxicha region in the pre-coastal mountains of the Pochutla district.

Typologically, Zapotec languages are of interest for factors including VSO order and complex suprasegmental systems. Miahuatec is different from other Zapotec languages in having special uses for classifiers, different processes of tone sandhi, and historical changes to its tone inventory, which are furthering the study of historical Zapotec tone, and how tone languages change over time.

The name Miahuatec Zapotec goes back to the language origins in and around the city of Miahuatlán (Guézdo’) some centuries ago. The Zapotec name of the language in this variety is dí’zdéh. Dí’z means ‘word’ or ‘language’ and déh is an ethnonym meaning ‘Zapotec’. Though this ethnonym is sometimes etymologized as ‘cloud’, hence ‘the cloud people’ and the ‘cloud language’ etc., the etymology is not unanimously accepted. In this language déh is not homophonous with ‘cloud’ but with ‘grease, fat; tasty’ and so dí’zdéh might be considered a ‘tasty language’. Though the second part of the language name goes back to a Zapotec ethnonym, most Zapotec people today feel a closer affiliation with their town and more strongly identify with their municipality rather than with a larger Zapotec ethnic group.

The Miahuatec Zapotec language started to spread vía migrations south towards the coast in the century prior to the Spanish invasion and these migrations continued during the colonial period. Even today there is southerly movement of Miahuatec-speaking people into the Loxicha region. These migrations have led to dialect diversification and Miahuatec Zapotec today might be considered a complex of emergent languages. Dialectological affinities suggest that the variety or emergent language spoken in San Agustín Loxicha may have arrived there from the east, perhaps in or near the Ozolotepec region, whereas San Bartolomé Loxicha is more conservative and shows affinities with Miahuatec dialects to the north, from Santa Lucía Miahuatlán to Santa Catarina Cuixtla and further north.

The status of this variety as a mutually intelligible dialect of Miahuatec vs. a distinct language is somewhat ambiguous and both opinions are voiced by different speakers of this and other varieties with which it is in contact. When residents of San Bartolomé come into contact with the San Agustín variety, speakers from San Bartolomé often make accommodations towards the other dialect, or other times switch to Spanish. In general younger speakers rely more on Spanish than older speakers. Spanish is usually used to communicate with the Coatec Zapotec speakers to the west. Historically, there may have also been contact with the now-extinct Pochutec Nahua which was spoken nearby until the early twentieth century.

Miahuatec Zapotec is endangered, but it is still spoken within the context of a culturally conservative community.

This deposit contains material on the cornfield blessing ceremony practiced by the xa’yint, the 260-day Zapotec ritual calendar, traditional folklore, ethnobotany, onomatopoeia and phonology. In many cases these are raw materials which have been processed for published work elsewhere and thus this ELAR deposit is an important resource for readers and users of those materials. For example, a forthcoming book by Emiliano Cruz Santiago, Moód kéh’ mén noó tixu’t mén dí’z déh noó na’r kwent – Para leer y escribir el zapoteco de San Bartolomé Loxicha con cuentos, is a collection of glossed and translated texts collected from different elders.

The collection represents a rich documentary including as much high quality video linguistic and cultural documentation as possible. In cases where participants do not wish to be video-recorded, audio recordings were produced instead.

With the help of the presidency of San Bartolomé; Loxicha and other interested citizens, particular speakers were selected to visit and record (with their permission) as they told folktales and interesting details of local history, demonstrated how to prepare foods important to Zapotec gastronomy, how to make traditional implements including textiles, performed rituals, visited unexplored archaeological sites, hiked through the wilderness while pointing out particular flora and fauna and discussing their role in local culture, identified constellations in Zapotec astronomy, and more. In most cases, multiple speakers were present to facilitate conversation and more natural use of language.

Before the research underpinning this collection, Rosemary Beam de Azcona had worked with other varieties of Miahuatec between 1997 and 2005. She is an expert on neighbouring Coatec Zapotec language and can use her knowledge to recognise loanwords and other contact phenomena with this other Zapotec language, which is thought to have been in the Loxicha region much earlier than Miahuatec.

None of the data in this collection may be used as evidence in a court of law.

Fieldnotes and recordings will also be deposited with

If possible, the materials will also be archived with a Oaxacan archive.

Finally, a project website will be created and in every case where the consultants give their consent, the digital recordings will be made available over this internet site. The internet site will also host a searchable lexicon, images, and information about the community and the project.

Users of any part of the collection should acknowledge Rosemary G. Beam de Azcona and Emiliano Cruz Santiago as the principal investigators, the data collectors and the researchers. Users should also acknowledge the Endangered Languages Documentation Programme (ELDP) as the funder of the project. Individual speakers whose words and/or images are used should be acknowledged by respective name(s). Any other contributor who has collected, transcribed or translated the data or was involved in any other way should be acknowledged by name. All information on contributors is available in the metadata.