A documentation of Gurene folk tales, riddles, songs, palace genres and other oral genres in Bolga 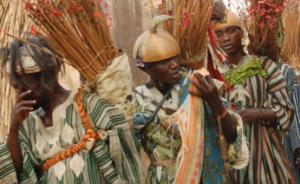 Landing page image for the collection ’A Documentation of Gurene Folk Tales, Riddles, Songs, Palace Genres and other Oral Genres in Bolga’. Click on image to access collection.

This project is a collection of video and audio recordings documenting the rich traditional heritage of folktales and sung folktales in Gurene, a language spoken in Ghana. It contains recordings of folktales and documentations of traditional rituals, including marriage and funeral rites and important cultural events, such as the installation of a new Chief.

This project seeks to document oral genres in the Bolgatanga dialect (Bolne) of Gurene (the depositor’s native language). Bolne is spoken in the regional capital of the Upper East region of Ghana, Bolgatanga, and a few surrounding villages. There are five major dialects spoken in this area usually classified under a cover term, Farefari (anglicized as Frafra) spoken in five major towns (Bolgatanga, Tongo, Bongo, Kongo, and Kandiga) (Nsoh 2008). There appears to be little confusion of the language name: Ethnologue and some authors have used Farefari and Gurene interchangeably. The different dialects of Farefari are Gurene, Talni, Booni, Nabt, and Nankani respectively. The other four dialects show differing levels of mutual intelligibility with Gurene. Talen and Nabt are less mutually intelligible with Gurene but Nankani and Booni have a high degree of mutual intelligibility with Gurene. The Gurene dialect itself has a number of varieties that are recognizable and distinct and are often associated with a particular village. For example, we have Bolne (Bolgatanga), Zuruane(Zuruango), Sumbrone(Sumbrongo), Zagene(Zorkor), Veene(Vea), Yerene(Yorongo), and Zaarene(Zaare). Speakers of each variety understand the other varieties at a functional level. Bolne is of interest in this project because it is the variety that has had intense language contact with English and Hausa. This contact is one of the forces that is leading to loss of oral genres. This is because Bolga is an urban centre. According to the Bolgatanga Municipal District Assembly sources (2008) about 22,000 are speakers of the Bolgatanga variety. Other closely related languages to Gurene are Dagaare and Moore spoken in neigbouring Burkina Faso.

Most speakers, especially the younger generation, now find it difficult to speak fluently in Bolne and resort extensively to code-mixing between Bolne-Hausa-English. Several aspects of the expressive power of the Bolne variety, as well as indigenous knowledge systems enshrined in the dialect, are highly endangered. Oral genres such as folktales, riddles, ritual texts, divination texts, and verbal art forms are fast disappearing due to the impact of modern life, motivated by a desire to adopt western values and commodities. For example, traditional folktale and riddle sessions which used to be major verbal art forms narrated in the evenings by elders and grandparents with children sitting around listening to acquire moral and character training have been replaced by television and video viewing. Unfortunately, there are no recorded and archived versions of these folktales. A Roman Catholic Priest, late Rev Fr Armand Libel did record over 200 folktales in the Booni dialect in the early 1970s on about 50 cassettes that were kept in the Bolga Catholic Mission. But these cassettes are unusable today because of poor storage and the effects of the hot tropical weather conditions. It is important to document these oral genres because they contribute to the community’s collective linguistic and indigenous cultural heritage.

A characteristic feature of this collection is its presentation of traditional folktales and its many stories about the relationship between animals and humans, and between humans and the spiritual world, often containing moral lessons. This is enriched with pictures and videos showing the speakers during the recordings of these stories and songs, giving a vivid impression of the Gurene people’s lives.

The collection boasts a large number of audio files, linked up where relevant with associated video files and/or ELAN transcription files. Generally, in the video files singers, dancers, and other performers can be seen during recording sessions of folktales and songs. Many images are included as well, bundled according to the date on which they were taken.

This project adopts a documentary approach and seeks to collect annotated audio-visual recordings of different oral genres in the Bolgatanga variety of Gurene for documentation and archiving. The depositor collected audio and video recordings of naturalistic data which include folktales, riddles, and daily conversations.

Three principal consultants were involved in the elicitations, two groups (at least 5 in a group) of narrators for the folktale narrations and a research assistant. The equipment used for the recording included a digital Audio recorder Marantz PMD 670 model, Canon video Camcorder, and Canon Powershot Digital camera (SX110) for still pictures. The depositor used ELAN to transcribe and annotate the audio and video recordings. Here, the objective was to make a documentary corpus of both audio and video materials with transcriptions, multi-tier annotations, and translations.