Documentation of Kim and Bom Languages of Sierre Leone (DKB) 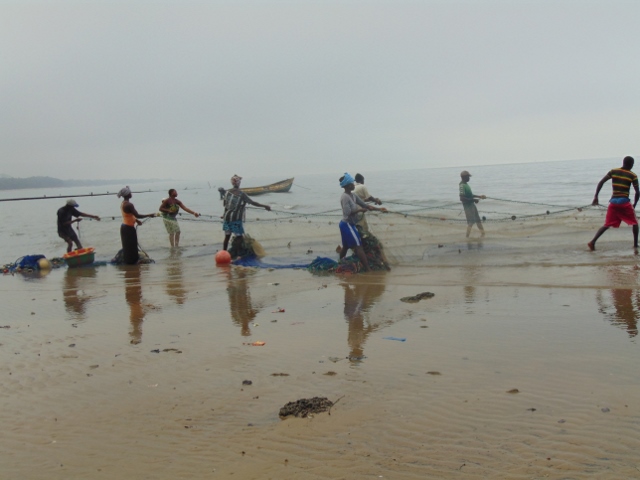 Landing page image for the collection ’Documentation of Kim and Bom Languages of Sierre Leone (DKB)’. Click on image to access collection.

This project documents two dying languages spoken in the coastal tidelands of south-eastern Sierra Leone. Only a few speakers use Kim (Krim) while only a few more know Bom; all are bilingual in Mende, the dominant language ion the area. The languages survive only in the remaining speakers’ memories since the languages are no longer spoken on an everyday basis. Documentation of the language and culture is achieved by means of multiple media, performed collaboratively with the Kim and Bom people themselves. In addition, Western graduate students, as well as students and lecturers from the national university have been trained and actively participated in the project. All recordings have been digitized and archived both locally and internationally. These products will form virtually the only documentation of the people and their language and could also provide the basis for revitalization.

The Bom-Kim people have been buffeted about by people in the interior (expansionist regimes who forced them out of their homelands), as well as by people on their shores (slavers, colonizers). The result has been the abandonment of their historical language and their complete shift to Mende, the dominant language of the Southern Province and as of 2019 the government of Sierra Leone. Few adults and no children presently speak the language; the elderly speakers are somewhat limited in their competence. The Bom-Kim people depend primarily on cassava and sometimes rice for their nutrition, supplemented by seafood from both inland waterways and the ocean. Fish are smoked and sold at local markets or to buyers from the metropolis. Other cash crops include hot pepper (melegueta or alligator pepper) melon, and palm oil, though most is consumed locally). Culturally the people were once matrilineal, and there are still traces of matrilineality in names and property rights. In addition to owning and inheriting property, women serve as civic leaders both on the traditional side (chieftaincies) and on the national level. Though much reduced, initiation societies for both boys (Poro) and girls (Sande) are held regularly. The details of Poro are much more tightly guarded than those of the Sande. Labor is generally gender-determined. As shown in the videos, men plant and harvest the rice, the women transport it to where it is threshed, the men thresh it, and the women haul away the chaff. Men fish, women cook, etc. It is boys who go to school, where schools exist. The Bom-Kim people are for the most part illiterate and are peripheralized by the dominant Mende culture, most of them having already assimilated to the Mende. Few have risen to positions of political power, certainly none who actually speak Bom-Kim.

Originally thought to be two languages, Bom and Kim (a.k.a. “Krim”) has been shown to be a single language now known as “Bom-Kim”, closely related to Sherbro. These languages along with Kisi and Mani belong to the Bolom sub-group of Mel, which together with Temne and several Baga languages, form an independent branch of Niger-Congo.

Except for Kisi, which is spoken far inland in the Forest Region of Guinea, the Bolom languages are all spoken on the coast pushed to the sea by the Mande Expansion and various jihads. The languages likely formed a more coherent whole before the dissolution of the Mail Empire in the 16th century and the coastal enterprises with European colonizers.

All speakers of Bom-Kim are at least bilingual in Mende, a widely spoken language in southern Sierra Leone, and many speak Krio, Sierra Leone’s major lingua franca. No children grow up speaking the language and all speakers are fifty years old or older.

Of some interest is the recording of Alfred Moiwo, who pretended that he could speak Kim. His data formed the basis for a paper,

2012. How to pretend you speak a dying language when you don’t really know how to speak it: Methodological worries in documenting dying languages. Proceedings of the 6th World Congress of African Linguistics (WOCAL 6), Cologne, 17-21 August 2009, ed. Matthias Brenzinger and Anne-Marie Fehn: 75-90. Köln: Rüdiger Köppe.

which has been widely circulated. After being updated, the paper will reappear in an issue of Language Documentation and Description, ed. by Peter Austin.

Bom and Kim Documentation Archives (Note: The languages were kept distinct until after the project was completed.)

• 2010. The Bom and Kim people. A video documenting the people of the Kim and Bom chiefdoms participating in the Documenting Kim and Bom Project 2007-10.

All housed in digitized form at the Endangered Languages Archive, School of Oriental and African Studies, University of London.

Some preliminary data was collected during a pilot study in 2006, but data collection and processing took place primarily over the course of the grant itself 2007-10. (I also received a grant from the NSF.)

Some filming was done by project members but high quality video and editing was done over a few weeks in 2009 by Bart Childs, Senior Executive Producer, Voice of America, aided by a subvention from VoA.