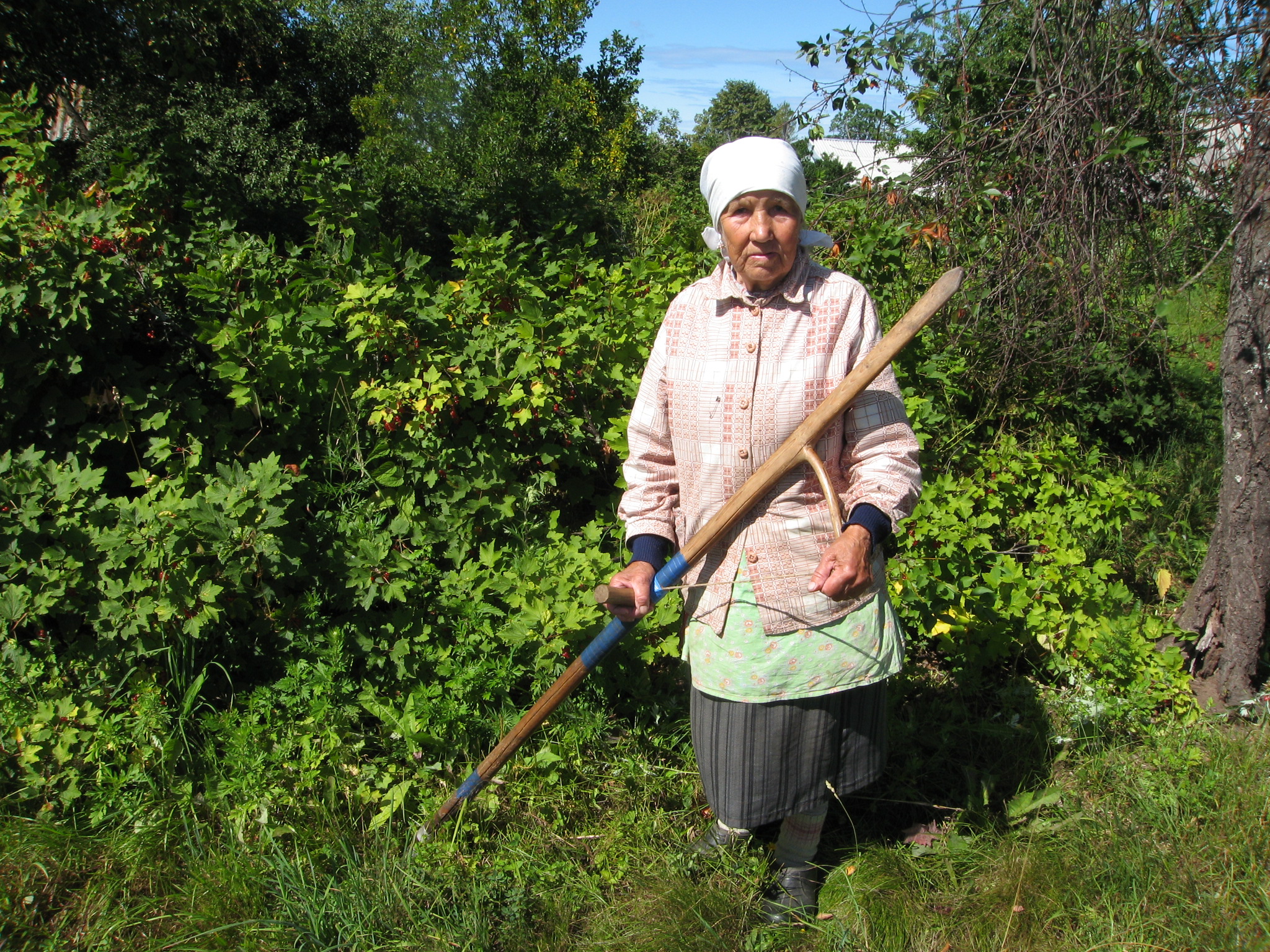 Ingrian is a northern Finnic language (the Uralic family) most closely related to Karelian and Eastern Finnish. It used to have four dialects, of which Oredeži and Hevaha are already extinct. At present, it comprises two dialects, Soikkola and Lower Luga, which differ significantly from each other. Lower Luga Ingrian is in fact a specific convergent language that developed in a multilingual area on the basis of Ingrian and Votic with some influence from Ingrian Finnish and Estonian.

By our estimation, the total number of Ingrian speakers was less than 100 people as of 2011, and less than 20 people as of 2018. The average age of the speakers is more than 80 years. There are very few speakers in the younger generations; the youngest speaker was born in 1980. Children neither speak, nor understand Ingrian. For all remaining speakers, the main language of communication is Russian. Ingrian is no more used in everyday communication, and it is on the verge of extinction.

Ingrian contributes to the general typology with some rather rare phonological phenomena: a ternary contrast of consonant lengths in the Soikkola dialect and unvoiced vowel phonemes in the Lower Luga dialect.

Votic is a southern Finnic language. Traditionally, Votic has been divided into four dialects: Krevin, Eastern Votic, Kukkuzi Votic, and Western Votic. By the beginning of the 21st century, only a handful of speakers remained. They represented the westernmost varieties of Western Votic and Kukkuzi Votic (which is in fact a Votic-Ingrian mixed language). As of 2018, there are no fluent speakers left to our knowledge. From the point of view of field linguistic studies, the Votic language should be considered extinct.

Ingrian Finnish comprises a large heterogeneous group of varieties spread on the whole territory of Ingria (the Leningrad Oblast of the Russian Federation, from the Narva river up to Karelia). The speakers are the descendants of the Finnish immigrants who settled in the area in the 17th century. The information on the dialect is very scarce. There are no more than 500 speakers; most of them were born in the 1930s, the average age approaches 80.

Some of the recordings represent mixed idiolects (most of all, Ingrian-Votic and Ingrian-Ingrian Finnish). The collection also contains a few records of the Veps language (northern Finnic), Estonian and Southern Estonian (southern Finnic).

Short description of the collection

Documenting Ingrian and other Finnic varieties spoken in the Leningrad Oblast of the Russian Federation.

The project was carried out in 2011-2013 by Fedor Rozhanskiy and Elena Markus. Initially, the work was focused on the documentation of the Ingrian language, but later the scope was broadened to include other Finnic varieties spoken in the Leningrad Oblast of the Russian Federation, first of all, the Votic language and the Ingrian dialect of Finnish.

The collection provides 1) new data recorded in the course of the project from contemporary native speakers using high-quality audio and video equipment; 2) legacy materials collected by previous researchers. The resulting collectioncomprises about 510 hours of audio recordings and 21 hours of video. Each recording is provided with a detailed metadata file specifying the sociolinguistic background of the speaker, the history of the recording, and its contents.

Ingrians and Votes are the indigenous population of Ingria (currently, the Leningrad Oblast of the Russian Federation). The first references to Ingrians and Votes in official records come from the 11th and 12th centuries. In the middle of the 19th century, there were more than 5000 Votes and more than 18 000 Ingrians. By the first quarter of the 20th century, the Votic population decreased significantly, but the number of Ingrains did not change much.

Crucial changes that resulted in almost complete extinction of both languages during one generation started with World War II. In 1943, Germany and Finland signed a treaty that assumed deportation of the entire Finno-Ugric population from Ingria to Finland. Finland was in need of manpower because of the war, but in Finnish literature, the deportation was later described as a rescue mission aimed at saving related nations. Though officially the relocation was voluntary, in fact, people were given no choice. Several villages tried to hide in the forest and escape the deportation, but only a handful succeeded. On their way to Finland, a great many people died from diseases and hunger. In 1944, Finland signed a peace treaty with the USSR, and most of the deported Finnic people wanted to return to their native places. After crossing the border, people were informed that they were not allowed to return to their villages. Instead, they were distributed in several neighboring regions (Kalininskaja, Velikolukskaja, Jaroslavskaja, Pskovskaja oblast). When the war was over, those who had close relatives in the army were able to come back, but for the rest coming home was prohibited until the mid-1950s. Many people relocated to Estonia. By that time, Votic and Ingrian villages were populated with people from Russia, Belorussia and other Soviet Republics, who often treated the Finnic population as newcomers. The attitude towards Finnic languages was very negative. Parents tried to speak only Russian if their children were present. Consequently, people born in the first half of the 1930s are the last generation of fluent speakers.

The collection consists of six collections, all prepared for archiving by Fedor Rozhanskiy and Elena Markus.

The collection compiled by Elena Markus and Fedor Rozhanskiy (Tartu, Estonia) contains about 120 hours of Ingrian (Soikkola and Lower Luga dialects) and Votic (Lower Luga varieties) recordings. The major part of the collection was recorded in 2011-2013. There are 3 types of files in the collection:

The collection includes both samples of spontaneous speech (narratives and dialogues), and elicitations (phonetic and grammar questionnaires, nominal and verbal paradigms).

The collection by Mehmet Muslimov (Saint Petersburg, the Russian Federation) contains more than 245 hours of recordings made in the Lower Luga area. Muslimov recorded minor Finnic languages spoken in the area, including the Lower Luga dialect of Ingrian, the Lower Luga varieties of Votic, the mixed Votic-Ingrian Kukkuzi variety, and the Lower Luga varieties of the Ingrian dialect of Finnish. There are also a few recordings of the Veps and South Estonian languages made in the same region. The recordings were made in 2000-2005 on a cassette recorder. The materials include talks on various topics (mostly, “festivities”, “food”, “school education”, “local languages and folk linguistics”), and elicitations of dialectal vocabulary, paradigms and simple sentences. Muslimov visited almost all the villages in the Lower Luga area that had (remnants of) Finnic population in the beginning of the 21st century, and worked with most of the speakers. This is probably the largest collection of recordings of the Lower Luga varieties, and it is extremely valuable for the study of language contact, dialectology, history and culture of the region. Unfortunately, the quality of the recordings is not always high.

3) Collection from the Institute of Linguistics, History and Literature of Karelian Research Centre, the Russian Academy of Sciences (Petrozavodsk, the Russian Federation)

This collection contains more than 65 hours of recordings made by folklore researchers (Eino Kiuru, Elina Kylmäsuu, and others) in the late 1960-s – 1970-s. The major part of the collection represents the Ingrian language (Soikkola, Lower Luga and the now extinct Hevaha dialects). There are also recordings of Ingrian Finnish and several Votic recordings. The materials were recorded on reel-to-reel (sometimes cassette) recorder and were digitized by the Institute under the agreement made in the course of the MDP project. The collection covers various genres of Ingrian folklore including songs, laments, riddles, folk rhymes, and proverbs. There are also interviews with the speakers about traditional ceremonies and beliefs.

The materials were digitized by the Institute of Linguistics, History and Literature of Karelian Research Centre (the Russian Academy of Sciences). Metadata were provided by the Institute, Ilya Nikolaev, Fedor Rozhanskiy and Elena Markus.

The collection compiled by Enn Ernits (Tartu, Estonia) contains about 23 hours of recordings of Finnic languages: Ingrian (Soikkola and Lower Luga), Votic, Veps, and Karelian. The recordings were made in 1971-1986 on a reel-to-reel recorder and later on a cassette recorder. Most of the recordings are talks of the interviewers with the speakers on various topics, the main focus being folk medicine, folk astronomy and folk music. The interviewers are Enn Ernits, Tiiu Ernits, and occasionally other Estonian researchers, among them Paul Ariste. The interviews are done in the speaker’s language.

The materials collected by Ilya Nikolaev (Saint Petersburg, the Russian Federation) comprise about 20 hours of Ingrian recordings. A major part of the data represents the Soikkola Ingrian; a few recordings represent the Lower Luga dialect. The recordings were made in 1996-2002 on a mini-cassette recorder. Most of the recording sessions are the interviews of Nikolaev with the speakers on different topics (life in the village, deportation to Finland, fishing process, traditional festivities, the Ingrian language, personal biographies, and other). Several recordings contain elicitations of basic grammar and vocabulary.

The collection compiled by Natalia Kuznetsova (Saint Petersburg, the Russian Federation) contains about 30 hours of Ingrian recordings (Soikkola and Lower Luga dialects). Additionally, there is one recording session with the speaker of the Kukkuzi variety. The recordings were made in 2008-2012 on a digital recorder. Most of the data are elicitations of nominal morphology and phonetic questionnaires. Some of the recordings are interviews in Ingrian and Russian.

The overall amount of data for the six languages represented in the collection are as follows:

Since the owner of each collection in the collection has preserved full rights on her/his materials, full or partial publication of any materials requires the owner’s permit. Each metadata file specifies the owner of the particular recording and the email address, which can be used for contacting the owner.

We are tremendously grateful

for their advice and support.