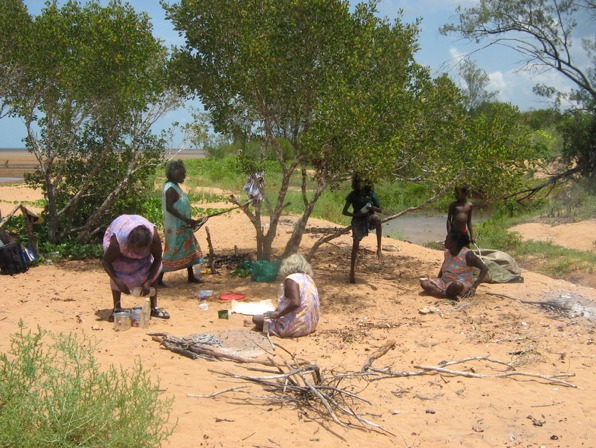 This research project studies Enindhilyakwa (also known as Anindilyakwa), spoken by about 1500 people on Groote Eylandt, Northern Territory, Australia. It has two main aims: (1) documentation and analysis of the complex morpho-syntax of this language; and (2) development of a learner’s grammar that can be used for language maintenance and future literacy programs.

Enindhilyakwa is a polysynthetic language, allowing a high degree of complexity in its word structure. It is endangered because of cultural breakdown, illiteracy, lack of teaching material and growing influence of English. This is manifested in the fact that the more complex forms are no longer being used by younger speakers today. This project focuses on the documentation of this morpho-syntactic complexity.

Capell (1942:376) considered Enindhilyakwa, together with the neighbouring language Wubuy (aka Nunggubuyu), to be “the [two] most complicated languages in north Australia, perhaps in the whole of Australia”, which may be due to the interaction of the phonological system and the rich morphology. Much of the morphological richness of this language is currently under threat of being lost, as many of the more complex forms are no longer used by the younger generations.

By comparison with most Australian languages, Enindhilyakwa has many speakers, so it has a good chance of survival. The chances will be increased by heightening the community’s awareness through their involvement in a good documentation programme, and through providing resources which they can use in language maintenance, such as a learner’s grammar.

This project is supported by the Enindhilyakwa Land Council: on 6/11/2007, the traditional owners approved of my request to study and document their language and to do fieldwork on Groote Eylandt.

Enindhilyakwa is the language of spoken communication, as well as of religious and ceremonial practices. It still is the first language of children. However, the language is endangered because:

Comparatively little work has been done on Enindhilyakwa. Below is a rather comprehensive list (all work involves data collected up to about 20 years ago). In addition, many texts and stories have been collected by Judith Stokes and Julie Waddy during the past 30 years, some of which have been transcribed and analysed.

Enindhilyakwa songs have been recorded by Alice Moyle in the 1960s and 70s, which are deposited at the Australian Institute for Aboriginal and Torres Strait Islander Studies (AIATSIS) in Canberra (ref. MOYLE_A11; A18; A24). Some of these have been transcribed by Judith Stokes (ref. STOKES_J01).

Judith Stokes and Julie Waddy have recorded clan and church songs, some of which has been transcribed (ref. GROOTE_E01).