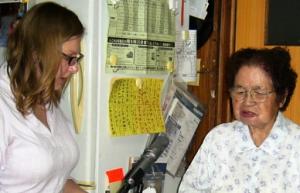 Based on legacy materials and new recordings of the last speakers of the Saru dialect of Ainu, this collection includes two corpora with time-aligned transcriptions, translations and annotations, including various genres of folktales.

Speaker of the Saru dialect of Ainu. Saru is nearly at present, as only a couple of persons aged 80-90 on the South of Hokkaido Island in Northern Japan remember their native language.

Ainu was a spoken language until the 1950s; now all the Ainu speak Japanese in everyday life. The exact number of the Ainu is unknown because questions about nationality are not included in the Japanese censuses. According to the survey of actual living conditions of the Ainu held by Hokkaido Government, Department of Health and Welfare in 1999, the number of people on Hokkaido who identified themselves as Ainu was 23,830, which is probably only a half of the real number. There is also a considerable Ainu population on Honshu Island concentrating mainly in the Kanto area; thus the overall number of ethnical Ainu in present-day Japan is likely to reach 100, 000 (Nakagawa p.c.)

In the beginning of the 20th century, the Ainu experienced severe ethnic and linguistic repression from the state which led to the rapid abandonment of language and its eventual loss by succeeding generations of the Ainu.

There is a very strong demand for Ainu texts of a ‘new generation’, i.e. fully glossed and annotated texts with both English and Japanese translations and attached audio files, to enable their use by the international community of scholars and, of equal or greater importance, by the Ainu community itself.

When complete, the collection will include

Anna Bugaeva has worked with Mrs. Ito Oda (1908-2000) from July 1998 to June 2000. From this work, there are fifteen folklore texts, one personal narrative, answers to numerous questionnaires for eliciting reciprocals and other grammatical phenomena, and a lexicon for parts of the body and body functions. The research resulted in several articles and a monograph ‘Grammar and Folklore Texts of the Chitose Dialect of Ainu (Idiolect of Ito Oda)’ (Bugaeva 2004).

Prof. Nakagawa has worked between 1977 and 1988 with Mrs. Kimi Kimura (1900-1988, born at Penakori Village, upper district of the Saru River), a very talented speaker and story-teller, whose proficiency in Ainu considerably surpassed that of Japanese. These recordings constitute previously unpublished and still unprocessed audio recordings of Ainu folktales (genres uweperker ‘prosaic folktale’, kamuy yukar ‘divine epic’, yukar ‘heroic epic’) of the Saru Ainu dialect (South Hokkaido). The total recording time of the Ainu folktales proper to be deposited at the digital archive is about 10 hours, but the overall recording time (raw data) of Mrs. Kimura’s speech containing repetitions and explanations of texts in Ainu and Japanese is over 100 hours.

The newly prepared materials for this collection were recorded during Anna Bugaeva’s two-year documentation of the Saru dialect of Ainu during her ELDP postdoctoral research project.

The materials will also be archived at Chiba University and the Ainu Cultural Center in Tokyo.