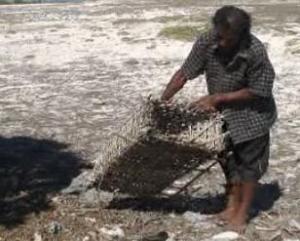 This project documents folk tales and procedural texts in Dhao. This project produces a text collection with a glossary of Dhao-Indonesian. Dhao is one of the Austronesian languages spoken in the Dhao and Nuse islands near the western part of Roti Island, Indonesia. This project was funded by the Endangered Language Fund (ELF), New Haven, CT, USA for the period of July 2008 to June 2009. The host of this project is the Agape Indah Language and Culture Center, Kupang, Indonesia.

The collection contains transcribed and untranscribed sessions, which include both folk tales and procedural texts.

The folk tales include historical stories about the first settlers, early wars, ancient kingdoms, and important Dhao people, as well as life lessons, such as respecting your parents, and a tale of a mouse lying and eating a turtle’s brain. There are several instances where more than one person has shared a story with a very similar topic, for instance the ‘fence in sea’ story, and the ‘first settlers’ story are each told on separate occasions by separate people.

The stories are mainly told in Dhao. However, some Indonesian words are also used, for instance, when a consultant did not remember the Dhao words in that context.