The Analysis of Golpa Stories 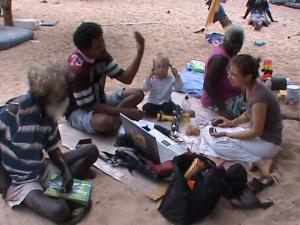 Landing page image for the collection ‘Upper Napo Kichwa: documentation of language and culture’. Click on image to access collection.

The aim of the project was to produce an annotated and illustrated Golpa story book about the Golpa people, their land and culture. Golpa is a severely endangered Yolŋu language (Yirritja moiety) spoken on Elcho Island, Northern Territory, Australia. Most stories in the book are part of a huge collection of audio recordings made back in the 1960s by Bernhard Schebeck. The narrator of these texts is the father of the very few remaining Golpa clan members who still speak and understand the language to a considerable extend. Until this project these texts had never been processed. The recordings reveal and document linguistic and cultural knowledge about a dying Australian indigenous group which is now accessible to the community as well as to researchers. The collection also contains recordings from current speakers. This project was the first attempt to document and describe the Golpa language and culture.

This work is the first attempt to document and describe the Golpa language and culture.

The collection mainly consists of analyzed Golpa stories. Seven of them are part of the “Golpa story book”: They are about Golpa clan history, the Golpa’s ancestral ties to the Wessel Islands and to Elcho Island, about hunting, the locations of water holes and about various Yolŋu languages. One story is about Djingulul’s last trip to the Wessel Islands, his birth place.
The texts not included in the “Golpa story book” are descriptions of maps, pictures and videos, re-tellings of a story in a children’s book, a narration concerning a childhood memory, a (Christian) prayer and a worship song.

(Golpa texts are represented by the standard Yolŋu orthography which was introduced by the missionary Beulah Lowe in the 1960s.)

The “Golpa story book” contains seven texts. Five of them were recorded by the linguist Bernhard Schebeck in 1966 and stored with AIATSIS in Canberra, Australia. The speaker was Djingulul, the father of Juliane Kabisch-Lindenlaub’s three main Golpa consultants. The other two texts stem from Muthali/Barripaŋ (the last fluent Golpa speaker): One was written down in 1987 by a (now deceased) Warramiri lady during a Yolŋu workshop (Batchelor College, NT). The other text was recorded by Juliane Kabisch-Lindenlaub in 2011.

The dictionary and the story book can be consulted online in the following link: http://ausil.org/Dictionary/Golpa/lexicon/index.htm.