Description and Documentation of Avatime 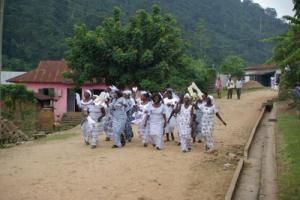 Landing page image for the collection “Description and Documentation of Avatime”. Click on image to access collection.

Video and audio recordings of spoken Avatime. The recordings are of various genres such as ceremonial events, personal stories, route descriptions, folk tales, conversations, recipes and speech elicited using various materials. Part of the corpus has been transcribed and translated using ELAN. There is also a word list in Toolbox.

Avatime, mainly the village of Vane

Avatime belongs to a group of languages called Togo Remnant, Central Togo or preferably Ghana-Togo Mountain (GTM). The languages have often been treated as a genetic group (Heine, 1968) and classified as Kwa, Niger-Congo. Blench (2001), however, suggests that the GTM languages are a typological group, consisting of four genetic clusters. Avatime is most closely related to Tafi and Nyangbo.

Avatime is spoken in seven villages in the Volta Region of Ghana by 24,000 speakers (Gordon 2005). The Avatime language is bordered to the west by Tafi and Nyangbo, to the north by Logba and to the east and south by Ewe. Ewe is the dominant language in the region. Most Avatime speakers also speak Ewe and English. Ewe and English are used at school, in church and on the radio and television. Ewe is used as the main language of commercial interactions. Avatime is only spoken in domestic and traditional domains of use. It has no standard orthography.

This is currently the only available collection of digital recordings of the Avatime language.

Linguistically, Avatime is a very interesting language. Some features of interest are complicated tonal and vowel-harmony systems, doubly articulated fricatives, verb serialization, two classes of adpositions and a Bantu-like noun-class and concord system.

We collected a total of 33 hours and 40 minutes of recordings, 14 hours of which contain video as well as audio data, covering a wide range of situation types. We have also arranged for our data to be archived at the University of Ghana and are working on a way for it to be kept in Vane, the village where we were based on our field trip.

We recorded several public events of cultural significance, such as the Yam festival in the neighbouring village Amedzofe, a funeral, the outdooring of a new paramount chief and the oath swearing of chief of the village Gbadzeme to the paramount chief of Avatime. Not all of these events were carried out in Avatime; especially when important visitors from outside the area were present. Ewe or English was usually spoken when Avatime was not used, though traditional prayers and oaths were always done in Avatime. Shortly before we reached the Avatime lands they found a new paramount chief. This is a very rare occasion; the last paramount chief was installed in 1958 and died in 2004. It took them four years to find the new chief and we were incredibly lucky that his final capture coincided with our fieldwork. Unfortunately, the Avatime have recently shifted from performing puberty rites throughout the year to performing them only at Easter, so we were unable to record any of these rites. We were able to interview two elderly women who were knowledgeable about these rites and how they were performed in the past. In addition to these public events we were also able to record many private conversations, including several natural conversations without external witnesses thanks to one of our consultants, Sammy Oboni.

Our recordings cover a wide range of speakers, with a good mix of men and women and old and young speakers.