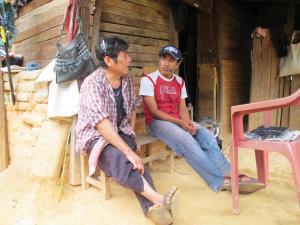 Landing page image for the collection ‘Teotepec Chatino Language Documentation through History and Culture: An Integrated Approach’. Click on image to access collection.

Teotepec Eastern Chatino is a highly endangered Otomanguean language of Oaxaca, Mexico. A strong emphasis of this project has been placed on speaker training and community participation at historical and cultural documentation. Teotepec Chatino speakers have been trained to document the language historically and culturally with the aim of producing uniquely community-focused documentation to reflect Teotepec Chatino’s rich but quickly disappearing body of narratives and procedural text. The resulting collection consists of an integrated corpus of transcribed and analyzed texts which augments previous work on Teotepec Chatino and is valuable to both native speakers and scholars.

The Chatino people of Santa Lucía Teotepec, an indigenous community in the Southern Sierra Madre mountains of Oaxaca State, Mexico.

Teotepec Eastern Chatino (aggregated in ISO-639-3 cya (Nopala)) referred to as chàʔ tnyo in the language itself. Chatino is a group of languages of the Zapotecan language family of the Otomanguean stock.

Engaging speakers in the documentation process has been a way to involve community youth in a meaningful linguistic exercise that requires the interaction of youth and elder speakers. Considering the situation of language attrition in the community and throughout the Chatino Region made this decision to engage young speakers in the documentation of their language an important form of information transfer and local language documentation training. At the most basic level this has entailed conducting writing workshops for speakers, the presentation of pedagogical materials as the descriptive analysis developed, and the presentation of comparative cognate sets for tone of Teotepec and other Eastern Chatino varieties.

The inclusion of those interested in the documentation processes and broader linguistic initiatives has created a valuable loop of knowledge that is acquired less and less through traditional means. Much the documentation of Teotepec Chatino has involved training young speakers to operate audio and video recording equipment and to use computer programs for the transcription and translation of the language. Certain consultants became adept at conducting interviews and began engaging elder speakers to discuss topics related to traditional work practices, the cultivation of local food stocks, and descriptions of traditional and culturally specific beliefs and practices. This has led to a uniquely community-focused language documentation that is represented in the following collection of texts.

The primary content of the corpus is a collection of audio recordings of a wide range of genres that includes but is not limited to: community histories; historical work practices; cultural practices; religious belief systems; the cargo system; political economy; agricultural practices; family interactions; marriage practices; midwifery, traditional medicine, advice giving; music; land use and geography; folk tales and the 1950’s civil conflict and massacre. The majority of the texts were recorded with younger community members conducting interviews with elders which would lead to a discussion type of dialogue between the speakers. Most of the audio recordings are accompanied by a transcription with a free translation in Spanish. Some of the events include photographs of the event and some include video recordings of the interviews.

In March of 2010 I was awarded an ELDP Individual Graduate Student fellowship grant (IGS0098) entitled, An Integrated Approach to Teotepec Chatino Language Documentation through History and Culture. This grant has provided me the opportunity make an extensive documentation of TEO through the creation and construction of text corpus. Community elders and others have worked with the project to document historical narratives, agricultural practices, procedural work practices, toponymic information, and ethno-botanical and medicinal information. At this point the project has produced 32 hours of recorded texts where 30 hours of these texts have been transcribed and translated.

Users of any part of the collection should acknowledge Justin D. McIntosh as the principal investigator, data collector and researcher. Users should also acknowledge the Endangered Languages Documentation Programme as the funder of the project. Individual speakers whose words and/or images are used should be acknowledged by name. Any other contributor who has collected, transcribed or translated the data or was involved in any other way should be acknowledged by name. All information on contributors is available in the metadata.