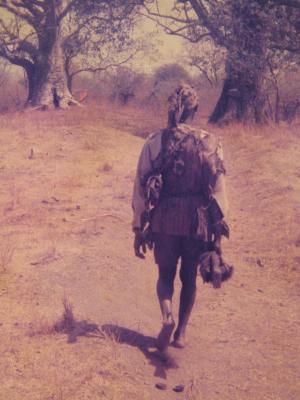 This collection includes a basic description and documentation of Siti – an endangered language of the Ivory Coast – which was claimed in 1981 to be spoken by 31 individuals.

The data collected is expected to give us an insight on the language’s vitality and endangerment in Vonkoro (9.15871, -2.73688), the only Siti-speaking village remaining. As the bulk of the information available on the language is meager and approximately 90 years old, the collection will also serve as an update of our current knowledge on the language.

This collection mainly consists of audio recordings, with images of speakers, maps of Vonkoro, and documents, from fieldwork conducted in three periods between January 2012 and April 2012.

From the researcher: ‘The starting point of this pilot project was to assess the current socio-linguistic situation in Vonkoro. In this regard, the following questions were essential: What is the degree and the quality of spoken Siti still alive? How do the Siti people distinguish the Koulango language, customs, religious beliefs, and lifestyle from their own?’

Fieldwork was carried out towards the end of the dry season, which is is the season for traditional celebrations (e.g. last funerals and rain rituals). The outcome of this project will be used to prepare a larger documentation project on the endangered Southwestern Grusi languages of Ivory Coast (Siti and Deg [ISO-639-3 mzw]) which will involve other scholars from the Institute of African Studies (Accra) and Institut de Linguistique Appliquée (Abidjan). The project may also contribute to the recognition of Siti at a national level: “endangerment” awareness is steadily increasing in West-African countries and may suggest waves of national awakening. If relevant information were available and easily accessible, Siti could benefit from revitalisation and/or preservation efforts, or at least recognition.