Investigation of an endangered village sign language in India 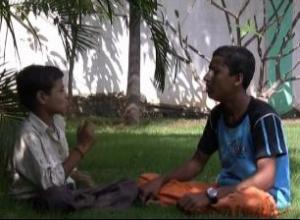 The data for AVSL, an endangered sign language in a village community, relates to a rare situation where hereditary deafness over several generations has given rise to an indigenous village sign language.

Alipur Village, in the Indian state of Karnataka, has a total population of about 14,000 people and is an enclave or Shia Muslims in an otherwise Hindi-dominated Kannada-speaking area. People in the village predominantly use Hindi/Urdu, including as the language of instruction in the local primary schools. The village has a longstanding tradition of endogamous marriage patterns, which has resulted in widespread hereditary deafness and the emergence of a local village-based sign language. The village, though not geographically isolated, exists in a state of relative social and cultural isolation from its neighbours.

There are many villages in India that have deaf individuals using various ad hoc manual communication systems known as ‘Home Sign’ (cf. Jepson 1991), but a larger and hereditary deaf population in a village has not previously been documented in India. There are currently about 250 deaf people in the village, of all age groups. All deaf villagers use the indigenous village sign language essentially as monolingual first language users, and some of the deaf adults have had limited contact with deaf people from outside the village, mostly with users of Indian Sign Language. In addition, the village sign language is used by many hearing people in the village, but the extent of their competence in, and use of, the sign language as second language users has not been established.

Indian Sign Language contains certain signs that are based on pan-Indian conventional gestures, but this cannot be taken as evidence of genetic affiliation. The village sign language is unrelated to other signed and spoken languages in the region. The sign language is used in all private and work related spheres of life by its deaf users. However, it does not have any official status either inside the village or outside, is not used in educational settings or in religious/ceremonial contexts. The prayer services in the local mosques are not interpreted into the sign language although the deaf villagers take part in the service. The sign language has no written form.

The data relates to Alipur Village Sign Language, India. Naturally, as this is a sign language, all files are video recordings. The data includes casual conversations, narratives, and linguistic elicitation on colours, number, and kinship.

This project is situated within a wider context of research at the International Centre for Sign Languages and Deaf Studies (iSLanDS Centre). The Sign Language Typology Group at the Centre (previously based at the Max Planck Institute for Psycholinguistics in the Netherlands) has had a research focus on village sign languages since 2005 and is currently broadening its research activities in this area.

The researcher undertook fieldwork, collected video data for the corpus, and functioned as the project leader. Technical assistants were responsible for the processing of all video data and for some of the corpus management duties. The consultants from the village community transcribed and translated sign language data.

The researcher also has an existing deaf community network in India, and is co-founder and trustee of the Mumbai-based Ishara Foundation, a registered charity working for better educational provisions for deaf people across India.

In addition to ELAR and the iSLanDS Centre, a copy of all data will be stored at the Ishara Foundation, at a study centre close to Alipur village. Another set of copies is to be deposited with the village community itself.