Documentation of the Saru dialect of Ainu 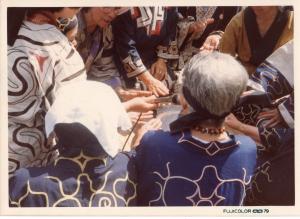 Deposit page image for the collection “Documentation of the Saru dialect of Ainu”. Click on image to access collection.

This collection includes documentation material on the Saru dialect of Ainu, a language which is nearly extinct at present.

The collection includes a corpus of previously recorded and unpublished material of Mrs. Kimi Kimura (1900-1988) recorded by Hiroshi Nakagawa in 1977 to 1983 and a corpus of newly collected audio materials with time-aligned transcriptions, multi-tier annotations, as well as translations of transcripts into English and Japanese, collected by Anna Bugaeva between 2007-2009.

The materials have also been deposited with Chiba University which serves as a mirror site.

The Saru dialect of the Southern Hokkaido Ainu group is the only non-Japonic language of Japan, and is reportedly on the verge of extinction. The genetic affiliation of Ainu is unknown; at present it is classified as a language isolate. Ainu is presumably a remnant of some very old language family and very likely a legacy of earlier cultures in the Japanese archipelago.

The Ainu language is severely endangered as only a couple of persons aged 80-90 on the South of Hokkaido Island in Northern Japan remember and speak their native language.

For more information on the language see the Foundation for Research and Promotion of Ainu Culture and the depositor’s recent work see Anna Bugaeva’s papers.

This is a digital corpus of previously unpublished audio recordings of Ainu folktales of the Saru Ainu dialect (South Hokkaido) recorded by Hiroshi Nakagawa in 1977 to 1983 with the very talented speaker and story-teller, Mrs. Kimi Kimura (1900-1988, born at Penakori Village, upper district of the Saru River) whose proficiency in Ainu considerably surpassed that of Japanese. The abundance, repertoire and tempo of the folktales are outstanding. The deposit includes 23 folktales, viz. 20 uepeker ‘prosaic folktales’ and 3 kamuy yukar ‘divine epics’. The total recording time is about 7 hours and the total number of Ainu words is 44,717 and the collection has been fully annotated.

Materials in this collection use the following labelling system:

This documentation captures the very last moments of living Ainu, and every recorded expression or even word is of great value. It is based on Anna Bugaeva’s fieldwork with the last nine speakers of Ainu (Southern Hokkaido) of different ages (from 75 to 93) who had varying levels of productive skills. Since the greater part of the fieldwork sessions was in Japanese, 437 Ainu audio pieces, provided transcriptions, Japanese and English translations and annotations were selected for depositing.

Most files contain words or short conversational phrases, while some files contain children’s songs, lullabies, prayers, fragments of folktales. The collected materials have contributed to the future study of Ainu dialects and have shed a light on the history of Ainu. They can be of interest to sociolinguists investigating problems of language decay, as well as to the community members aimed at revitalizing Ainu.

Materials in this collection are using the following filenaming system:

A Talking Dictionary of Ainu

In addition to the Corpus of folktales of the Saru dialect of Ainu by Mrs. Kimi Kimura (1900-1988) and the Documentation of Southern Hokkaido Ainu (2007-2009) collections, and as a direct response to a strong demand for Ainu conversational materials in the Ainu community which was in the process of revitalizing its language, Anna Bugaeva worked with colleagues and community members to produce a Talking dictionary of Ainu (http://hdl.handle.net/2196/00-0000-0000-0008-ED97-8).

Collecting entirely new extensive conversational Ainu data has been difficult, so Anna Bugaeva selected Jinbo, K. and S. Kanzawa, S. (1898) Ainugo kaiwa jiten [Ainu conversational dictionary] as a primary source. Tokyo: Kinkoodoo Press (278 pp). Working together with an Ainu speaker Mrs. Setsu Kurokawa (b. 1926), Anna was able to record more than 3800 audio files, revise and give new life to this old source of conversational Ainu which was otherwise incomprehensible to a broad audience because of outdated transcriptions and orthography in Japanese translations and numerous misinterpretations. This is a kind of documentation with revitalization in mind which has resulted in the creation of an online Talking dictionary of Ainu (http://hdl.handle.net/2196/00-0000-0000-0008-ED97-8), co-edited with S. Endo, multimedia by D. Nathan.

The materials were recorded in the following areas of Japan, Hokkaido prefecture: Saru district, Biratori town, Nukibetsu between 04/08/2008 and 20/08/2009.

All files (wav/tod(video)/txt/jpg) in this collection are distinguished by reference numbers 0001-3847 which are also the same in the text (Toolbox) file. Some files contain letters “a” or “b” which identify different (not interchangeable) parts of the same entry.