Ju|’hoan Audio & Video Material 1970 to Present: A Work in Progress 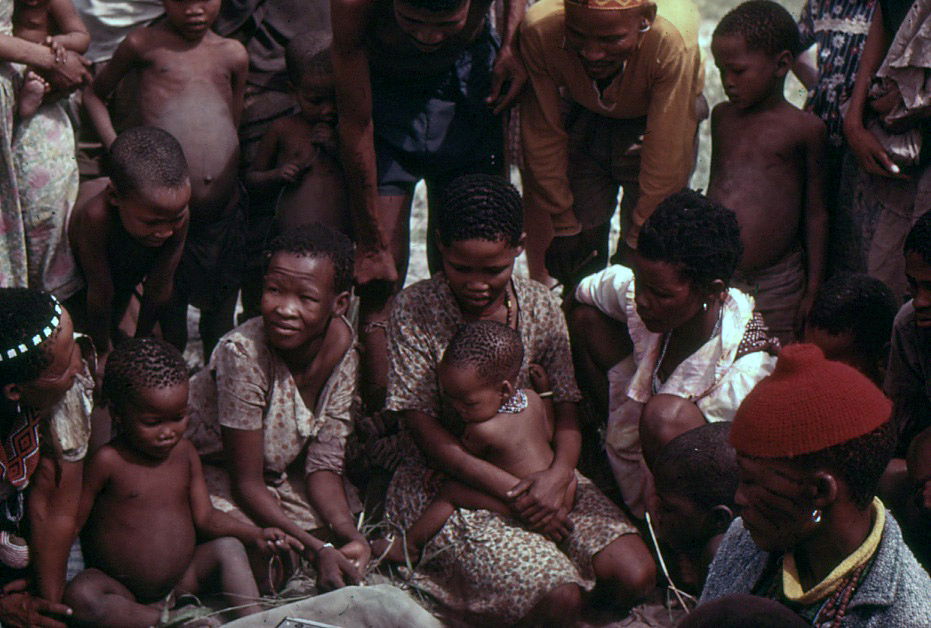 Deposit page image for the collection “Ju|’hoan Audio & Video Material 1970 to Present: A Work in Progress”. Click on image to access collection.

This project is an ongoing documentation of Ju|’hoan language, begun by Biesele in 1970, that is now a community-based initiative: the Ju|’hoan Transcription Group (JTG). The project is sited in Namibia, with Ju|’hoan [ktz] at Tsumkwe (Otjozondjupa Region), and closely related =X’ao-||’aen [aue] at Epukiro/Gobabis (Omaheke Region). Estimated speaker numbers are 11,000 and 4000 respectively. The project goals were 1) to gather further recordings/ transcriptions/ translations to extend Ju|’hoan archives at ELAR; 2) to make JTG sustainable, involving younger Ju|’hoan-speakers and scholars; and 3) to carry out PhD research on dialect diversity in the Ju-=Hoan language family, extending understanding of the entire Ju language complex.

Current estimates of speakers of the endangered Ju|’hoan (ktz)range downward from 33,600 (www.ethnologue.com) to 11,000 (Biesele and Hitchcock, 2011, p. 5), and even this latter estimate may be high. Ju|’hoan is the first language of these former foragers in NE Namibia and adjacent NW Botswana, but its future is threatened. At project site Tsumkwe, Nyae Nyae, Namibia, with 2000 Ju|’hoan, it is still learned at home and precariously holds national educational language status to Grade 4 via the Village Schools Project (VSP) begun by Biesele and linguist Patrick Dickens in 1990. The youth of the other Ju|’hoan in Namibia are losing the language due to economic/political circumstances, though it persists in religious healing. In Botswana, with perhaps 5000 speakers,
Ju|’hoan is even less esteemed by children because schooling is exclusively Setswana- and English-medium.

Ju|’hoan increasingly yields to Afrikaans, English, or Setswana in contact contexts. Nevertheless, the language has unparalleled ongoing potential for comprehensive documentation in Nyae Nyae, where the Ju|’hoan have avoided dispossession and fragmentation by creating an internationally recognized land conservancy. Ju|’hoan culture in Nyae Nyae is the most extensively studied in all anthropology, via longterm projects such as HKRP (Harvard KalahariResearch Project), which includes Biesele and, informally, her audio collection. Additionally Ju|’hoan, especially in Nyae Nyae as enabled by HKRP, VSP, and new Namibian commitment to minority radio, is now experiencing community-based revitalization.

=X’ao-||’aen [aue], also known as |Auen and Auen, is spoken by about 2000 San in Omaheke province of Namibia and by 2000 San in Ghanzi district in neighbouring Botswana (Cook, 2004). =X’ao-||’aen is a Naro exonym meaning “Northern People”. Community members, however, define themselves as “Ju|’hoan” (true people). Linguists consider Ju a language-complex as there are no clear boundaries between the different dialects. The northernmost varieties are found in Angola. =X’ao-||’aen is the southernmost variety, and thus its documentation is of utmost value to our knowledge of the Ju language-complex. The geographical position of =X’ao-||’aen and the borders it shares with other neighbouring non-Ju San communities lends itself to the study of broader Khoisan language typology. There are points of contact between =X’ao-||’aen and both Taa and Khoe languages; thus =X’ao-||’aen may have very different loan patterns from other southeastern Ju varieties like Ju|’hoan.

Ju|’hoan is cited with other Khoisan languages for the largest inventory of consonants and highest phonetic complexity among world languages. Megan Biesele, who is fluent in Ju|’hoan, spent a total of 12 years with Ju|’hoan people of both Botswana and Namibia since 1970 as ethnographer, folklorist, documentarian, and activist educator. She focuses on the information-intensive, egalitarianism-enforcing, foraging ideology of Ju|’hoan culture that is today undergoing fascinating changes reflected in narrative and political rhetoric. Interest in this topic has grown organically within the
Ju|’hoan community as it grappled with recent challenges, assisted by the Kalahari Peoples Fund (KPF) Biesele founded with Harvard colleagues.

Note that transcriptions in ELAN were provided by native speakers in the continuing project, Ju|’hoan Transcription Group (JTG).Moreover, language consultants are co-authors wherever possible, and their expertise fully acknowledged in archives.

The project in digital documentation of Ju|’hoan language and culture is the culmination of 41 years of research, audio/video documentation, and language activism by anthropologist Biesele, her, team of Ju|’hoan trainees, and linguistic consultants. It is based in community education in Ju|’hoan literacy begun over 20 years ago by Biesele and the late linguist Patrick Dickens, who provided the orthography, dictionary, grammar, and curriculum materials for the Village Schools Project and its outgrowth, the Ju|’hoan Transcription Group, both of which are in operation today.

The project will support both further field documentation (Tsumkwe, Namibia) and ongoing processing (Namibia, US) to extend Biesele’s collection of verbal art, healing narratives, and political negotiation to create an archived and web-disseminated resource for linguistics, anthropology, and the Ju|’hoan people. It aims to support the making and archiving of field recordings and elicitations in the =X’ao-||’aen areas of Epukiro and Gobabis by Pratchett in both audio and video format, to deliver full phonological analysis and to provide a complete interlinear glossing of the morphology and syntax. This data will become a concrete foundation for narratives and their subsequent translations by local people, in parallel with Biesele’s project. Pratchett’s survey of =X’ao-||’aen will also include questions of an anthropological nature which will explore the speakers’ self-perceptions of their language and of the languages of other communities. Biesele and Pratchett deem the results of such a survey as essential to a classification of =X’ao-||’aen designed to reflect its speakers.

The final goal of the projects is to create lasting, publicly available, associated collections, at ELAR and other archives, of Ju|’hoan and =X’ao-||’aen texts that are easily navigable, allow indexing by, and thus can be searched from, outside search engines; conform to the standards of the Open Language Archives Community (OLAC) for metadata tagging;and provide linguistic annotation of the text that is informative and useful in a readily accessible format for both large-scale computational processing and manual examination.

Data will also be archived locally at the Namibian government’s Community Learning and Development Center (CLDC)in Tsumkwe, Nyae Nyae. CLDC deposits for the Tsumkwe community are governed by an agreement modeled on that of the Archive of Indigenous Languages of Latin America (AILLA) in Austin, Texas.

The JTG book, Ju|’hoan Folktales: Transcriptions and English Translations, is being assessed by the Namibian National Institute for Educational Development for suitability as enrichment materials for the national school system. During 2010 material was assembled toward two more books, one of heroine cycle stories, and one of healing narratives. Each one of the texts for the books is meticulously transcribed, translated, and workshopped by the Ju|’hoan Transcription Group (JTG) for edits and metadata. At one and the same time, thus, the transcribers are creating archives that can be used by scholars such as linguists, and by their own community for heritage and curriculum materials. They and the youth trainees are now sending postings in both Ju|’hoan and English to a new,community-networking website initiated by KPF, called Kalahari Peoples Network (www.kalaharipeoples.net). Between 2002 and 2010, thus, the JTG project’s documentation of ancient lifeways AND the contemporary creativity of young San people have both been well advanced.