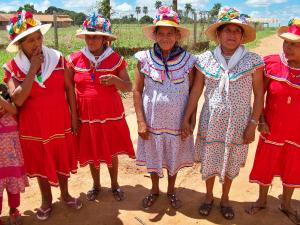 The main language documented in this archive is Paunaka, a critically endangered (cf. Krauss 2007:6) Southern Arawakan language, spoken in Eastern Bolivia, in a region called Chiquitanía. Today, there are only 11 speakers left with competences ranging from fluent to mostly passive knowledge and even one L2 speaker. However, some children of the speakers also understand or even speak a few words. All speakers of Paunaka are trilingual with Spanish and Bésɨro (more widely known as Chiquitano). The youngest speaker is over 50, the oldest over 80 years old.

In addition, the archive includes a few data on Paiconeca, the language most closely related to Paunaka, which has been extinct for very long and on two closely related and already extinct Chapacuran languages: Kitemoka and Napeka. The Paunaka people share the same history with these small groups, and people of all three ethnic groups have long lived together in the same small villages since colonization.

Ethnically, the speakers of Paunaka identify as Paunaka, but also as Chiquitano as they share the material culture and religion with speakers of Monkoka (Bésɨro) and speakers of other languages in the region and have had a common history for more than 300 years. The same holds for the Kitemoka and Napeka people.

The material on Paunaka has been very scarce up to now. Some small word lists have been compiled in the 18th, 19th and 20th centuries, but the focus of travelers and researchers in this region has rather been on Bésɨro for the last 300 years. Paunaka was thought to be extinct until Lucrecia Villafañe met some speakers in 2005.

The archive contains all information found on Paunaka prior to the PDP and the material collected and produced by the members of the PDP between 2011 and 2013. It includes audio and video recordings, transcriptions and analyses, lexicographic materials, photos, and the language material produced for the Paunaka community. In addition, some material on the languages Paiconeca, Napeka, and Kitemoka can be found here.

Topics range from the history of the Paunaka people to narratives, personal narratives and small talk between a speaker and the researcher(s).

At the moment, only a small part of the collected materials is available online. More material is currently being prepared for upload.

During early colonial times, most of the Paunaka people were settled in the town of Concepción de Chiquitos (Tomichá 2002:290), where Chiquitano was the general language just like in the other mission towns of the Chiquitanía (Adelaar & Muysken 2004:477; Tomichá 2002:290). Generally, the other languages were only used in private spaces.

For the present-day speakers, the social dominance of Bésɨro (or Monkoka, which is the name they use more often) was established when they lived in Altavista or one of the other manors in a relation of debt bondage to a patron. This is a chapter of Bolivian history that has had little appraisal up to now. However, we were told by Paunaka speakers that in Altavista, the ones who had the power knew Monkoka as dialect (dialecto), but they knew little or nothing about the other languages like Paunaka, Napeka, Kitemoka. Some foremen and other high-status personnel spoke some Bésɨro.

The greatest pressure to give up Paunaka or any other minor indigenous language came from the speakers of Bésɨro, who frequently made fun of the Paunaka when they spoke their language. This is despite the – according to assertions of Paunaka speakers – a greater number of Paunaka speakers in Altavista in comparison with Bésɨro speakers and the fact that “everybody [= all Paunaka people] spoke Paunaka”. A great number of recordings in the archive refer to this important part of the Paunaka history.

The inferior status of their language maintained until recent times when Paunaka speakers who participated in the meetings of the OICH (Organización Indígena Chiquitana) about linguistic acknowledgment felt ashamed to speak their language in public and did not claim its incorporation into the New Constitution of Bolivia from 2009.

Today, Spanish has certainly outranked Bésɨro in social and economic importance and Bésɨro is also endangered (see also the collection by Sans.)