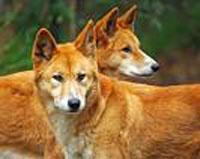 The Lajamanu community. The oldest Warlpiri speakers, those over 60 years old, have the greatest amount of Warlpiri linguistic, cultural and historical knowledge. Those in the 30-60 age group do not have the same control of this knowledge and see an immediate need for its documentation.

Warlpiri is a Pama-Nyungan language spoken by approximately 3,000 people in the Northern Territory of Australia, most of whom live in small remote communities. Warlpiri is currently still being transmitted to children, but the language situation in the community of Lajamanu shows that enormous change can take place within a single generation. In Lajamanu, people over approximately thirty years old speak Lajamanu Warlpiri, with varying amounts of code-mixing and code-switching into English and Kriol. Younger people speak a new mixed language which systematically combines elements of Warlpiri, Kriol and English, and which older adults call ‘Light Warlpiri’ (O’Shannessy 2005). Children learn both Lajamanu Warlpiri and Light Warlpiri from birth, but choose Light Warlpiri as the language of their everyday interactions. The oldest speakers of Light Warlpiri are 25-30 years old, meaning that this linguistic change has taken place within the last 30 years, and possibly within the last 15 years. The dramatic change demonstrates the urgent need to document traditional forms and usage of language as soon as possible.

Traditional ceremonies and songs are an essential aspect of Warlpiri culture and contain structures and lexical items that are not found in everyday speech or traditional narratives. During the ceremonies particular dances are performed that pertain to different songs and significant sites. The documentation of the dances, songs and narratives together will mean preservation of an important piece of cultural and linguistic heritage for future generations. It will also aid in the maintenance of traditional Warlpiri by being available to community members to watch, listen to and learn from.

According to the depositor, senior men in the community asked for ceremonial songs to be documented while the singers are still in good health. These ceremonies are still performed annually, led by the most senior men and women, but there is concern that the younger people do not know the songs well enough to lead the ceremonies when their time comes. They want to record the ceremonial songs for two purposes, a) to archive them for the future, and b) to listen to them on an everyday basis so that they can learn them. In this aspect of the documentation project, the researcher collaborated with Dr. Mary Laughren and Dr Nic Peterson, who are working on a related Australian Research Council Project on Warlpiri songs.

PAW (formerly Warlpiri Media) personnel trained some young men from the community in audio and video recording, saving and managing files, and producing CDs and DVDs. The recordings took place at the time the ceremony was scheduled to occur, between January and February 2008. A few months later the researcher returned to the community, and worked on the linguistic and sociocultural documentation, using the DVDs as data.

This project will provide copies of its documentation of Warlpiri songs on DVD and CD for community members.